The August Proceedings always focuses on the Coast Guard, and this issue is packed with hard-hitting “white-hull” content. I often tell people the Coast Guard punches above its weight in our pages—as it does, I believe, around the world. It amazes me that a force with about the same number of people as the New York City Police Department can maintain operating forces at sea 24/7, breaking ice, interdicting drugs, protecting fisheries, conducting lifesaving search-and-rescue operations, maintaining aids to navigation, and numerous other missions—from Alaska to the Arabian Gulf, the Great Lakes to the Gulf of Mexico, and San Diego to the South China Sea.

The three winning essays from this year’s Coast Guard Essay Contest are in this issue. If I have an editor’s bias, it is toward young, junior authors, so it made me happy to see three such Coast Guard active-duty authors take the top prizes this year. Lieutenant Andrew Ray’s “Employ Coast Guard LEDETS in the Indo-Pacific” (pp. 20–25) took first prize. “Send in the Coast Guard . . . and the Marines!” (pp. 26–30), by Lieutenant Commander Daniel Wiltshire, won second prize; and Petty Officer Third Class Merrill Magowan took third prize with “Create Patrol Forces Indo-Pacific?” (pp. 32–35). All three articles offer ways the Coast Guard can play an increased role in the security of the Indo-Pacific.

Last month, in the midst of the protests and social unrest surrounding recent police violence against black people, I wrote that Proceedings wants to engender a discussion about race in the military. I am happy to report that a number of active-duty and retired servicemembers have answered the call. This month’s Comment & Discussion includes a number of letters that respond to articles we have already published, and we have also received thoughtful and thought-provoking commentaries that we will publish in the coming weeks and months. Keep them coming.

China’s growing military and naval power has been a constant theme in Proceedings for the past several years. This month, Naval War College Assistant Professor Ryan Martinson writes a seminal piece on the People’s Liberation Army Navy’s plan to transform itself into a “world-class navy.” “Deciphering China’s ‘World-Class’ Naval Ambitions” (pp. 52–56) should be required reading for young navalists and demonstrates the value of the War College’s China Maritime Studies Institute, of which Mr. Martin is a core member.

I am a fan of two frequent contributors whose work appears in this issue. The first is Navy Commander Joel Holwitt, who has won several CNO Naval History Essay Contests in the past few years. This month, his “Help Wanted: Tactical Planners” (pp. 68– 72) argues for more emphasis on tactical planning skills and raising the importance of the operations officer on Navy ships to the level of the executive officer. Joel is in the submarine prospective commanding officer pipeline. Retired Indian Navy Rear Admiral Sudarshan Shrikhande is back in our pages with “For a Secure Indo-Pacific, Grow the Quad” (pp. 40–44)—a call to grow and expand the nascent Indian-Japanese-Australian-U.S. international partnership.

Finally, good shiphandling advice always has a place in Proceedings. Navy Captain Jeff Heames’s “Principles and Advice for Casualty Maneuvering” (pp. 76– 78) provides solid advice and diagrams on how to plan for and practice maneuvering a ship in restricted waters with an engineering casualty.

Next month is our annual Naval Aviation issue, which we usually distribute at the Tailhook Association’s “Hook” Convention in Reno, Nevada. Like most large gatherings, the in-person Hook ’20 has been canceled and will be held virtually instead, but free online access to the September Proceedings will be offered to all who register for the event. Fly Navy! 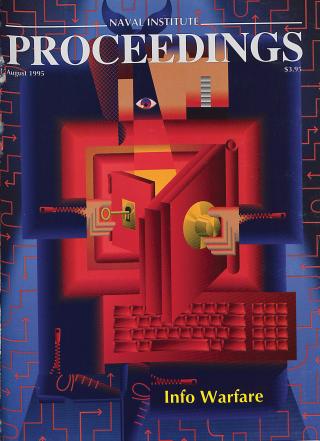 August 1920 Proceedings—In “Tact in Relation to Discipline,” Lieutenant Commander J. Ogden Hoffman, U.S. Navy, wrote, “As soon as a new officer steps aboard ship or shore the process of ‘sizing him up’ commences, and it should be mutual on his part. It will not be long before he has the opportunity of displaying his tact, or the lack of it, and if the first impression that he makes is unfavorable, he will have a hard time to live it down. At the outset he should enlist the services of his seconds in command, obtain their assistance and cooperation.”

August 1970 Proceedings—In his “Message on Departing,” Chairman of the Joint Chiefs of Staff Admiral Thomas H. Moorer, U.S. Navy, included the following: “I would like to share with all of you some thoughts on values which I have cherished through the years, and particularly those which are related to personal responsibility. Responsibility begins wherever you look for it and you find it wherever you begin to look. You begin to look for it that very day in which you realize how important it is for you to care about the world and the people who live in it.”

August 1995 Proceedings—Reflecting on military operations in the mid-1990s in “It’s Not Nice and Neat,” Lieutenant General Anthony Zinni, U.S. Marine Corps, wrote, “You no longer can be the pure, narrow, military thinker and just worry about fires and maneuver. Right now, I worry more about psychological operations and civil affairs. In looking at the full range of operations today, it’s too simple to say, ‘Just don’t do it,’ or ‘We shouldn’t do it.’ Somebody has to do it—that’s the problem. And all of today’s problems are not outside our borders; sometimes they’re simmering inside our borders.”

May brings our annual Naval Review. But in March the world changed, 2019 seems a lifetime ago, and this is the first Proceedings issue ever produced remotely.
P Editor's Page

This theme of this issue is “Fight Smarter,” but perhaps it should be “COVID-19: Month Three,” as remote work and seeing teammates only via video apps continues.
P Editor's Page

The ensuing protests, mobilization of National Guard troops, and even the short-term deployment of some regular military forces, brought the issue home to our military family.