Despite a history of warfighting, the Coast Guard has trouble explaining why it is a military branch.
By Brian Runion
Proceedings
Vol. 145/12/1,402
Featured Article
View Issue
Comments

Although the Coast Guard faces myriad challenges, ranging from an aging fleet to a small budget, there is a bigger problem lurking: The service has trouble defending its place as a fighting force. This may seem trivial, but if we cannot explain how the Coast Guard fits into the national defense constellation, how can we expect politicians and taxpayers to understand the same? How can the Coast Guard expect to secure funding for its military role when even many Coasties cannot describe what makes the service military?

The Coast Guard needs to look to its rich and largely unplumbed past, take control of its own historical narrative, and teach its service members—and then the public—the value it has provided to the nation in times of war and crisis. We must reach beyond the stories of search and rescue and the oft-repeated tale of the Coast Guard’s one Medal of Honor recipient to create a public image as a specialized military force well-suited for maritime interdiction, riverine combat, port security, and Arctic operations.

Among the services, the Coast Guard is unique in that it periodically must explain its purpose. This problem springs from its complex mission set—one that is not always at the forefront of popular culture and that often is oversimplified to “search and rescue.” To clarify its wartime role, the Coast Guard should demonstrate its specialized skills that the other services cannot provide.

This makes the Coast Guard similar to the Marine Corps in terms of its wartime organizational structure, but even individuals who understand this nuance casually refer to the Coast Guard as serving as “part of the Navy” during times of war.1 This is a damaging habit, as it makes the Coast Guard appear dependent on the Navy in wartime and undermines the narrative of the service as a military entity in its own right.

The Coast Guard’s battle for survival came immediately after World War I. In accordance with 14 USC 1, the service had transferred to the Department of the Navy for the duration of U.S. involvement in the war. Its cutters proved their value in combat against German submarines, and its aviators ran airfields in the European theater and elsewhere.2 In 1918, after the end of hostilities, Coast Guard Commandant Ellsworth Bertholf requested that control of the Coast Guard’s cutters and stations be returned to the service, to allow them to resume their peacetime duties. However, Secretary of the Navy Josephus Daniels and Assistant Secretary of the Navy Franklin Roosevelt believed the Coast Guard was redundant and that all government vessels—including tenders of the Lighthouse Service—should move under the Navy. They declined to return the Coast Guard to the Treasury, believing this to be a first step toward that end.3

Of the Coast Guard’s 240 officers, only some 24 opposed the merger. The officers had been granted temporary promotions while operating under the Department of the Navy, which would be rescinded unless the services merged.4 In addition, many believed their opportunities for advancement would be greater in the Navy.5 With the service’s own officer corps allied against independence, its odds of survival looked slim.

Many credit Bertholf’s 1919 speech before Congress with saving the service. He argued that the Coast Guard and Navy served opposite purposes—the Navy’s to destroy, and the Coast Guard’s to save—and that a merger would mean the end of the Coast Guard’s humanitarian role.6 Oddly enough, the previous Secretary of the Navy, George Meyer, had made a similar argument, believing that the Coast Guard’s peacetime duties, if placed on the Navy, would distract the Navy from preparing for war.7 What made the Coast Guard valuable, then, were the skills it honed while conducting the missions the Navy could not afford to practice: maritime interdiction, ice operations, and coastal and riverine patrols.

During this same period, the Marine Corps fought a similar battle for survival. Between 1929 and 1933, it faced a nearly 25 percent reduction in manpower, driven by an Army study claiming the Army could carry out the Corps’ duties more efficiently. To counter this, the Marine Corps built a public relations campaign using retired generals and congressman-veterans and emphasized its specialty: amphibious warfare.8 With both strong support and a clear wartime role, it was seen as a specialized service rather than a redundant one.

Marines also spoke up themselves. As one journalist noted in 1936, the Corps had created a culture where “All Marines are star reporters.” Warriors hurried back from the battlefield to broadcast tales of their exploits. This gave the small service a long reach, helped by something all Marines’ stories contained: action. Marines’ tales, the journalist argued, were full of excitement, the kind that—although romanticized—captured the public imagination.9

While the Coast Guard may not need to emphasize battlefield exploits as much as the Marine Corps, the service should find stories, both new and old, that exemplify its wartime duties. It should teach these stories as part of its indoctrination programs, so that the service’s own members—like the Marines of 1936—can serve as its biggest advocates.

To have stories to tell, though, the Coast Guard must rediscover the ones it no longer remembers, ones that show a Coast Guard going beyond search and rescue.

A History of Forgotten History

The Coast Guard has a long record of forgetting its own history, not always through any fault of its own. Aside from the loss of significant documents and artifacts to time and disaster, many of its greatest wartime achievements have been misattributed to other branches, particularly the Navy. To reclaim its history, the Coast Guard must rediscover the stories of its military past, support them with research and evidence, and incorporate them into the canon of service knowledge.

Many Coast Guard historical documents met with disaster shortly after the service’s founding in 1790. During the War of 1812, virtually all documents of the Revenue Cutter Service—including logbooks and sailing records—were burned when the British razed Washington, D.C. As a result, the history of the service’s early days is largely pieced together from letters and newspapers, with few authoritative sources to describe cutters’ exploits.10

This makes it difficult to parse out which feats in the Quasi-War with France belong to the Revenue Cutter Service and which belong to the Navy. One example is that of the cutter Pickering, which in 1799 dueled and captured L’Egypte Conquise, a French privateer with twice the Pickering’s firepower and three times her crew. As Dr. William Thiesen, the Coast Guard Atlantic Area historian, points out, many of the records and accepted histories of this battle credit Navy Lieutenant Edward Preble with leading the Pickering to victory; however, Thiesen demonstrates that Preble had left the ship several months prior, leaving Benjamin Hiller of the Revenue Cutter Service in command.11 Despite his evidence, the error remained so pervasive that, until recently, even the Coast Guard’s official history of the cutter maintained it.12

Misattributions abound in later periods as well, and they deprive the Coast Guard of stories about its military value. After World War II, documents published by the Navy often presumed that major accomplishments carried out by the Coast Guard were Navy feats. A history of the U.S. Atlantic Fleet from 1946 describes the capture of the German-controlled trawler Buskoe in the fjords of Greenland by Coast Guard Commander Edward “Iceberg” Smith as “the first blow struck by the United States Navy against Germany.”13 While this indeed was a “first blow,” and while Smith later served under the Secretary of the Navy during the war, at the time of the Buskoe’s capture in September 1941, the Coast Guard still was operating under the Department of the Treasury, effecting the capture as part of its peacetime authorities.14

Similarly, it wasn’t until 2009 that independent research by a Coast Guard officer uncovered the service’s role in creating what eventually would become the Navy SEALs. Working under the Office of Strategic Services (OSS) during World War II, the Maritime Unit leveraged the unique boat handling, diving, and signaling skills of its 75 Coast Guardsmen to carry out covert sabotage and exfiltration operations in far-flung locations from Europe to Burma. These skills were so valuable they were sought out by General William Donovan, head of the OSS, yet when the average service member thinks of the Coast Guard, he or she rarely conjures up elite teams of saboteurs destroying military outposts in a mangrove swamp.15

These, of course, are only a handful of examples. Few Coasties have heard of the Coast Guard Landing Party, a riverine raiding force that operated in the jungles of Vietnam and who, in one spectacular raid, killed 10 enemy soldiers and captured 59.16 Fewer still have heard of Patrol Bombing Squadron 6, the Coast Guard’s seaplane-bomber detachment, which flew convoy escort missions out of Greenland in World War II.17 Perhaps even fewer know that the Coast Guard served in theater during the Korean War and at least once made contact with the enemy, or that one of the Coast Guard’s predecessors, the Lighthouse Service, captured ships and planted mines during the Spanish-American War.18

Most of these events have yet to be captured by professional historians, and, unless that happens, they will remain just stories or, worse, will be forgotten. If we want them to grow into rich histories that can define the service and ensure its place in the national defense constellation, the Coast Guard needs a comprehensive, well-funded history program, capable of researching and sharing its contributions.

Glory to the Shield We Wear

The Coast Guard rarely gets recognized by other services, yet when we speak of Coast Guard heroes, we tend to judge their value based on the awards the other services have granted them. This is problematic: Our focus on only a few well-known wartime heroes, rather than the entire pantheon of lesser-known warfighters, leaves service members—and by extension, policymakers—with the impression that the Coast Guard has accomplished only a few things in wartime.

No one else will uncover the Coast Guard’s history for us, and no one else will weave it into the kind of narrative the Coast Guard must tell to demonstrate its military value. Like the Marines of 1936, Coasties must all be “star reporters,” scooping our service’s past and broadcasting it to the world. 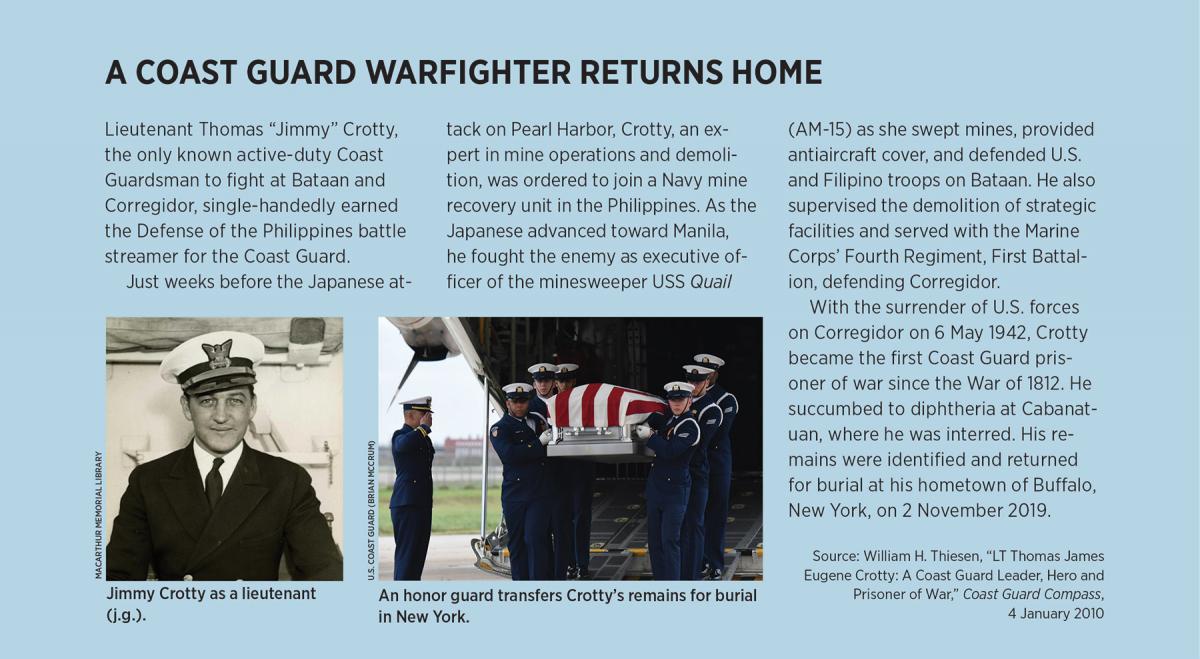 4. Johnson, Guardians of the Sea.

6. Johnson, Guardians of the Sea.

8. Greg Grant, “The Future of the Marine Corps; They’ve Fought This Battle Before,” Defense Tech, 7 June 2016.

14. John A. Tilley, “The Coast Guard & the Greenland Patrol,” www.navcen.uscg.gov/pdf/iip/history/The_Coast_Guard_and_the_Greenland_Patrol.pdf.

Mr. Runion is a former Coast Guard officer and 2006 graduate of the U.S. Coast Guard Academy. He holds a Master of Public Policy from the University of Michigan, where he studied national security policy and foreign policy. He is the author of 25 Awesome Facts about the Coast Guard (2015).