Skip to main content
Operations at sea are ruthless and unforgiving and require decision-making skills and instincts to match the environment and adversary.
U.S. Navy (Cameron Stoner)

Prepare for Decision-Making at Sea

Operations at sea are ruthless, unforgiving, lonely, and test the boundaries of every commander. Whether in charge of a naval force or unit, commanders have absolute responsibility in making instinctive and deliberate decisions. Some decisions may have negative outcomes, illustrating the trials associated with command.

There are many examples from World War II that highlight the challenges of military decision-making. Admiral Arleigh Burke reflected on his war experience and offered the following:

“All men who have been in combat realize this—and know that one of the fundamental requirements for winning battles is to have commanders who know how to use their force, have the initiative to press attack home, have the knowledge to enable them to take proper actions when things go wrong, and who are willing to shoulder the heavy responsibility for leading men into battle. Men who fight with skill, vigor, and a keen sense of duty must have competent commanders who are themselves inspirational. The responsibility to ensure that subordinate commanders do perform with the requisite skill and judgement is one of the most important, and one of the most distasteful, duties of a combat commander.”1

As the U.S. Navy competes throughout the world, commanders will encounter life-and-death situations testing their decision-making competency. Malcolm Gladwell in his book, Blink, suggests “How good people’s decisions are under the fast-moving, high-stress conditions of rapid cognition is a function of training and rules and rehearsal.”2 In handling those stressful situations, commanders can use either instinctive or deliberate decision-making. Instinctive decision-making relies heavily on the individual training, education, and operational experiences gained throughout a professional career.

The U.S. Navy invests an enormous amount of time in the technical training of officers over the course of their careers to hone their professional craft. After receiving a commission and prior to assuming command of a ship, submarine, or aircraft squadron, naval officers receive anywhere from 138 to more than 250 weeks of specialized training. This training continuum, combined with operational experiences, builds the necessary cognitive skills and competency essential to facilitating decision-making while in command.

Gladwell also offers that “decisions made very quickly can be every bit as good as decisions made cautiously and deliberately.”3 Commanders will experience situations when decisions are made without all the necessary information or below the level of conscious cognition. In those situations, competent decisions are typically fueled by the experience of a career and listening to the counsel of subject-matter experts. Any commander must be ready to decide and lead his or her unit in the face of danger—always keeping in mind that no decision is also a decision.

While I was in command, my destroyer was assigned an operation in a high-density merchant shipping area with reduced visibility at night. We identified numerous shipping contacts off the port bow and a few fishing buoys off the starboard bow. My team wanted to alter course to starboard given the merchant shipping traffic, but my instincts told me otherwise. In a previous operation, we experienced a similar situation only to discover that the few fishing buoys we saw at first were ubiquitous and strung out for miles. It is wise to avoid buoy fields because the nets attached to them can get wrapped around the ship’s propellers, reducing maneuverability and speed. I decided to alter course to port, requiring closer attention to the merchant ships but avoiding the fishing buoys altogether. The instinctive judgement to maneuver to port was correct; we later discovered there were countless rows of fishing buoys, which would have been a navigational nightmare and distracted us from our tactical mission.

While instinctive decision-making is a result of experience and extensive training, establishing an organization that supports deliberate decision-making is equally important. Commanders should implement three organizational norms to foster deliberate decision-making within their units. The first is a culture of excellence that empowers individuals regardless of rank to discuss successes and failures with each other. The commander must inculcate in his team a desire to improve and to speak freely about problems and mistakes. In doing so, the commander will receive the information necessary to assess risk accurately and make purposeful decisions. Even high-performing organizations make mistakes; the key is to identify and correct them quickly to avoid potential cascading effects.

The second is the conduct of detailed preparation prior to any operation or mission. It is given that commanders will consume and evaluate as much information as possible. More important, the organization should establish a vehicle to generate rigorous debate among stakeholders to prepare well-thought out options before execution. Most operations or assigned missions will not occur exactly as planned. A rigorous planning approach assists the commander and the organization to think about possible scenarios that may evolve, which in turn facilitates improved decision-making.

The third key norm is understanding the time requirement associated with any decision. Not all decisions are the same in terms of time, which shapes the decision-making process. Recognizing how much time is available allows proper prioritization of the tasks at hand. Some decisions need to be made in seconds, while others may afford the luxury of weeks. Understanding time constraints provides an understanding of the level of information that can be acquired and the degree of assessment that realistically can be completed before a decision must be made.

Commanders assume absolute responsibility for every decision made at sea. In the maritime novel Master and Commander, author Patrick O’Brian narrates a range of episodes where Royal Navy Captain Jack Aubrey is tested in his seamanship and tactical knowledge. In one such situation, Captain Aubrey must decide whether to save his ship from capsizing and lose all personnel aboard or save a single crew member at sea who is attached to a line connected to the ship’s mast. In that case, Aubrey decides to cut the line, leaving the sailor to the perils of the sea but allowing the ship and crew to survive. Instinctively at times and deliberately in others, commanders must make decisions. Their ability to do so is their most important tool in life-or-death situations, including combat. 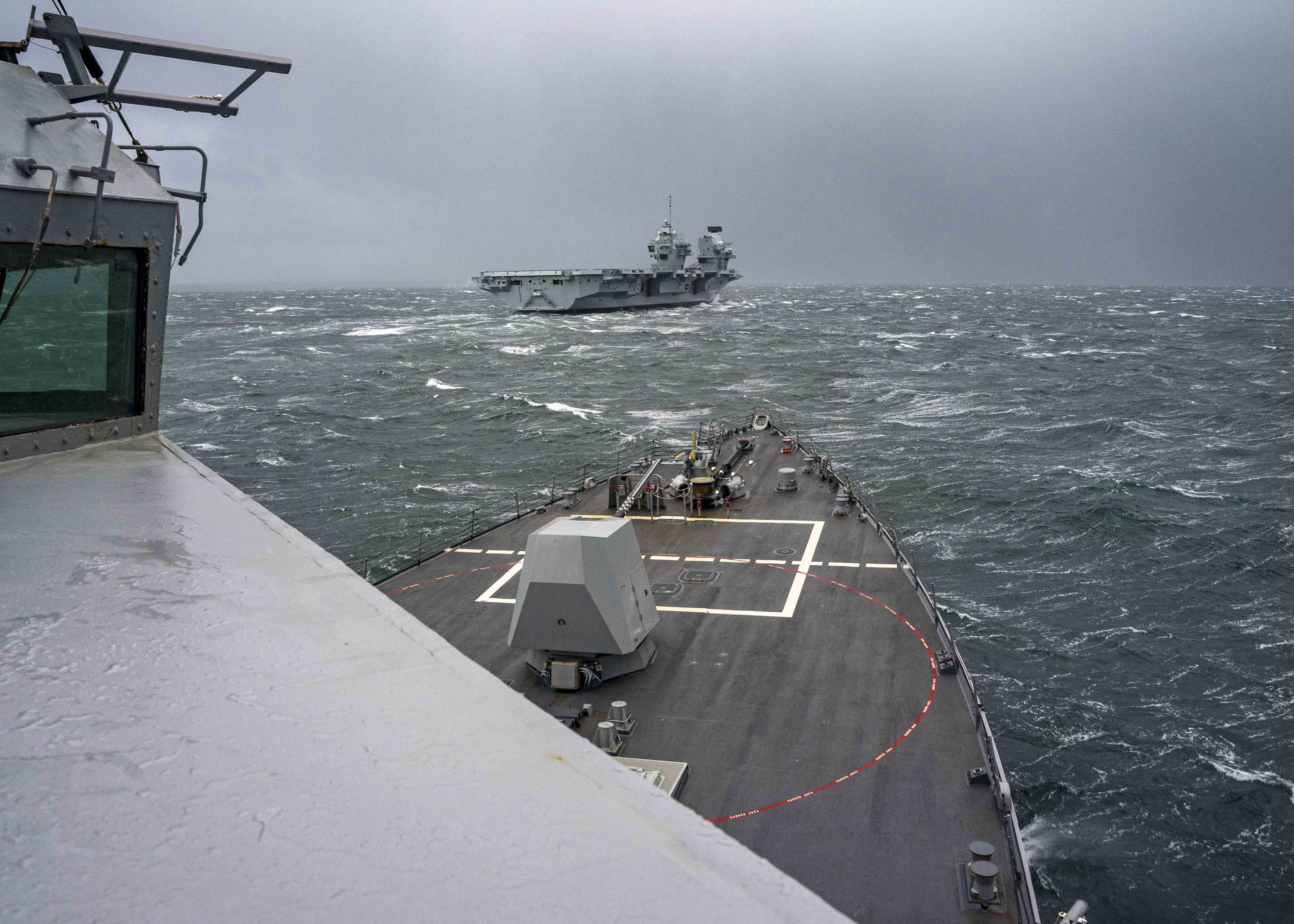 Operations at sea are ruthless and unforgiving and require decision-making skills and instincts to match the environment and adversary.
U.S. Navy (Cameron Stoner)

Commander Benson is a Federal Executive Fellow with the U.S. Naval Institute and the Center for Strategic and International Studies (CSIS). He commanded the USS Stethem (DDG-63), forward deployed in Japan, from 2017 to 2019. His views are his own and do not represent those of the Departments of Defense or the Navy.