Save the Army’s 'Navy' 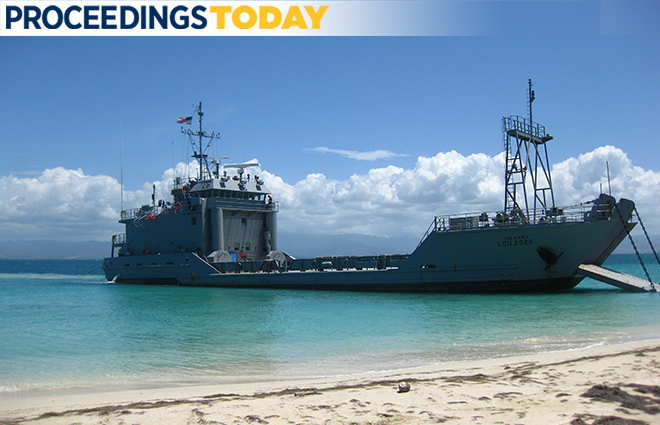 Many Americans—including many people within the Department of Defense—do not know that the U.S. Army has a large “navy.” It is called Army watercraft, and within this field are about 300 vessels and 2000 soldiers with the specific 880 and 881 military occupational skill (MOS). Army vessels range in size from 75-foot small tugs (STs) to 315-foot logistic support vessels (LSVs) in active and reserve service. Army warrant officers and soldiers man these vessels, with an LSV crew consisting of 8 officers and 27 soldiers. Small tugs operate mainly in harbors and roadsteads, LSVs and 128-foot large tugs (LTs) operate worldwide and are designed and equipped to undertake ocean crossings. Annually the Army commits $120 million dollars to maintain its waterborne capability. (Photo caption: USAV Matamoros (LCU-2026) conducting beach operations at Isla Caja de Muertos, Puerto Rico, in 2014. Credit: author.)

The Army watercraft community faces a crisis, though many within the community may be in denial. Its vessels are not well maintained, it cannot staff full crews, it struggles to meet missions, suffers from embarrassing accidents (which are hidden from public view), and it does not provide what could be a valuable tool or resource for many current and future national challenges. During recent humanitarian and military operations Army watercraft have not been used, or severely under used.

A recent example is the response to Hurricane Maria in Puerto Rico last year when roads and the Port of San Juan were not accessible. Army vessels could have easily landed at a myriad of beaches, roadsteads, and smaller ports throughout Puerto Rico, bringing water, food, tents, medical supplies, generators, trucks, and engineers. But Army watercraft were never called. Instead FEMA and military leaders focused on bringing all supplies and services through San Juan. Weeks and months elapsed with little progress, while a dozen U.S. Army LSVs and utility landing craft (LCUs) sat idle in Tampa, Morehead City, and Fort Eustis. LSVs and LCUs are landing craft which can carry more than 5000 and 500 tons of cargo respectively, and are capable of sailing from the continental United States to Puerto Rico in less than a week. I have sailed as the skipper of both an LSV and an LCU on numerous training missions from U.S. mainland ports to Roosevelt Roads and Ponce, Puerto Rico.

In addition, Army watercraft are an integral part of the military’s Joint Logistics Over the Shore (JLOTS) capability. JLOTS is designed to offload materials and supplies over beaches and through unimproved or degraded ports. Army harbormaster units provide command-and-control authority, expeditionary units build piers, and LCUs and LSVs offload supplies and vehicles. Yet last year after Hurricane Maria decimated Puerto Rico and the U.S. Virgin Islands there was no call for military watercraft assistance. As days, weeks, and months passed in Puerto Rico, a JLOTS operation could have been launched, but no request came. The Army’s “navy” could have helped tens of thousands of Americans in distress but it was not asked. 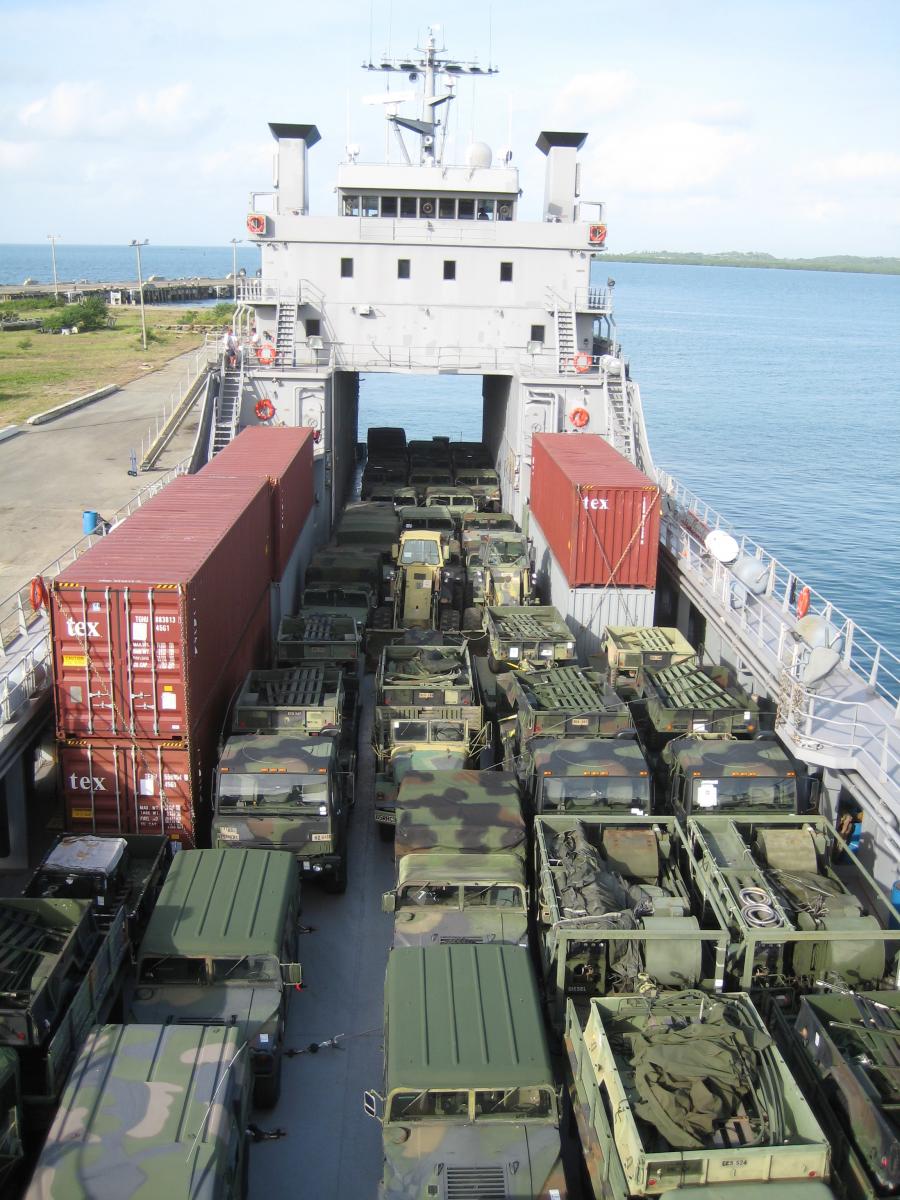 Army watercraft are part of the Army’s Transportation Corps, along with trucks, tanks, and trains. Watercraft are viewed as transportation assets to move supplies to and from theaters of operation. This doctrine is based on outdated concepts, such as “behind the front lines” distribution of supplies and material.

Compare the use of Army watercraft to the use of Army aircraft. Aircraft (rotary and fixed wing) are not considered a transportation asset—they are a self-contained community that provides aviation support to all Army operations. Army watercraft, using the logic of Army aviation, should thus “own” maritime operations, and not be relegated to merely to carrying supplies. There are a plethora of commercial ships that can carry commodities for the Army. What is needed is an Army watercraft command that can react to humanitarian crises, combat operations, and any conceivable maritime need. Army vessels could, and should, be at the tip of the spear, not serving a support role behind a mythical front line and viewed only as waterborne trucks. Army watercraft doctrine clings to a concept of operations in a permissive environment. This is in notable contrast to Army aviation or ground operations where performance is required in all conceivable situations. Army watercraft should be trained for operations in direct action, as well as support situations, providing vessels to serve as command-and-control platforms and support platforms for Special Operations.

Army watercraft have been deployed to the Middle East (specifically Kuwait) since Operation Desert Storm, but often these vessels stayed moored for months at a time. Officers and crew are detailed to other duties, and commanders are reluctant to use the vessels, as they do not understand their capabilities and therefore do not integrate them into broader missions. Inside the United States, Army watercraft are never the first on scene for disaster relief. It is always Coast Guard and Navy ships and Marine Corp units, but Army watercraft should also be considered for these missions and train for them.

The Army’s “fleet” is not well maintained because the Army’s maritime shore side support system, called Area Maintenance Support Activities (AMSA), was designed by the Army’s Tank and Automotive Command (TACOM), and is structured to maintain ground systems, such as tanks and trucks. Maintaining watercraft is far different than maintaining tanks and trucks.

From personnel hiring and training, to chain of command, and maintenance, maritime AMSAs struggle at every level to maintain their vessels. A recent independent examination of one AMSA uncovered a multitude of issues, challenges, and institutional problems including poor leadership and management, dysfunctional chain of command, lack of proper training, ineffective purchasing and parts ordering processes, work orders not completed causing vessels to be dead-lined (non-mission capable), and overreliance on outside contractors to effect repairs and maintenance.1

Army watercraft are dispersed throughout the world, from Japan to Kuwait, with many vessels in wet storage (ready reserve status). Vessels intended for immediate use are divided between active duty and reserve units, and located in various ports, including Pearl Harbor, Tacoma, Port Hueneme, Tampa, Morehead City, Fort Eustis, Fort Belvoir, and Baltimore, Maryland.

However, the Army cannot maintain qualified crews for these vessels, so nearly every potential mission requires a scramble to cobble together a qualified crew. Even when a crew is assembled their vessel is often not fully mission capable. On paper, Army watercraft appear to be a robust and fully capable resource, but they have been struggling for years to access, train, and retain qualified soldiers and keep their vessels ready.

Army watercraft must be more responsive and relevant to today’s global environment. They must be more than just another transportation asset, and used for both strategic and tactical missions. Yes, Army vessels can carry commodities, but they can also provide waterborne security, serve as water and fuel points, serve as medical aid stations, communication hubs, mobile command posts, berthing and food service centers, and support for Special Operations.

To affect needed change, Army watercraft should be removed from the Army’s Transportation Corps and formed into its own command—an Army Maritime Command. This command’s purpose should be ensuring Army watercraft are ready and capable of supporting all U.S. strategic and tactical maritime operations. If created, the Army Maritime Command could support FEMA, Navy, Marine Corp, Coast Guard, or any other U.S. Government agency.

An Army Maritime Command would oversee all vessel maintenance, crew recruitment and training, mission planning, and execution. Maritime operations would be led by a general officer. Just as U.S. Navy Riverine Squadrons, Special Warfare Combatant Craft (SWCC), and SEALs are not part of the Navy’s surface fleet, the Army’s “navy” should no longer be a misunderstood and underutilized subset of its land-oriented Transportation Corps.

A cultural and paradigm shift is required within the Army’s watercraft community if it is to remain relevant and capable. Over the past several decades, minor adjustments have been made to fix some of the ills within the Army watercraft field, but major problems remain. Now is the time to make significant changes and move the Army’s watercraft into their own Army Maritime Command to maximize the potential of these important and capable assets.

Chief Warrant Officer Carr is a 1977 graduate of the U.S. Coast Guard Academy. He served 10 years as a Coast Guard officer before transferring into the Army watercraft community where he served 15 years as a Marine Warrant Officer, retiring in 2015. He holds a bachelor’s degree in government and a masters in military affairs. He is a graduate of the U.S. Navy Diving and Salvage Training Center and the U.S. Navy Riverine Warfare School. Chief Carr now lives in Florida where he dives and operates Haze Gray Maritime LLC.

1. Survey conducted by Vector/CSP (Contract # GS-00F-066CA, to which the author was a contracted employee).