Although they appear to have disappeared from carrier strike group operations, submarines still are vitally connected to defense of the fleet—but only when and as needed.

A common and persistent belief in many parts of the U.S. Navy is that the submarine force has virtually no active connection to the remainder of the fleet. Emblematic of this disconnectedness is the notably changed relationship of submarines to carrier strike groups (CSGs). Since at least 2004, CSGs largely have omitted any reference to submarines in their organizational charts. Even before then, while attack submarines technically were attached to deploying CSGs, the reality (in the Pacific at least) was that following the strike group’s composite training unit exercise, a common deployment date, and an undersea warfare exercise, the submarine immediately parted company with the strike group, never to be seen again.

The reasons submarines appear to have disappeared from the fleet—and CSG operations in specific—are several. Obviously, ballistic-missile submarines were never there in the first place, and sensibly so, as their sole purpose is to provide a virtually invulnerable, second-strike capability to the nation’s nuclear triad. They always were “somewhere else.”

In the case of the attack submarines (SSNs), however, the explanation is more complex. First, today’s attack submarine mission sets primarily are related to intelligence, surveillance, and reconnaissance (ISR), which takes them far from typical strike group activities. Second, these boats have a major obligation regarding both safeguarding ballistic-missile submarines and defending the United States against the threat posed by adversary ballistic-missile submarines. Simply put, in the calculus of demand for tasking versus number of attack boats available (66 in 2016 compared with 101 in 1986), to assign boats to close CSG escort duties is viewed as suboptimal. So SSNs no longer consort with CSGs. There simply are not enough of them.

Yet, the detachment of submarines from deployed CSGs is more than an unfortunate numbers-driven game. It also is a reflection of the evolution away from CSG-centrism, which dominated Navy thinking post–World War II, and toward fleet-centric (vice platform-centric) thinking. A reflection of this shift can be seen in the growing awareness that the days of the CSG being the Navy’s gold-standard unit of measure may be coming to a close.

In fact, the Chief of Naval Operations’ “Design for Maintaining Maritime Superiority” specifies that the Navy increasingly must operate in an arena in which three major considerations predominate: globalized ocean traffic, globalized information systems, and a high rate of technical creativity and adoption. The strategy demands that all three of these factors be integrated into the Navy’s fleet operations, and that means thinking beyond the tactical level of the CSG and toward the operational/fleet level of warfare. Today, submarines, cruisers, destroyers, P-8s, and aircraft carriers and their air wings are viewed as tools to be used at the operational level, and disaggregation of the CSG may be increasingly routine.

Specifically, this change is being achieved operationally by the rise of the maritime operations center (MOC) at the fleet level. The MOC examines maritime activities with an emphasis on the implementation of “effects” across the entire battlespace. In this view, the CSG and its component parts are simply tools in the larger effort to attain these desired effects. So, while the carrier and its attached air wing may be the most potent tools available, the days of discrete and insoluble CSGs no longer are a given.

This change can be observed in the increasingly common and necessary disaggregation of the strike group, once in theater. Whether this disaggregation is the result of a paucity of assets; the rise of distributed lethality or distributed maritime operations; or the requirements of ballistic-missile defense and what that means for cruisers and destroyers in terms of geographic placement, it seems true that fleet operations in support of operation plan (OPlan) execution will be decentralized at the tactical level. At the operational level—the level between strategic and tactical—however, synergy and integration are essential. In the fleet, the picture has gotten bigger. No longer is it “What is the CSG in the South China Sea doing?” Today, it is “What is the state of play in our undersea warfare . . . or cyber . . . or logistics campaign?” 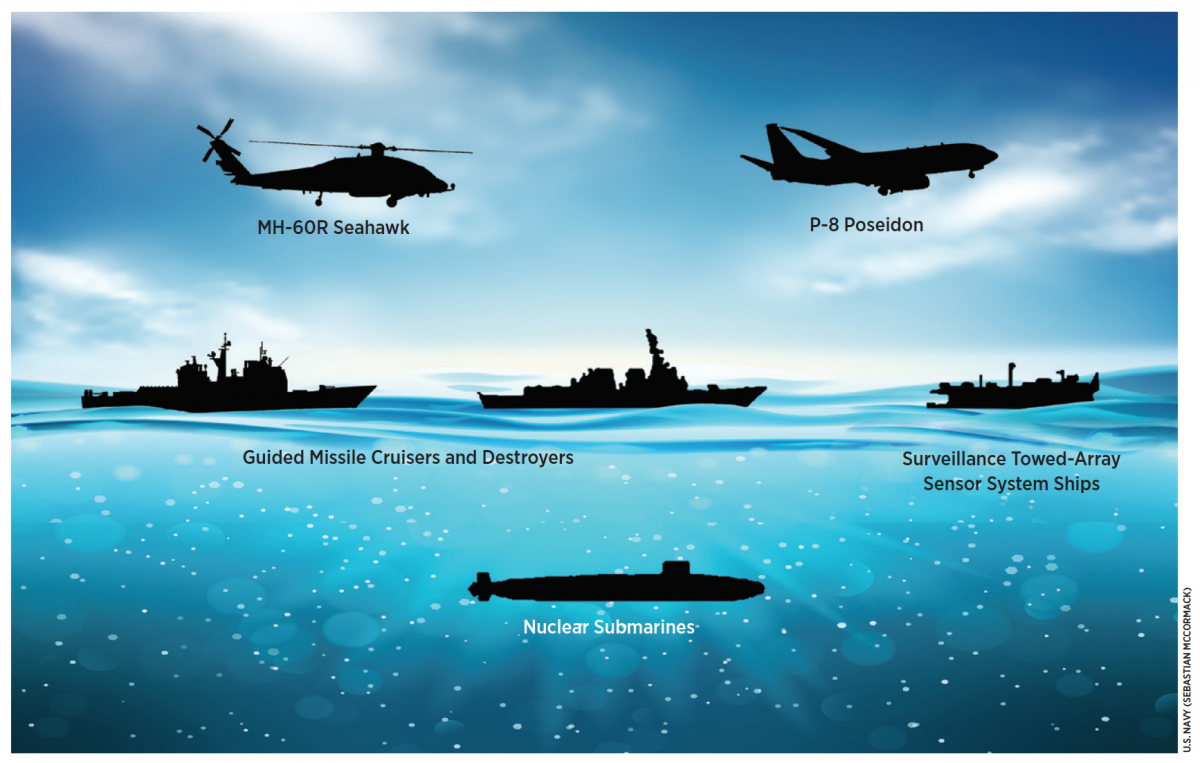 With regard to these various campaigns taking place at the operational level, the term “network” or “grids” has come into play. As envisioned, this is the system through which intelligence and sensor/targeting information flows, is synthesized, and then is used by all platforms to execute the desired effects quickly and deliberately. The submarine force has a major role to play in this structure because speed and stealth are required in the time-sensitive targeting that demands not only the attrition of enemy forces but also—and just as important—the attrition rate of critical enemy combatants. Consider: Every day a key enemy asset remains on the field is another day in which it may threaten campaign success. So, in modern thought, not only is killing the enemy a concern, but killing them quickly is of paramount importance.1

In the case of attack submarines, they increasingly respond to the theater antisubmarine warfare commander (TASWC), who is responsible for weaving together submarines, P-3/P-8 aircraft, ocean surveillance ships, and other sensors/effectors into the networked grid to achieve the effects mandated by the MOC and support different campaigns subordinate to the overall OPlan execution. The TASWC is based conceptually in what is called full-spectrum antisubmarine or undersea warfare—a process that coordinates component and joint capabilities to achieve the desired effects within and from the undersea domain to support the “Design for Maintaining Maritime Superiority.”

The TASWC will use any and all available undersea forces to be either the supported or the supporting commander in all warfare areas and campaigns. With regard to the SSN connection to the CSG, while the CSG may not be aware of the submarine’s involvement in strike group defense, the TASWC is responsible for moving submarines and other ASW assets at his disposal in defense of the carrier (or any other high-value unit) as needed. In short, through the MOC/TASWC, submarines still are closely and vitally connected to the immediate defense of the fleet—but only when and as needed.

The problem of numbers still attends any discussion of a shift from peacetime to wartime, so it is sensible to ask whether the ISR, ballistic-missile submarine protection, and hunter/killer missions will somehow be shed in the event of war in favor of a broader and more aggressive tasking. As it turns out, the answer is yes . . . and no.

Prior to the outbreak of World War II, one of the primary concerns of those who were formulating War Plan Orange—the strategy for a war against Japan—was the problem of getting the fleet from the Atlantic and into the Pacific. In recent years, this question likewise has occupied the submarine force, which would find itself shorthanded in the event of peer-to-peer warfare. Part of the solution has been determined to be a large-scale “flush” of much of the submarine force to the Pacific. So, while this movement is occurring, some missions may have to be sacrificed, pending the arrival of reinforcements, after which sufficient assets will exist.

The planning for this large-scale movement is evolving even now, and fleet exercises have been instituted to develop the details: Which boats should be sent? When? Via what path? What are the second-, third-, and fourth-level implications on both sides of the world? How will they be seamlessly “chopped” into ongoing operations? At what level of warfare proficiency are they certified and will that dictate the assigned missions? How will they be replenished and when?

In addition, even now, the submarine force is carefully retooling the way it does business to meet a changing perception of the challenges that might be faced during conflict. Most notably, efforts are being undertaken to move the attack boat force away from operations that are closely scripted and meticulously controlled and toward the more independent, unrestricted operations commonly understood to have originated in World War II. In the next war, should it come, submarine captains will be charged to range farther and more independently, using their own judgment to aggressively prosecute the war, by any means necessary. This independence will have to be tied to the integrated fleet battle plan, so that the target sets are well known and prioritized to achieve the desired end states.

While it will be a struggle to implement this independence of action, fleet-wide, following decades of increased micromanagement, it is a must-do. In any major war scenario, the easy, worldwide use of satellite communications likely will be lost, along with Global Positioning System navigation. Ships of all sorts will be expected to operate, if not independently, then with little more than a top-level list of desired theater “effects.”2

In the next war—and in diametric opposition to the growing interconnectedness of fleet units and the chain-of-command, top-to-bottom—it will be incumbent on unit-level commanders to act independently and aggressively in effecting their understood missions. Thus, in the Pacific at least, there is increased emphasis on clear, succinct, top-level guidance, so forces know what to do when and if interconnectedness is lost. The submarine force has foreseen this and already is pivoting in this direction.

In support of that pivot and to pace its adversaries’ threat vector, the submarine force increasingly is experimenting with new technologies, including a universe of unmanned vehicles, both undersea (UUVs) and aerial (UAVs). The force just stood up its new UUV squadron in Bangor, Washington, to begin developing and fleshing out UUV operational and tactical concepts. In addition, there is a growing lean toward technologies that make attack boats more interactive, including sophisticated systems that allow, not only coordination with the TASWC, but also real-time communication with other forces in support of targeting and battle damage assessment.

These new envisioned systems are necessitated by the realization that in modern warfare, unmanned and intelligent systems offer capacity and capabilities that manned systems cannot. They can provide a greater view of the battlespace farther forward and with less risk. Ultimately, this means longer arms for kinetic reach and an ability to be connected to the netted grid even in satellite-jammed environments.

The submarine force may be silent, but in a fight, it is and will be an invaluable asset. At the outset of a conflict, owing to their stealth, submarines can roam at will and carry the initial salvo to the enemy, clearing the maritime battlespace to the requisite level of risk. And once the war is fully joined, they will be everywhere—and nowhere—bringing the fight to the enemy’s front door: fully integrated and indispensable.

Captain Corpus is the deputy for training and assessments at the Undersea Warfare Development Center. His active-duty assignments included chief of staff, Naval Mine and ASW Command; chief of staff, Carrier Strike Group Five; and commander, Submarine Squadron 15. He holds a bachelor of science in marine engineering from the U.S. Naval Academy and a master’s in systems analysis from the Naval Postgraduate School.