Nobody Asked Me, But . . . Rename the Coast Guard Districts

The construct today dates to World War II, when Coast Guard district commands were made to parallel naval districts. The naval districts were named numerically, starting with the First District in the U.S. Northeast and going west, ending with the Seventeenth Naval District covering Alaska. The numbers themselves were meaningless, but for the Coast Guard, following the Navy’s naming convention increased interoperability. This made sense for the times as the Coast Guard was part of the Navy Department for the duration of the war.

All the naval districts except Naval District Washington were disestablished by 1980. It no longer makes sense for the Coast Guard to maintain a naval naming convention. The names of Coast Guard district commands should have some intrinsic meaning.

Geographically based naming conventions are not new to the Coast Guard. In fact, most other shore units—areas, sectors, boat stations, bases, etc.—are named after their geographical areas of responsibility. Even maritime safety and security teams (MSSTs) and strike teams, which deploy nationwide, are named geographically. MSSTs initially used a numerical naming convention, but the city of each unit’s home port was added later to reduce confusion. Now the MSSTs are known primarily by their home ports. Changing the districts’ names would bring them in line with the rest of the service.

Adopting geographical names for district commands would make it easier for others to understand the Coast Guard’s organization. As an illustration, consider unit names from some Coast Guard partner agencies. Federal Emergency Management Agency (FEMA) regions are identified by Roman numerals. Someone not intimately familiar with FEMA would not necessarily know which FEMA region covers St. Louis (Region VII). Conversely, most anyone could guess that St. Louis falls within the Army Corps of Engineers’ Mississippi Valley Division and that Los Angeles, for example, does not.

On a global scale, the Department of Defense (DoD) has adopted a geographical naming convention for combatant commands that cover a specific region. So U.S. European Command covers Europe. In fact, since World War II, DoD has continually revised the Unified Command Plan to meet emerging security needs. U.S. Southern Command, for example, was the Caribbean Command until 1963. The name was changed to better reflect the actual area of operations. Two notable recent additions are U.S. Northern Command in 2002 and U.S. Africa Command in 2008, both with geographical names. While DoD has modernized the names of its regional commands, the Coast Guard clings to a convention that has been obsolete for 40 years.

The map below shows possible new names for the Coast Guard districts. 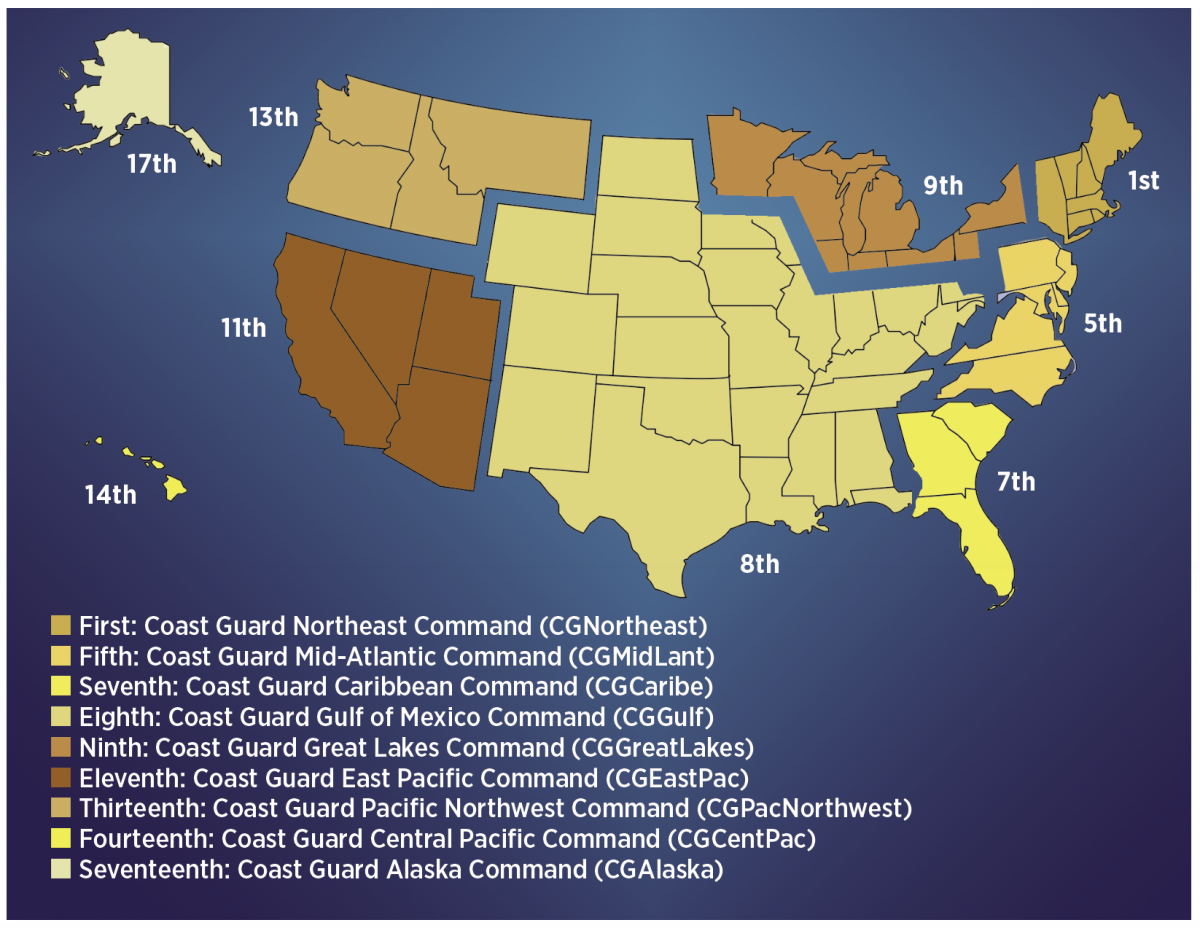 While the naval districts existed, making Coast Guard commands match increased interoperability with the Navy, but this no longer is the case. Basing district names on geography will align the districts with the rest of the Coast Guard and more closely match how DoD names its regional commands. People will care more about a place than a number; using names will increase Coast Guard visibility by making the service more understandable to external entities at all levels.

Commander Hotchkiss serves in a detached-duty billet in the National Military Command Center in the Pentagon. Previously, he served as commanding officer, Port Security Unit (PSU) 313 Everett, WA, and as executive officer of PSU 308, Kiln, MS. As a civilian, he has been an instructor with the National Geospatial Intelligence Agency since 2007.