Deal With the Next Threat 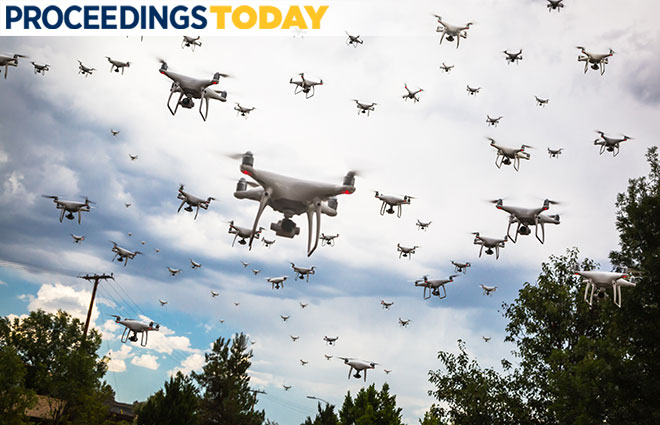 Today’s military strength can be characterized by the ability to project and demonstrate power across great distances. In the past, this was accomplished by physically moving people to fight on a battlefront. However, from manned and unmanned aviation to long-range cruise and intercontinental ballistic missiles, technologies have made power projection from afar a new way to wage war.

The U.S. military is one of the most technologically advanced militaries in the world. This carries obvious advantages, but also some disadvantages. Creating cutting-edge technologies is slow, expensive, and has to adhere to the testing and acquisitions processes. Also, once deployed, U.S. service members operate these systems within specific safety margins and adhere to all regulations. Modern enemies are not bound by laws or morality when it comes to carrying out their mission, and they can take advantage of U.S. practices, procedures, and rules of engagement using technologies already being produced and tested for the commercial market.

The capability of drone hardware is only getting better. Imagine a laptop with a transmitter similar to a basic remote control—except it can control four drones at a time, receive live video from each drone, and coordinate the movement of the drones using the GPS location of each device. Now, make the transmitter receiver on each of the drones a cellphone—something that can send and receive a small data stream over the internet. Finally, make the controller a computer that controls these drones over the internet and can handle the inputs of 50+ drones with object recognition software that can alert a user when any of the drones sees a contact of interest, like a naval vessel or a rotary wing aircraft. The elegance in a technology like this is that there is no advanced computing done on the drone itself, so the flying equipment is cheap and expendable.

The market for technology is increasing for commercial purposes, which will drive down the cost of acquisition by any party, malicious or not. As early as 2012, Vijay Kumar from the University of Pennsylvania did a presentation with the TED organization explaining advances in autonomous robotic flight and even their problem solving abilities in order to meet an objective.1 In 2015, at another TED talk, Vijay Kumar explains advances in decentralized behavior where multiple drones work together to perform a task.2 More familiar though is Amazon’s drone program in which they explain in a comedic video that they have drones that see and avoid technology and are able to fly 15 miles and deliver a payload.3 This technology will continue to advance, paid for by consumerism. As the technologies continue to be produced on a larger scale, and are copied by other companies, market competitiveness will force the cost to consumers to plummet, making them accessible to anyone.

This tech is the combination of a few well-developed technologies designed to counter U.S. military missions. When it comes to large-scale drone or unmanned aerial systems use, it would be difficult for any organization or government to hold a candle to the scale of operations being executed by the United States. However, the scope of U.S. missions is global and was designed to operate anywhere in the world. This is prohibitively expensive for most other parties, but if they only are concerned with drone coverage of a certain harbor, small island group, or a base of operations, it is attainable by organizations even less capable than the unstable governments of developing nations. This is where their advantage is revealed. If a small organization can organically create a network of drones that provide intelligence on U.S. military presence and operations, then the U.S. has lost the surveillance advantage and paid ten thousand time more to do it.

There are several doomsday scenarios that one could imagine with black skies filled with enemy drones, but here are a few that could have large impacts with at a low-cost to the enemy and are possible in current and future operating environments.

In any of these scenarios, the operators of the enemy drones likely will be able to take actions anonymously. If approached by a drone, a U.S. vessel likely will not know if it has hostile intentions, which has large implications when it comes to rules of engagement. This can be solved by allowing warfighters to strike earlier rather than later, but if they strike something that they should not, or they shoot at a drone in an area where they should not, there likely will be political ramifications. The drone operator, however, can force the United States into these situations with no fear of retribution, because they cannot be identified.

Anytime a technology is developed, there is a counter technology not far behind; drones are no exception. Several companies have developed or are developing jamming devices and other equipment. However, the road from development to acquisition and deployment is long and complicated for the U.S. military. There also are laser technologies being developed that could take down a drone, and something as basic as shooting them with bullets from ships or crew-served weapons could work to mitigate this threat. However, expending ordnance or using lasers come with regulations, and the commanders in charge of these weapons have to accept risk of unintended retribution from other nations when using these types of equipment and weaponry. These are the types of regulations adversaries can use to their advantage.

As these threats materialize the U.S. military must adapt with technology and tactics. However the enemy’s ability to see our positions and movements before we would like them known may never be undone.

Lieutenant Agte is the assistant air operations officer on board the USS George H.W. Bush (CVN-77). He is a MH-60S helicoptor pilot.