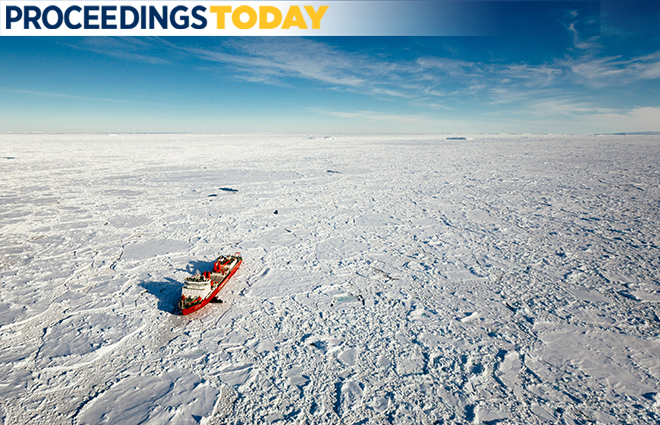 As the ice in the High North diminishes, Arctic and non-Arctic states are seeking to explore the vast potential of the region. Congruent with its aspirations of great power status and achieving economic security, China—which calls itself a “near-Arctic’ state—has furthered its Arctic interests by conducting extensive scientific research and investment in the region. Chinese interest in the Arctic has been rising for years, and the January release of a white paper entitled “China’s Arctic Policy” offers insights into Beijing’s Arctic ambitions.

The document articulates Chinese interests in the region and outlines its policy goals and positions on both the Arctic and participation in Arctic affairs. This white paper is a notable step, as it provides a clear guiding vision for China’s involvement in the High North. Although the document repeatedly notes China’s commitment to international law and respect for other nations, it asserts that China will use Arctic resources to “pursue its own interests,” to include a “Polar Silk Road.” This policy was explained at the recent High North Dialogue, offering additional insights into China’s intent in the Arctic.

The Arctic may hold tremendous economic potential for resources and trade, with the 2008 U.S. Geologic Survey estimating the region has more than 90 billion barrels of oil, 1,700 trillion cubic feet of natural gas, and 44 billion barrels of liquid natural gas. This amounts to approximately one-third of the world’s natural gas supply and 13 percent of global oil reserves. In addition, there are significant mineral resources in the region, to include bauxite, phosphate, iron, zinc, nickel, and copper. Though exploration and extraction remain constrained by the difficulty and expense of development in the region, recent years have seen China seek a greater presence in the Arctic. The Polar Research Institute of China established the Yellow River Station in the Norwegian archipelago of Svalbard in 2003 and continues to conduct research throughout the Arctic.

In 2010, Rear Admiral Yin Zhuo noted that “the Arctic belongs to all the people around the world, as no nation has sovereignty over it. . . . China must play an indispensable role in Arctic exploration as we have one-fifth of the world's population.” China was granted observer status in the Arctic Council, the preeminent intergovernmental forum on the Arctic, in 2013, the same year it founded the China-Nordic Arctic Research Center. In 2014, Chinese scholar Elizabeth Economy noted that Beijing has “has begun the process of engaging in the Arctic through research, investment, and diplomacy.” 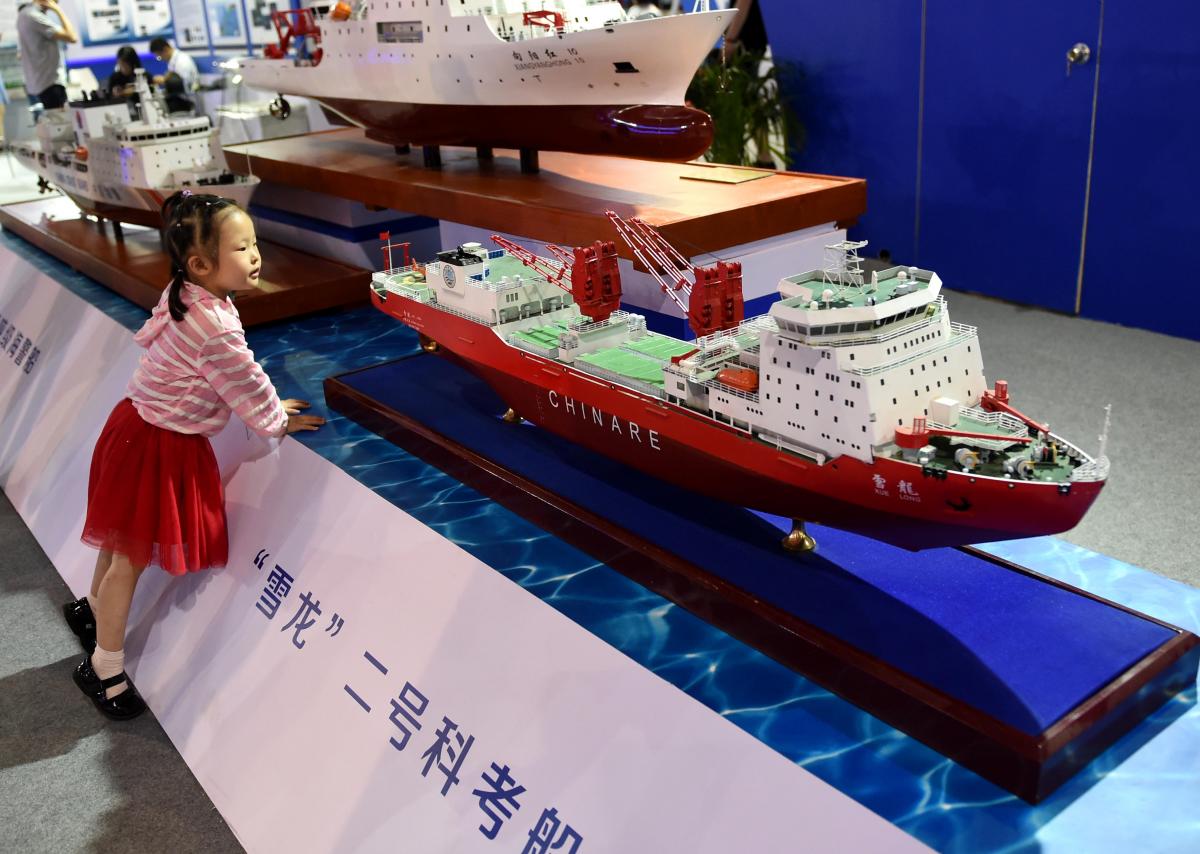 A model of China's second polar research icebreaker, the Xue Long 2, which is being fitted out now.

While the difficult weather and ice conditions of the region preclude large-scale maritime activity in the near future, it is clear that China is looking north for alternative trade routes. In 2013 China Ocean Shipping Company (COSCO) sent a cargo vessel along the Northern Sea Route; it sent an additional five ships in 2016 and eight the following year. Though a small fraction of overall global trade (nearly 17,600 vessels transited the Suez Canal in 2017, as compared with 24 transiting the Northern Sea Route), it indicates China’s willingness to explore alternative routes. Indeed, this March saw COSCO and Russia’s Novatek release a statement where officials agreed to “expand the mutual cooperation in scope and depth, especially to expand the dialogue on Arctic transportation collaboration.”

The new white paper details China’s interests in the region as “an important stakeholder in Arctic affairs,” and identifies specific policy goals and positions. It is divided into four main parts: “The Arctic Situation and Recent Changes,” “China and the Arctic,” “China’s Policy Goals and Basic Principles on the Arctic,” and “China’s Policies and Positions on Participating in Arctic Affairs.”

It first highlights the impact of global warming on the region and explores the potential impact of accelerated ice melt, addressing the region’s abundant natural resources. The paper asserts that while non-Arctic states lack territorial sovereignty in the Arctic, they have rights that include scientific research, laying of submarine cables, and resource exploration and exploitation (to include mining and fishing).

Importantly, the white paper reiterates Rear Admiral Zhou’s 2010 sentiment by noting that the “Arctic situation now goes beyond its original inter-Arctic States or regional nature, having a vital bearing on the interests of States outside the region and the interests of the international community as a whole, as well as on the survival, the development, and the shared future for mankind.”

In opening the second part, “China and the Arctic,” the paper proclaims China to be an important stakeholder in Arctic affairs. China’s key areas of interest in the region are declared to be climate change, the environment, scientific research, use of shipping routes, resource exploration and exploitation, security, and global governance. This section carefully traces Chinese historical involvement in the region, beginning with the 1925 Spitsbergen Treaty and extending through its current scientific and economic pursuits in the region. It identifies the opportunities of a “Polar Silk Road” in facilitating connectivity and economic development.

The white paper next establishes Chinese policy goals as “understand, protect, develop and participate in the governance of the Arctic.” It further explains each as:

· Understand the Arctic by improving capacity and capability in scientific research

· Develop the Arctic by improving Chinese capacity and capability, to include the development of Arctic shipping routes

· Participate in the governance of the Arctic by commitment to the existing framework of international law, including the U.N. Charter, the U.N. Convention on the Law of the Sea (UNCLOS), the International Maritime Organization (IMO), and climate change and environment treaties

While the paper notes that these goals will be accomplished by working with other countries, it affirms that China will pursue its own interests and address security threats through global, regional, multilateral, and bilateral mechanisms.

To achieve the stated policy goals, the paper declares that China will participate in Arctic affairs according to the principles of: “respect, cooperation, win-win result and sustainability."

· Cooperation applies to all stakeholders, intergovernmental organizations, and non-state entities, with the paper noting that cooperation is necessary on the environment, scientific research, shipping route development, resource utilization, and cultural activities

· Win-win result is noted as the pursuit of mutual benefit and common progress.

· Sustainability is highlighted as the fundamental goal of China’s Arctic involvement, such that promoting sustainable development in the Arctic will be critical

Why the International Community Should Care

While the white paper addresses China’s desire to cooperate and act in accordance with established international law and international treaties, it is important that strategic interests are woven subtly throughout the document. The paper clearly expresses Chinese intent to pursue a Polar Silk Road for maritime shipping traffic. Indeed, this harkens to the 2016 observation by the COSCO Executive Vice President Ding Nong, who noted that "as the climate becomes warmer and polar ice melts faster, the Northeast Passage has appeared as a new trunk route connecting Asia and Europe.” The white paper emphasizes the Polar Silk Road and the need for new icebreakers.

The United States and the rest of the international community should welcome China’s stated commitment to “respect, cooperation, win-win result and sustainability.” Indeed, the white paper uses the words cooperation 45 times and respect 23 times, though it remains to be seen if China will uphold this commitment. Indeed, at the 2018 High North Dialogue panel on “China’s Future Role in the Arctic,” Liu Jun, professor and dean at the School of Advanced International and Area Studies of East China Normal University, displayed a slide that highlighted the number of times specific words were included in the document—to include cooperation and respect. Clearly the Chinese wanted the audience to be aware of this point.

The white paper cements China’s belief in its “stakeholder” role in the Arctic; interests are cited 18 times although security is use only 10 times. China has invested significantly in the region, and the white paper indicates the trend will continue. Crimea-related economic sanctions likely have increased the cooperation between China and Russia in the Arctic. Notably, the state-owned PetroChina has a 20 percent stake in Russia’s Yamal LNG project; indeed, the first LNG shipment from Yamal in December went to China. The white paper makes it clear that these activities and investments will continue as China seeks a greater role in the Arctic.

China's white paper also points out that current U.S. Arctic policy lacks robustness and must be strengthened to ensure future U.S. strategic interests are achievable. The white paper mentions the UNCLOS ten times—a treaty that the United States has not ratified but one that China and 167 other states have. China has expressed throughout the white paper that it will abide by UNCLOS. Without ratifying UNCLOS, the United States has no legal authority with which to pursue claims and ensure consistent application of international law, potentially diminishing U.S. standing and disadvantaging economic interests.

Overall, the codified Chinese Arctic strategy serves to highlight the shortfalls in U.S. Arctic policy and the need for U.S. policymakers to reexamine the Arctic to ensure protection of strategic interests. The issuance of this white paper by Beijing clearly signifies China’s intent to play a significant role in the Arctic’s future—the United States should be prepared to do the same.

Commander Gosnell is pursuing doctoral studies in international security and economic policy at the University of Maryland, with a focus on maritime security in the Arctic. She holds a Master of International Security Studies from Georgetown University, a Master of Engineering Management from Old Dominion University, and a Bachelor of Science in Political Science from the U.S. Naval Academy. A qualified surface warfare officer, she currently teaches political science at the U.S. Naval Academy.