Blockchain Can Protect the Supply Chain 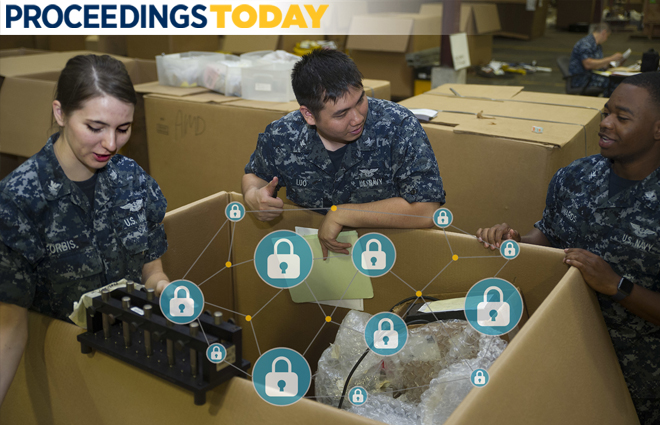 When the government of Britain presented the administration of U.S. President Woodrow Wilson with what became known as “the Zimmerman Telegram” in 1917, it created a quandary for the U.S. government. The message appeared to be a proposal from Germany to Mexico to form an alliance against the United States, with Germany offering Texas, New Mexico, and Arizona to Mexico in the event of a victorious outcome. But was it genuine?

Public opinion in the United States at the time was staunchly isolationist. Wilson—who had been reelected in 1916 under the slogan “He kept us out of war!”—was one of the most antiwar presidents in U.S. history. David Milne wrote in his seminal book Worldmaking that after the United States received the telegram:

It took a while for American intelligence analysts and members of the Wilson administration to accept that the intercept was genuine and not just British propaganda (a dark art at which London was adept). Convincing Wilson of the cable’s provenance was further complicated by the British requirement that it would not reveal the full extent of its highly sophisticated intelligence-gathering operations, which mopped up American as well as German telegraphic traffic.1

Only after the provenance was proven beyond doubt was the President willing to go to Congress and seek a declaration of war. While a small detail in a great narrative, Wilson’s pursuit of verification was a wise move and illustrates a potential threat against the United States in the future.

In November 2017, the Wall Street Journal published an article on the prevalence of surveillance cameras manufactured by the Chinese company Hangzhou Hikvision Digital Technology, of which 42 percent is owned by the Chinese Government. The Journal pointed out that Hikvision cameras were used by the Memphis police department, the U.S. Army, and at one point were installed at the U.S. Embassy in Kabul. Two months later, it was reported that the Army was removing its cameras. According to the Journal, Army Colonel Christopher Beck affirmed that the service did not believe the devices posed a security risk but that they were removed to avoid “any negative perception.” It is easy to imagine that cameras designed and built by a partially state-owned Chinese company could have been designed with hidden backdoor access points. While there is no evidence such was the case, it indicates that perhaps the United States should pay more attention to the provenance of the components used in devices protecting national security.

As Bitcoin has entered popular awareness, blockchain—the technology behind it that makes it possible—is slowly following suit. Blockchain is nothing more than a public ledger, but because of its structure it is almost completely tamper-proof, which makes it an ideal candidate for guaranteeing national defense supply chain provenance.

The question of supply chain trust received attention last fall when Kobe Steel revealed it had lied about the quality of the steel it was manufacturing. As the New York Times reported, the Japanese Company confessed that it had manipulated test data on components bound for “cars, trains, and aircraft.” It is not hard to imagine how much carnage could result from even small structural failures due to weak components in major transportation devices. Consider the implications if such problems occurred in F-35 aircraft—or the USS Gerald R. Ford (CVN-78).

Blockchain technology originated in a white paper released by “Satoshi Nakamoto,” a pseudonym for a still unknown person or group of people. In creating blockchain, Nakamoto developed the only way to store real value on the internet: by building a shared ledger that is practically impossible to alter surreptitiously. (Though Nakamoto used blockchain to support the popular cryptocurrency bitcoin, it is important to note that blockchain and Bitcoin are two separate things.)

Blockchain technology was created using a variety of preexisting software tools to do something new. When an entire network has access and has agreed on the contents of the blockchain ledger, if any one part is changed, the rest of the network will see it and will know it has been violated. The ledger can be stored across a network or on a single server. Each computer in the network provides a service to the blockchain: it helps with storing the data, and its central processing unit (CPU) performs the computations necessary to create new entries to the ledger. Each computer is commonly referred to as a node in the network.

Blockchain would not be possible without the hash function. A secure hashing algorithm (SHA) takes any digital input—any string of characters—and outputs a hexadecimal (a base-16 number) value. One of the strongest hash functions available is SHA-256, that provides a 32-character hexadecimal value for a unique input of any size. Hashing is a one-way street; it is believed to be impossible to reverse engineer the function to discover the original input. For instance, to store a phone number, one would simply enter the number into the hash function, and it would spit out a 32-character output of random looking numbers and letters. It is not random encryptions; every time you enter the phone number, it will come out the other side exactly the same. However, if you were to change a single digit in the phone number, the 32-character output would look completely different.

Once the first block is created, the hash of the header is sent out to every node. Each node agrees on the hash, the timestamp, and the hash of the contents. To build another block, the header on the second block takes the hash of the contents from the first block, and that becomes the header hash for block number two. The timestamp is added, and the hash for whatever new data is stored is created. This process is run over and over again each time a new block is added. Each node is watching and recording this process, so all the parties agree on the history of the chain. If a malicious actor wanted to alter any part of the chain, it could not do so without everyone immediately knowing something had been changed. To alter the information in the block would change the hash for that block, which in turn would alter the header for the following block, and so on until the entire chain looked different. Each node would be aware of this change.

Because of its structure and design, blockchain provides a security service that should be of great interest to the Department of Defense (DoD). Lockheed Martin has begun to take the first steps in finding applications for blockchain in their supply chain through a partnership with GuardTime Federal. The Navy and the DoD should follow Lockheed’s lead. The Defense Advanced Research Projects Agency(DARPA) recently awarded a grant to ITAMCO to develop a “secure, non-hackable messaging and transaction platform for the U.S. military.” While DoD interest in potential applications is encouraging, the massive amount of data involved in a messaging service likely would lead to bandwidth issues.

In addition to DARPA’s efforts, the Naval Innovation Advisory Council began a project last summer to use “blockchain technology to both securely share data between Additive Manufacturing sites [and] help secure the digital thread of design and production.” Using blockchain in 3-D printing is a good start, and blockchain should be integrated more effectively into the entire supply chain.

Sun Tzu famously said, “If you know the enemy and know yourself, you need not fear the result of a hundred battles. If you know yourself but not the enemy, for every victory gained you will also suffer a defeat. If you know neither the enemy nor yourself, you will succumb in every battle.” The national defense structure constantly is growing in complexity and size, and knowing ourselves is becoming more and more important. It is essential that the national defense supply chain has integrity.

Lieutenant Bond graduated from the U.S. Naval Academy. After a year in Pensacola, Florida, he was selected for the strike pipeline and has been training on T-45s in Meridian, Mississippi, where he hopes to earn his wings this summer.