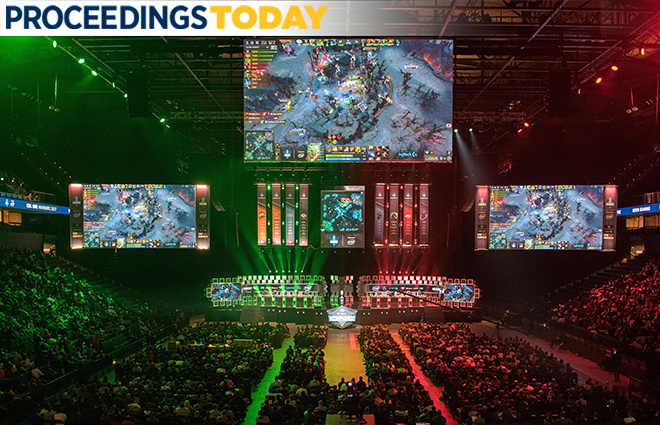 Imagine a Marine infantry battalion going into battle, Coast Guard ships conducting a drug interdiction op, or a carrier strike group fighting for sea control all with the knowledge that the tactics they will be using have been tried and succeeded in more than 100 million executions of the exact scenario they are about to enter.

This may sound like the introduction to a science fiction novel, but the technology is a reality today and has been demonstrated in the world of competitive eSports with stunning results. The advancement of artificial intelligence and powerful computers have given programmers the ability to translate the dynamic and unpredictable nature of military operations into variables in a simulation that can be run millions of times in a single day.

Experience Vs. Two Weeks of Simulation

In August 2017, an eSports competition for the complex computer game Dota 2 featured players who had spent upward of seven years playing the game, competing against thousands of top players from around the world. Dota 2 is a “real-time strategy game” that features two enemy teams attempting to lay siege to and destroy the opposing team’s base using any combination of 113 different characters, each with unique abilities and each capable of using items that enhance their abilities. The game is a dynamic team-based competition where the possible moves and outcomes are nearly limitless.

The top players from this eSport tournament were challenged to compete against an artificial intelligence bot from the Elon Musk-backed startup OpenAI. Not a single pro player was able to defeat the bot in 1-on-1 competition. The engineers from OpenAI claim that the bot was able to learn enough from playing millions of sped up instances of the game—against itself—for two weeks to beat players who have spent their entire adult lives perfecting their strategy against other professional players. The team used Microsoft’s Azure cloud-computing platform for the immense processing power required by the bot to run millions of simulations over the course of two weeks.

Operation Neptune, the operation carried out by Navy SEALs to kill Osama Bin Laden, likely required thousands of man-hours of training and repetition to meet every possible outcome with an effective response based on the tactics and experience of the SEALs. The current state of artificial intelligence would allow programmers to create variables that account for everything the SEALs accounted for in preparation for this mission down to the number of people in the building, the tactics, possible enemy actions, and innumerable other factors that could impact the success or failure of the mission. A simulation of the mission could then be run over a million times a day in which an AI could conduct the operation looking for more efficient tactics or possible shortfalls in the plan. What took thousands of man-hours of experienced humans to develop would take a computer a few minutes of processing and likely would provide insights that had not previously have been considered. While there is no substitute for training personnel to be ready to accomplish a mission, there is value in leveraging technology to supplement modes of training and give new perspectives on how future battles can be fought more effectively.

Gain an Edge Against Numerical Superiority

The U.S. military plans and conducts operations based on the experience of having done similar operations in the past. Over time, leaders and military strategists have learned lessons that guide decisions when it comes to operating. The AI developed by OpenAI does not know how to fight wars; it has no experience to draw from; and no input from professionals. In a similar way, the AI does not know how to play Dota 2—the video game it triumphed at after only two weeks of playing. The AI was not hard coded to play the game, it simply was allowed to play the game hundreds of millions of times against itself and learn how to win. Allowing such an AI to conduct complex military operations against itself millions of times will provide insights into strategies that years of military experience and lessons learned have conditioned leaders not to consider. The players defeated by the AI bot asserted that it employed strategies that they never had seen or considered until the bot beat them. Consequently, professional eSports players have adopted the bot’s strategies in an attempt to improve their performance against other professional players. Using an AI to simulate specific military operations and learn how to win will be of great utility to strategic and operational planners and even small unit leaders.

In the future, the U.S. military undoubtedly will be faced with challenges that look insurmountable. Leveraging the developing capabilities of artificial intelligence in planning and finding the most cost-effective and likely-to-succeed strategies will be of immense value. It is an understatement to say that there are complexities and unpredictable factors in military operations, especially in dynamic domains. Warfare is vastly more complex than any video game. With the rapid advancement of artificial intelligence and the vast resources tech companies are committing to AI, however, it quickly may become the key to competing successfully against peer- and near-pear adversaries and defeating them if necessary.

(Photo caption: At an eSport event, thousands of spectators watch a team play the computer game "Dota 2." Prize money at these events can be as high as a million dollars for the winning team. A bot designed by Elon Musk's company OpenAI recently beat all the professional players in a Dota 2 competition. Photo credit: Alamy)

Ensign Strong is a 2017 graduate of the U.S. Naval Academy where he studied Cyber Operations. He currently is attending primary flight training in Pensacola, Florida, to become a naval flight officer.