Ten Seconds to Live or Die 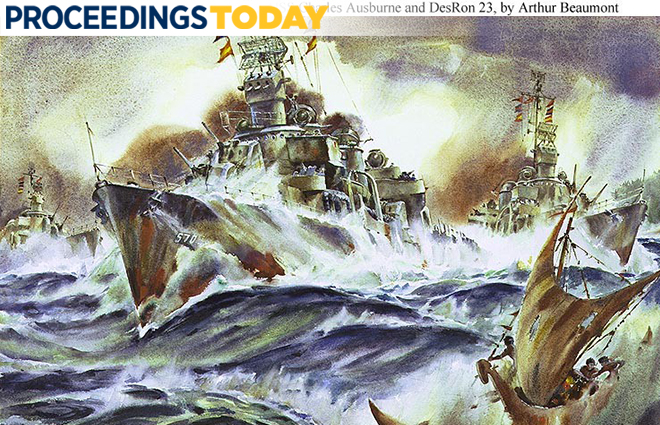 Commodore Arleigh Burke, the second commander of the storied Little Beavers of Destroyer Squadron 23, first uttered those words shortly after taking command of the squadron in October 1943. He came to this conclusion after studying the Battle of Tassafaronga and validated it through his own observations of combat at sea. The same thinking that led to future Chief of Naval Operations Admiral Burke’s conclusion, echoes today in the words of current CNO Admiral John Richardson, who states in the Design for Maintaining Maritime Superiority, “The margins of victory are razor thin – but decisive!”[1]

The Little Beavers Learn to Fight

Commodore Burke analyzed three intersecting variables to come to his ten second rule: the Japanese Type 93 torpedo (the Long Lance), the new U.S. search radar (the “Sugar George” or SG) and the necessity of mission command (what he called “faith” in subordinate commanders). The Long Lance torpedo was a monster. It was longer than 9 meters, could travel up to 20 miles at speeds up to 52 knots, and had a warhead in excess of 1000 lbs. This torpedo “out-sticked” (had a longer range) and outperformed the American Mark XV torpedo in all aspects. But, fortunately for the U.S. Navy, its range exceeded the range at which Japanese ships could detect their American prey.

This is where radar gave the U.S. Navy an advantage. The SG radar could detect enemy ships beyond 15 miles—a long distance on a dark night in the South Pacific. This advantage, however, was only realized if U.S. Navy commanders were empowered to attack as soon as they detected their foe and had a fire control solution. Waiting for permission or answering peppering questions from higher headquarters inevitably wasted the brief tactical advantage.

The mission command aspect of the fight was (and remains) essential. Commodore Burke contemplated this as he watched U.S. warships underperform early in the war. On taking command he allowed his destroyers to attack the enemy as soon as they made contact—without waiting for orders. This required the approval of his boss, Rear Admiral Aaron Merrill. Quite directly, Commodore Burke told his boss, “I want you to have enough faith to let me get going on doctrine the moment I make enemy contact, and without first getting permission from you.”[2]

The ten-second standard to which Commodore Burke trained his squadron had an immediate impact. At the Battle of Empress Augusta Bay, onboard the USS Charles Ausburne (DD-570) at the van of the formation, Burke gained radar contact, immediately seized the initiative, and went on the offensive before the enemy knew the Little Beavers were there. The battle resulted in two Imperial Japanese Navy ships sunk, four degraded by collisions as they flailed in reaction to the attack, and an overall retreat. The ten-second advantage was perfected by Burke’s squadron at the Battle of Cape St. George, which occurred deep in enemy waters on Thanksgiving Day 1943. The squadron destroyed three enemy ships, damaged another, and suffered no losses of their own.

Today, the U.S. Navy faces peer and near-peer aggressors and may be out-sticked in some environments, but it has capabilities and tactics that can work to its advantage. In addition, U.S. Navy leaders value mission command and train to the full range of their tactical capabilities. Institutionally, the U.S. Navy must recognize that the margin of victory remains roughly the same ten seconds that Arleigh Burke recognized in World War II, and it must constantly train to find that margin in combat execution.

Finding ten seconds today comes down to kill-chain proficiency that enables Navy crews to execute quickly and accurately despite the chaos, fear, and uncertainty of combat at sea. The ten-second focus is not just offensive in nature; the Navy operates in environments where an adversary may have a jump on us. Thus, crews must be so proficient in executing kill chains that they can do so when surprised, survive first contact with the enemy, and then go on the offensive immediately. Seventy five years ago, Arleigh Burke and Destroyer Squadron 23 devised the ten-second standard. It is up to the Navy’s current generation to master it anew.