Veteran Reintegration Begins on Day One 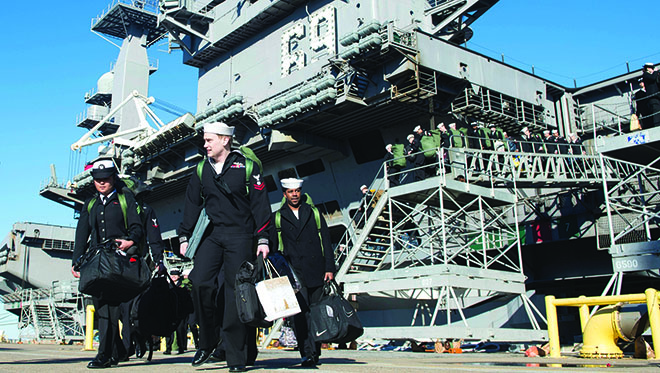 Instilling an "us versus them" view toward civilians can hinder sailors' and Marines' transition when they leave the service.

The military uses the military-civilian gap to create esprit de corps. At my first duty station, I was admonished by the leading petty officer for saying “service member” rather than “military member,” the latter engendering an elitism she felt we had earned by being among the few. This was not an isolated occurrence. Throughout my career, I have witnessed many incidents where civilians were held in lower esteem. The promotion of an “us against them” attitude seems to be viewed as a no-cost way to create pride in military service.

But service members’ belief in the unique nobility of military service manifests itself negatively when they transition to civilian life. When reintegration proves challenging, veterans are quick to blame civilians. Criticism takes several forms but typically focuses on the ideas that they are greedy, dishonest, or lazy.

One veteran I spoke with had interviewed for several jobs in the same industry without success. He attributed this to human resources people being biased against veterans. When I pointed out his negative attitude toward civilians and asked if he thought he had hidden it from the interviewers, he acknowledged they probably had picked up on it. “Would you hire someone you felt had a bad attitude toward you?” I asked. He said he would not, yet he persisted in blaming civilians rather than holding himself accountable for his attitude.

Of the dozens of veterans I have interviewed who were struggling to transition, nearly all of them had as a significant contributory issue a negative attitude toward civilians. Even after I noted and they acknowledged the attitude was counterproductive or wrong, they were loath to change it.

This response is as unsurprising as it is intractable. Having been steeped in the military-civilian divide their entire military careers, it is part of their identity.

The solution to this issue requires no new programs or appropriations. It lies in the much more difficult realm of shifting the attitude of leaders on the deckplates and up the chain of command. Starting with boot camp and officer training, we should reconsider the process of turning civilians into sailors or Marines and maintaining esprit de corps. Knowing the vast majority of recruits will serve only one or two tours, it must be done without alienating them from civilians.

First, we should call ourselves service members, with emphasis on the first word. We take an oath to uphold the Constitution. We need to be clear that the reason for protecting and defending it is to serve our fellow citizens.

Next, we must refer to civilians as our fellow citizens to foster a connection and recognize a mutuality of interest. We are fortunate to serve at a time when more than 90 percent of Americans take pride in service members and 75 percent have thanked someone in the military. We only need look back to the Vietnam era to note the change.

But how many of us have thanked one of our fellow citizens? After all, they provide the prosperity that pays our salaries, buys our equipment, and gives meaning to our service. When thanked for providing the means and meaning for my work, people are delighted to feel a part of something they obviously think is important.

Finally, we must discourage the “us against them” mind-set. We have traditions and histories glorious enough to sustain outstanding esprit de corps. When we hear negative remarks slung at civilians we must intervene and train our sailors and Marines just as surely as we would if they made any other inappropriate comment. It serves no purpose to allow such an attitude. It will harm them when they leave the military and join their fellow citizens.

Rarely in the sea services do we face a challenge that can be overcome purely through leadership. The complexity of military life often requires large outlays to build new systems and train our people. In preparing them to reintegrate into civilian life, we have in our hands the means to overcome one of the biggest issues hampering their success. The history of the Navy and Marine Corps has taught us the right attitude almost always means the difference between victory and defeat. Let’s equip our shipmates with the right mind-set as they face one of their biggest battles, rejoining fellow citizens in civilian life.

Lieutenant Commander Bemel is assigned to the Warrior Transition Program (WTP) in Sembach, Germany, where each week he and the WTP team equip a new group of sailors to resume their civilian lives and careers after deployment to U.S. Central or Africa Command.