Learn from the El Faro Disaster 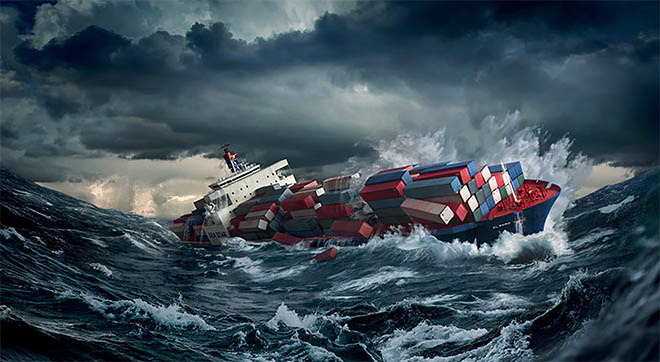 The Coast Guard should reevaluate deck officer training in light of mistakes made on the merchant ship.

A search team on the Woods Hole Oceanographic Institution’s research vessel Atlantis looked intently at their video screens and other remote sensors in the early morning hours of 26 April 2016. Three miles below, remotely operated vehicles (ROVs) scanned the bottom for clues to the location of the mast that had carried the SS El Faro’s simplified voyage data recorder (S-VDR).

The U.S.-flagged El Faro, under Master Michael Davidson, had gone down with all hands on 1 October 2015, during Hurricane Joaquin, and the U.S. Coast Guard and National Transportation Safety Board (NTSB) investigations were under way. The USNS Apache (T-ATF-172) had located the wreck in November 2015, but now the search was on for the one piece of evidence that could tell investigators what was happening on the bridge as the cargo ship faced the storm, lost power, and ultimately sank.

One of the ROVs scoured the wreckage with powerful strobe lights and cameras, looking for the bridge and the S-VDR mast, which had separated from the main body during the sinking. A strobe flash bounced off a ragged piece of reflective tape on the body of the S-VDR, but the device was in a difficult spot, and the Atlantis’s crew realized they lacked the right equipment to retrieve it.

The Apache returned to the site in August 2016 and recovered it, sending it to the NTSB in Washington for analysis. The S-VDR’s small memory chip contained 26 hours of audio recordings of critical bridge voice communication, as well as navigational information and marine radar screen shots. The tale it would tell across more than 500 pages of transcript is of a tragedy that offers stark lessons for mariners and an opportunity for the Coast Guard to reevaluate its standards for training them. 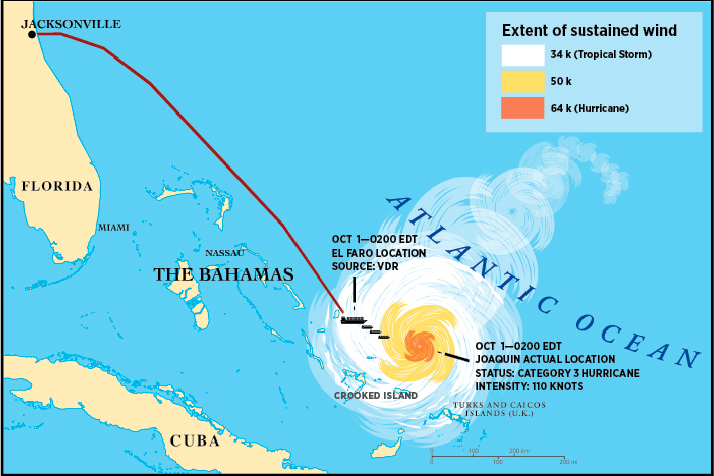 The Coast Guard investigation included three formal public hearings, countless interviews, analysis of the critical S-VDR information, documentary evidence, and inspections of the El Faro’s sister ship, the El Yunque. The S-VDR contained the audio recordings from microphones on the navigation bridge and provided extensive clues to key decisions that were made in the days leading up to the sinking of the vessel. Ten hours of the 26-hour audio eventually were transcribed for the record after the investigation teams listened to the entire recording multiple times and made notes on additional information of great value—such as voice inflection and the ambient sounds of the ship and the weather as the hurricane intensified.

9.1.1.3. TOTE and the Master did not adequately identify the risk of heavy weather when preparing, evaluating, and approving the voyage plan prior to departure on the accident voyage. . . .

9.1.1.5. TOTE did not provide the tools and protocols for accurate weather observations. The Master and navigation crew did not adequately or accurately assess and report observed weather conditions. . . .

9.1.1.10. The Master did not effectively integrate the use of Bridge Resource Management [BRM] techniques during the accident voyage. Furthermore, the Master of El Faro did not order a reduction in the speed or consider the limitations of the engineering plant as El Faro converged on a rapidly intensifying hurricane. This resulted in loss of propulsion, cargo shifting and flooding. . . .

The investigation’s scrutiny of the master’s BRM and risk identification in particular bear further discussion.

How the bridge teams functioned within each watch and across the different bridge watch teams on the accident voyage came in for close attention.

Before encountering heavy weather, the El Faro’s master did not gather the critical members of the crew to plan for vessel operations heading into a developing tropical system. The evidence indicates Davidson tended to deal with key decision makers one-on-one. This prevented development and communication of a cohesive navigation strategy that would have safeguarded the crew and vessel from serious risk.

Davidson continually downplayed the concerns of the bridge team, mischaracterizing an intensifying hurricane as a “low” or insisting that this weather was nothing when compared to Alaskan weather. Each time the bridge crew raised a concern, Davidson deflected its increasing anxiety.

Night orders that customarily are written by a ship’s master were delivered orally on the ship’s last night. There is no evidence to suggest that they were logged. In the critical hours for the El Faro watch, these verbal instructions could have caused uncertainty and ambiguity. During the final hours, as storm conditions intensified, Davidson was not on the bridge.

On the recording, members of the bridge crew are heard expressing their concerns.

The able seaman on watch speaks:

“What if we get close—we get jammed in those islands there and it starts comin’ at us. I don’t know.”1

The third mate, the officer in charge of the navigational watch, speaks:

“Turn around and go back.”2

The El Faro deviated from its typical route to pass between two islands, San Salvador and Rum Cay—a gap of approximately 15 miles. It appears there were no amplified instructions for enhanced navigation procedures or notification to the master when approaching this critical turn toward Puerto Rico. There is no audio evidence the bridge crew took additional radar fixes or visual bearings or used other position-fixing methods as the El Faro headed toward this narrow passage, even as the weather worsened.

The second mate experienced unexplained noises and flashes forward as well as difficulty maintaining course with the ship’s autopilot as the effects of the hurricane made themselves felt. Despite these important events, the master was not notified.

An examination of the available evidence indicated that the shipboard officers did not identify the unique location of the formation of Hurricane Joaquin and its initial slow movement to the southwest as a special risk to this voyage.

There were no heavy-weather vessel-specific plans for the El Faro that identified special precautions for the ship to take as it approached a hurricane. Such procedures typically would include improving the vessel’s stability, using better and more secure lashings, and maintaining extra vigilance regarding watertight integrity.

The officers did not take into account the vulnerabilities of the 40-year-old El Faro. Because the ship had handled the extreme weather in Alaskan waters, the officers assumed the hull could take the punishment of a severe hurricane in the Atlantic. She had become a different vessel in terms of stability, however. A change in her configuration after leaving Alaska had lowered her waterline almost two feet—bringing her cargo hold ventilation openings closer to the surface of the sea.

But the real Achilles’ heel for the ship was the critical main engine lube-oil sump storage tank, its associated piping, and the crew’s management of this system:

“Captain—Chief mate. The chief engineer just called and (then/they) called back again (yeah) something about the list and oil levels.”3

The oil-sump levels were maintained lower than required, and the crew did not know that the suction-bell mouth was offset to starboard in the oil tank. The critical danger was that a sustained list to port combined with a low sump level would—and did—lead to a complete loss of propulsion and catastrophic engine failure. This came at a time when the ship was most vulnerable to the mountainous seas and hurricane-force winds.

The tragedy that befell the crew and the El Faro was avoidable, even with the forecasting errors for the hurricane, the delayed weather reports, and errors in the data for the weather software.

Effective use of the principles of BRM should result in cross-checking decisions to ensure bridge decision makers are assertive in expressing their concerns and that all bridge personnel understand and are comfortable with the details of the voyage plan. Properly understanding the engine-oil sump and maintaining the correct oil level likely would have prevented the catastrophic loss of power. The mistakes of the officers and crew are correctible and avoidable, and the Coast Guard report’s safety recommendations should form the basis for regular conversations among all crews on operational safety.

The routine voyages back and forth to Puerto Rico were referred by TOTE management as a “milk run.” This assessment of the routine schedule for the short round trips to San Juan created an air of complacency that permeated all aspects of the El Faro’s operation. Several ready-made voyage plans existed for the officers to choose from, and there was a notation on the departure messages that the master had reviewed and approved them. But there was no requirement to report the route the ship planned to use for any voyage.

Shoreside personnel would assume that the ship planned to take a direct route to its destination. Using only the departure messages and the noon position reports that described position in latitude and longitude, the shoreside managers would not have been able to determine easily the ship’s route or position without manual plotting on a navigation chart, despite the fact many web-based, easily accessible programs can track the position of a commercial ship graphically.

The bridge team did not act as the situation deteriorated. The plan was to maintain a closest-point-of-approach (CPA) of 65 nautical miles from Hurricane Joaquin. Almost the moment that plan was formalized, however, that objective could not be achieved. The 65-mile distance from the unpredictable hurricane put the Bahamas Island Bank and its dangerous shoal water just downwind of the ship’s track. With each mile along the track, the CPA to Joaquin was reduced, and safe options disappeared.

The plan also called for the ship’s full speed of more than 20 knots to be maintained, and—as the transcripts show—the master was relying on that speed. Heading into an intensifying hurricane and expecting to maintain full speed on a loaded, 40-year-old cargo ship was an ill-conceived strategy.

The Coast Guard published in late 2017 its Report of Investigation on the El Faro sinking and the loss of her 33 officers and crew, more than two years after the disaster. One of the key safety recommendations spoke to improving the competency and training for mariners:

Recommendation #18—Evaluation of Mariner Training Institutions and Coast Guard Merchant Mariner Credentialing Process. It is recommended that [the Coast Guard] Commandant direct a review of the EL FARO VDR transcript and this Report of Investigation, specifically focusing on the effectiveness of the Coast Guard credentialing exams and third party provided training including navigation simulators, heavy weather avoidance, cargo lashing/securing, stability, damage control, and bridge resource management. The Coast Guard should use the review to identify potential areas and competencies needing improvement and expeditiously develop a plan to implement those findings into the mariner credentialing process.4

The tragedy that befell the El Faro and her crew was avoidable, even with the weather-related forecasting and reporting errors. Studying its lessons can prevent similar future accidents.  Effective use of BRM principles would ensure that bridge decision makers are assertive in expressing concerns and that all bridge personnel understand and are comfortable with the details of the voyage plan. Identifying the many risks facing a ship and her crew and having a coherent strategy to manage those risks that the entire crew is comfortable with and understands are fundamental safety practices that should fall under a company’s safety management system.

1. The able-bodied seaman and the third mate were the bridge watch, talking about the events that lay ahead. Shortly before midnight and the relief of the watch, the third mate would make two calls to the master to update him on the position of Joaquin and also his suggestion for an alteration of course to the south and through Crooked Island Passage. The suggested route through Crooked Island Passage would have put the hurricane on the El Faro’s stern.

3. S-VDR 04:40:33.7 to 04:40:54.3, 1 October 2015. The increasing list would lead to the interruption of the critical lube oil supply to the ship’s engine and the loss of propulsion, eventually turning the ship beam to the hurricane force winds and seas.