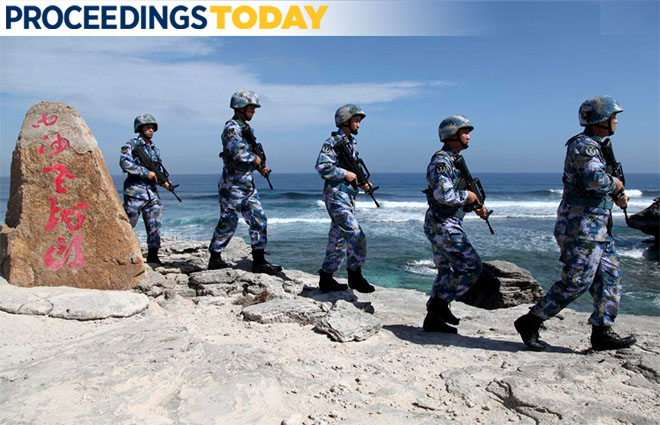 Several recent Proceedings articles have called for the United States to counter Chinese expansion in the South China Sea by employing the U.S. Coast Guard to improve East Asian maritime governance. Certainly, the Coast Guard represents a unique and powerful tool for the nation within the maritime realms, and the South China Sea problem needs all the coordinated forces that can be mustered. Nonetheless, the nature of conflict in the South China Sea means a focus on maritime governance—the U.S. Coast Guard’s unique strength—would at this point be too little too late, having only limited impact on the dynamic of the region.

It’s not the fish.

It is a fundamental misunderstanding that the current tensions in the South China Sea are driven by resource scarcity. The idea that the situation is driven by the desire to monopolize the wealth of the sea, either hydrocarbons or fish, is a comfortable one. It places the conflict in an understandable framework—everyone wants their share of the commons—and ultimately suggests some kind of equitable solution can be found. Such resource apportionment conflicts lend themselves to cooperative agreements like the Svalbard accord.

The problem is that resources are an incomplete answer for the tensions and no longer are the most important factor. Among the claimants, Beijing is conspicuously not making money from its efforts in the South China Sea. The costs of reclaiming more than 3,000 acres of sand, maintaining it against storms and tides, and ensuring its security against all rivals are high. Against this expense, Beijing has extracted no hydrocarbons from the contested areas of the South China Sea. If China’s goal were access to resources, it could have cooperated with its neighbors within established international law and been drawing from the South China Sea’s central gas fields for years. Its fishing fleets have operated farther south, but arguably only through heavy subsidy and with the expense of constant China Coast Guard and People’s Armed Forces Maritime Militia (PAFMM) protection. There is no such thing as profitable fishing with an armed naval guard.

Fundamentally, Beijing’s assertions in the South China Sea are driven by, and in turn feed, a nationalist narrative that is central to the legitimacy and survival of the Chinese Communist Party. When, on the 90th anniversary of the founding of the Chinese military, Xi Jinping stated, “We absolutely will not permit any person, any organization, any political party—at any time, in any form—to separate any piece of Chinese territory from China," he was not articulating a thinly veiled desire for more natural gas concessions.[i] Beijing may entertain cooperative development, but it insists that negotiations always open with the other parties conceding its essential core requirement—recognition of Chinese sovereignty over the area in question. Indeed, PRC willingness to contemplate joint economic activity, after the sovereignty concession is made, underscores that the conflict is not about fish, oil, or gas.

It is a second fallacy to suggest the South China Sea is primarily a maritime governance problem. Certainly, there are genuine governance issues in the South China Sea. The Gulf of Thailand struggles with illegal, unreported, and unregulated fishing. The Celebes and Sulu seas have become a route for illegal movement between Malaysia and the unstable southern Philippines. Each of these challenges lends itself to a maritime law enforcement solution.

The irony, of course, is that our Chinese colleagues would agree there is a maritime governance issue in the South China Sea, but they would assert the answer is China’s effective and professional administration. The newly formed China Coast Guard has worked hard to portray itself as a world-class maritime law enforcement organization, and the PRC regularly asserts that the newly reclaimed features in the South China Sea are a key element of this civil administration. In areas where U.S. and Chinese interests align, such as combating high seas driftnet fishing, China Coast Guard and law enforcement can be effective partners, underscoring that the issue is not about professional competence.

In this environment, building the capacity of U.S. partners can address any issue except the core sovereignty issue. Beijing’s demonstrated willingness to escalate horizontally and vertically means most claimants must balance active and effective administration of their claimed waters with Beijing’s likely response. They well recall the Philippines’ experience at Scarborough Reef in 2012, when the Philippine Navy attempted to stop illegal fishing by Chinese vessels. Beijing quickly escalated with overwhelming China Coast Guard and People’s Liberation Army Navy presence. The result has been a constant PRC presence and the Philippines’ effective loss of control of the area.

Not a Low Risk Solution.

There is no meaningful scenario in which having a U.S. “white hull” alone and in contact with Chinese maritime forces reduces the risk to U.S. interests or operations. The perception that U.S. Coast Guard units are less escalatory rests on their claim to be administering law in waters under sovereign control. U.S. Coast Guard units have no such status in the South China Sea. If present during a confrontation with a friend or ally while not empowered to act, they damage the prestige of the United States with the stigma of having observed and done nothing. If empowered to act, they represent the proverbial knife in a gunfight, poorly equipped to deal with potential escalation.

While the U.S. Navy often assumes it will work alone, the effort to secure freedom-of-navigation needs support and capacity from U.S. allies and partners across the globe. Within this context, the U.S. Coast Guard would be a welcome force provider from within the U.S. national fleet.

Further, there are also areas outside the South China Sea where resources are the central issue. As Coast Guard Captain Jay Caputo observes in the August Proceedings, Chinese fishing fleets are pushing into new areas, including waters where U.S. law enforcement is in the lead. Noting the tendency of the China Coast Guard and People’s Armed Forces Maritime Militia to accompany and protect Chinese fishing vessels—even those violating international and national laws—Captain Caputo argues that “it is imperative that the Coast Guard be prepared for when the Chinese fishing militia approaches the U.S. EEZ.” That clearly would be a Coast Guard mission.

By all means, bring the U.S Coast Guard to the western Pacific. Leverage its extraordinary professionalism and guardian ethic to partner with friends and allies. Better maritime law enforcement is a common good, and supporting it is a sign of U.S. commitment.

We just cannot delude ourselves that such efforts will change the fundamentals that drive instability in the region.

Captain Rielage serves as Director for Intelligence and Information Operations for the U.S. Pacific Fleet. He has served as Third Fleet N2, Seventh Fleet Deputy N2, Senior Intelligence Officer for China at the Office of Naval Intelligence, and Director of the Navy Asia Pacific Advisory Group.