Lest We Forget: March of the Women Marines: Colonel Ruth Cheney Streeter 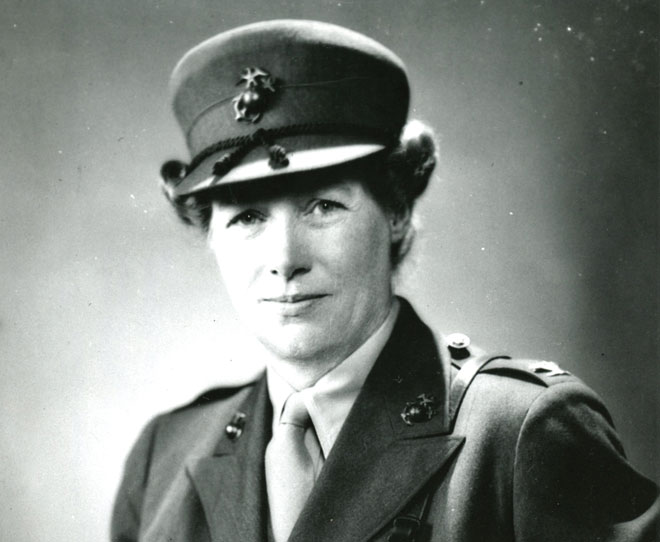 Many years after the war was over, I think about 20 years after, I got a letter from a former sergeant in the Women Marines, who was apparently a very capable office worker and had gotten quite an important job in the Veterans Administration, and she had been a Women Marine in World War II.

She wrote me out of the blue sky, and she said “I’ve never seen you. I’ve never heard you speak. But I do want to tell you that I think the organization of the Women Marines was so much better than anything I’ve found since.”

If that letter came out of the blue, Colonel Ruth Cheney Streeter’s selection to become the first director of the U.S. Marine Corps Women’s Reserve—as she recalls in her Naval Institute oral history—came out of the deeper blue. Streeter was a happily married mother of four in her mid-40s when she earned her commercial pilot’s license in 1940. With World War II looming, she wanted to fly for the military, but the Women Airforce Service Pilots (WASPs) rejected her repeated applications: “Too old.”

By late 1942, she was resigned to being unable to fly and so was surprised when friends, and friends of friends, recommended her for the U.S. Marine Corps. She was interviewed by Colonel L. W. T. Waller Jr. and his assistant in the Reserves, Major Brewster Rhoads. She emerged as the Corps’ top choice, and on 29 January 1943, she received her commission as major and was sworn in as the first director.

The Corps was not too certain about all of this at first. The idea of a women’s reserve had come from much higher up in Washington. Streeter found two desks in her new office, one hers and one for Major Rhoads, her “running mate.” They worked side by side for the first six months, as Streeter made her way in the Marines’ strict, chain-of-command style. When she complained to her counterparts in the Army and Navy women’s reserves—the WAACS and the WAVES—over the close supervision, they assured her she had had good luck. They had been totally lost when they first assumed command. The WAVES, in fact, trained the first officer and enlisted Marine classes, until Women’s Reserve training was established at Camp Lejeune.

Her first month in office, Streeter made a major tour of the United States, recruiting and telling her audiences how desperate the war situation was.

I was coming from New Jersey. I was able to tell them about our ships being sunk in plain sight of Atlantic City. In the interior, this was not entirely realized the way we on the coast realized it. That was the first thing, that they were needed, that this was no show, that this was a vast necessity. And then the theme, of course, was always, “Free a Man to Fight.”

And that we could do as women in business had long been doing. There were many places where we could do just as well in this country as the men could and, in some cases, better. This was our function. Later on, the Commandant of the Marine Corps told us that without the women in the Marine Corps, the 6th Marine Division could not have been activated.

They had a bench on a wire instead of a parachute for the benefit of the women. Eugenia Lejeune, the general’s daughter, was going through Officers Candidate School and we came down on the bench together. But you can’t tell me that some enlisted man handling the wire didn’t let us down with a good big thump!

On 6 December 1945, the war over, Colonel Ruth Cheney Streeter resigned her commission.