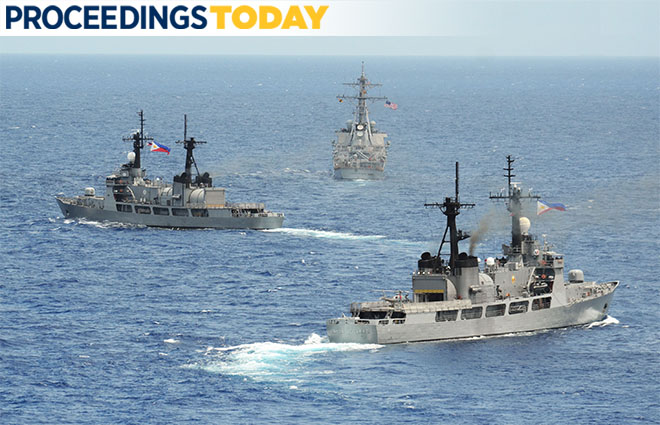 The United States transferred the decommissioned 378-foot Boutwell (WHEC-719) to the Philippine Navy on 21 July 2016 in Alameda, California. Renamed the BRP Andrés Bonifacio (FF-17), the ship arrived in the Philippines on 9 December. The Philippines now operate three former U.S. Coast Guard cutters, all of which have been upgraded and reclassified as frigates.

The presence of these frigates is significant, as tensions in the South China Sea have been rising the last few years as China and the People’s Liberation Army Navy (PLAN) have expanded increasingly and aggressively into the Philippines’ backyard. Although Philippine President Rodrigo Duterte has stressed rapprochement with China, the PLAN has been involved in several standoffs with the Philippine navy at Scarborough Shoal, off the island of Luzon.

The PLAN’s aggression has increased the pressure on the Philippine Navy to modernize its largely World War II-era fleet. Although the U.S. Coast Guard is significantly smaller than the U.S. Navy, it is larger than many foreign navies, and is decommissioning a portion of its current fleet as it transitions from the 1960’s-era Hamilton-class high-endurance cutters (WHECs) to the newer, larger Legend-class national security cutters (WMSLs).

At 378 feet and 3,250 tons displacement, the WHECs are smaller than the Navy’s Oliver Hazard Perry-class (FFG-7) guided-missile frigates but larger than most corvettes, and they offer a significant upgrade in size and capability over the previous flagship of the Philippine Navy, the World War II-era (ex-U.S. Navy destroyer escort) BRP Rajah Humabon. The WHECs were designed during the Vietnam-era primarily for maritime law enforcement and search-and-rescue efforts rather than for naval warfare, but they offer multiple advantages over the FFG-7’s for the Philippines specifically.

The WHECs have more than two times the range of the FFG-7s, require a smaller crew, have lower maintenance costs, and have nearly the same top speed. Although the Coast Guard’s cutters are one to two decades older than their FFG-7-class brethren, the WHECs have been tried and tested for nearly five decades in a variety of roles, including war time patrols off Vietnam, search-and-rescue in the Gulf of Alaska, drug and immigrant interdiction in the Florida Straits, and humanitarian assistance in the Black Sea after the Russo-Georgian War in 2008. This mission set closely matches the Philippine Navy’s mission requirements, which include sovereignty patrols, maritime law enforcement, search-and-rescue, and humanitarian assistance/disaster response over a large area.

In 2011, the Coast Guard and DSCA transferred the first decommissioned WHEC to the Philippine Navy. After upgrades, training, and familiarization with USCG crews, the lead frigate, BRP Gregorio del Pilar (FF-15), was commissioned into the Philippine Navy as the largest ship in the fleet. Interestingly, the Gregoria del Pilar’s namesake was a Philippine Army general who died in 1899 fighting the Americans in the Spanish-American War. A second WHEC was transferred in 2012 and renamed the BRP Ramon Alcaraz (FF-16).

Since 2011, the Gregorio del Pilar has been involved in multiple search-and-rescue and humanitarian assistance events, including responding to typhoon Haiyan in 2013 and searching for Malaysian Airlines Flight 370 in 2014. It also has conducted regular sovereignty patrols in the South China Sea, including a standoff with Chinese ships at Scarborough Shoal in 2012. The BRP Ramon Alcaraz has been similarly engaged, including a recent maritime law enforcement exercise with the Australian Navy.

The Philippine Navy is taking full advantage of the multi-role capabilities and versatility of its ex-Coast Guard cutters, and it may be interested in acquiring more of these ships as they become available. The United States has transferred two decommissioned WHECs each to Nigeria and Bangladesh; one WHEC is scheduled to go to Vietnam. Four WHECs remain active in the U.S. Coast Guard.

The geopolitical situation in Southeast Asia and the U.S.-Philippine relationship are unstable. The U.S. Navy’s downsizing after the Cold War left a security vacuum that other countries have sought to fill. Multiple regional nations are involved in sovereignty disputes over large areas of the South China Sea. In the middle of this, the Chinese Navy and Chinese civil maritime forces have acted aggressively to enforce Beijing’s sovereignty claims in the region. After throwing the U.S. Navy out of Subic Bay naval base in 1992, the Philippine government entered discussions in 2014 to allow the Navy to return in a limited role. The outcome of these discussions remains to be seen.  In October 2016, Philippine President Duterte announced détente with China.

This recent history implies things will continue to change. It is in the best interest of the Philippines and the United States to work closely together on long-term regional security and maritime issues. It is also important for the United States to invest in Philippine security and infrastructure, as the country is a treaty ally and a counterbalance to China. The acquisition of another ex-USCG cutter by the Philippine Navy is a wise investment which will increase the size and capability of their fleet.

Going forward, the Philippines will need more cost-effective ships to replace its aging fleet, particularly its World War II-era corvettes. Obviously, there are many options to fill that need. The Philippines could order new frigates or corvettes from Germany, France, or China (as Malaysia recently decided to do), or it could continue to buy used U.S. Coast Guard cutters. The Philippine Navy has operational experience with the cutters and has developed a strong training relationship with the U.S. Coast Guard. Acquiring additional Coast Guard cutters would complement existing fleet commonality and capitalize on the expertise the Philippine Navy has developed in its ranks to train new sailors.

To fill its requirements, the Philippines could purchase medium-endurance cutters (WMECs), which the Coast Guard is retiring and replacing with the offshore patrol cutters (OPCs) beginning in the 2020s. WMECs primarily come in two classes: the 210-foot Reliance class and the 270-foot Famous class. These cutters displace roughly 1,100-1,800 tons—similar in size to Germany’s Braunschweig-class corvettes. Twenty-eight of these cutters are still operated by the U.S. Coast Guard. Like the WHECs, the WMECs can be modernized and upgraded after transfer to the Philippine Navy, providing versatile multi-mission capabilities.

Lieutenant Baker is currently stationed on the West Coast. His most recent assignments were at the Naval War College, U.S. Coast Guard Headquarters, and a U.S. Navy Coastal Riverine Squadron.