Fitzgerald: When A Big Ocean Gets Small 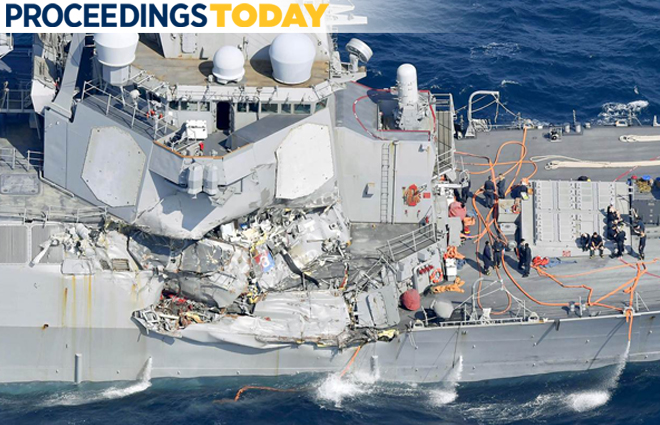 It is a big ocean. Until you have been far into it, it is really hard to appreciate just how big. Bringing a ship back from Japan to Hawaii, I once went ten days without seeing another ship, either by eye or radar. That is a long time to be alone in the world, especially if you are moving in a straight line and at good speed.

On the other hand, you would be surprised at how crowded the ocean can get in certain places. The Strait of Malacca, for instance, divides the island of Sumatra from Malaysia. Not only is Singapore at the southern end—one of the great maritime ports of the world—but most of the shipping moving between Asia and Africa, the Middle East, and Europe, travels through this increasingly narrow, 600 mile-long passage. Every year, 100,000 ships transit this strait. By the way, these confined waters are infested with pirates and literally thousands of fishing boats. While a chart may make the strait seem wide, the passable channel for big ships is only a couple of miles wide.

Challenging By Day, Frightening at Night

Tokyo Bay or “Tokyo Wan” is like that. Yes, the area where the USS Fitzgerald (DDG-62) collision took place is more wide open than the Wan itself, but just like the approaches to Norfolk or Boston or Los Angeles, dozens of ships are approaching at any time, all heading for a very narrow entrance channel, all on tight schedules. Think of it as a funnel, necking down to the shipping channel which goes into the port. Outside the shipping channel, which has strict rules, the mouth of the funnel is the Wild West for ships coming and going. It can be challenging during the day, but at night it can be frightening.

On any given night, ships will mill about, outside the shipping channels, waiting for dawn when they can both use their eyes to help, and meet the pilots who will berth their ships in port. All those huge ships, waiting their appointed time creates a mess. They may drift or they may travel in circles or they may give themselves a box to stay in while they await first light. Personally, I tried to avoid this mess by slowing my track so that I did not even arrive at the funnel mouth until dawn, but sometimes you do not have a choice, and you spend tense hours trying to avoid other ships, praying for the light. 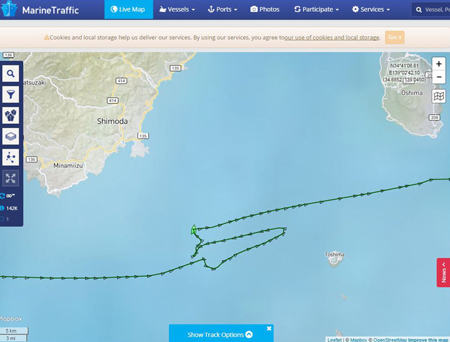 Track route of the ACX Crystal that collided with USS Fitzgerald (Maritime Traffic).

Imagine you are on the bridge of your ship and you are waiting off Tokyo—or more specifically, Yokosuka—Fitzgerald’s home in Japan—which is right down the coast. There may be moonlight, which is a help, or the sky may be overcast, or there may be no moon, or maybe the moon rose and set earlier, or maybe it will rise and set later. The point is that it can be utterly black at sea. Most people have no idea how black.

What do you see with your eyes off Tokyo? You see on the horizon a universe of lights. Some originating from land, some from ships. Some moving, some not. There are many different colored lights. Many are engineered to be visible at specific ranges and that may be of some help. The visibility of a ship’s masthead light, for example, is supposed to be six miles. A sidelight is three miles. But the weather and other atmospheric and physical variables may increase or decrease the visibility. In other words, if you see a ship’s masthead light suddenly appear, you may want to believe, “Oh, that dude is six miles away for me.” But, maybe not. You need to worry about all of these lights until you figure each one out. What are they doing? Where are they going? Are they closing me? Which ones should I worry about and how soon? The composition of these lights is constantly changing too, as ships come and go. As fishermen appear and disappear. As lights on shore go on and off though the night. In other words, it is a very complex puzzle for even the most experienced mariner.

You decode the puzzle by using your radar and your charts to associate these lights with ships or objects on the beach. Just as your eye is not perfect, neither is a radar. Different radars have different characteristics, and they are each better or worse at varied ranges and in different situations. Some are good in rain, some do not even remotely help in a heavy rain. Every sailor can think of a time that they came across a ship or boat, which in seeming denial of the laws of physics, remained undetected by radar, only to be seen and avoided at the last minute. Ideally, you have several different radars, in concert, as well as the Automatic Identification System (AIS) which tracks the transmission of a discrete identifier by most ships.

Who Is On the Bridge?

While we do not yet know who was figuring this all out on the night of the Fitzgerald’s collision, here is how it works at sea in a Navy ship. The commanding officer (CO) is “on call” 24/7. He or she sleeps in a cabin only a few feet away from the pilot house, where all of this “figuring” occurs. COs stays up late, and rise early. They do not even want to sleep, because if anything goes wrong, they inevitably and historically are going to be identified as the responsible party. In a congested seaway, the CO will often “sleep,” if it can be called that, in his chair on the bridge. Often the best team is assigned watch in those most dangerous situations. There are many solutions, but into this mix must be added the possibility that it was a regular watch on the bridge, and the CO, believing the ship was “in the clear,” had left the bridge and gone to his cabin. 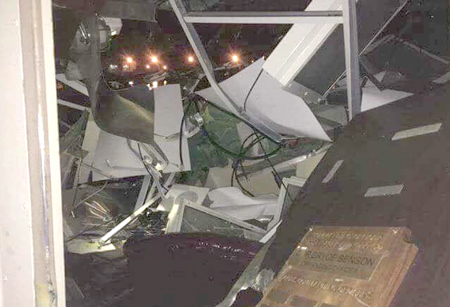 Looking out from the commanding officer’s stateroom of
USS Fitzgerald (DDG-62) after the collision (Courtesy of Scott Norman).

Who is in charge at night when the CO is sleeping or during the day when he or she is doing something else? The captain alone is responsible for “qualifying” the “Officers of the Deck” (OODs). These are the young officers or very experienced chief petty officers, who are charged to act in the CO’s stead, when he or she is not in the pilot house. These OODs may be salty, or they may be green as grass. Only the captain can decide when they are ready to stand the watch as OOD. But, you must understand that there is pressure to qualify officers for this watch, for to not qualify a young officer as OOD is a death warrant for that young officer’s career. If you are not an OOD, you are of no use to the fleet. Actually, to not qualify an officer can sometimes get a captain the sort of attention that is unwanted, and to not qualify more than one officer, regardless of their capability or capacity, is a recipe for trouble. The expectation is that the captain will train and qualify all the officers assigned under his or her command. Not to do so will cause some to think that the problem lies with the captain, and not the quality of the officers who fail to qualify.

There are, however, some unfortunate “solutions.” The worst thing a captain can do is to wait until just before an officer transfers and qualify him or her, effectively passing on the problem to the next ship. Or another poor action is to qualify an officer as OOD, but never have him or her to stand the watch. Sadly, not every OOD is a good and able one.

Normally a captain qualifies all officers in due course, and then relies upon a system of checks and balances and back-ups and structure to protect the ship until they grow fully into the job. It is a big deal to be an OOD, entrusted with a billion dollar ship and the lives of several hundred crew.

This is the burden of command. A captain puts the lives of several hundred sailors into the hands of a young officer, typically 25 years old and typically green. So what does a captain count on to prevent disaster? The captain has “standing orders.” These are the rules in his or her ship that everyone (especially the OOD) lives by. These are the unbreakable laws modifiable only in writing by the Captain. One of these laws is, “Call me when any ship comes within 10,000 yards (5 miles) of my ship.”

So, all through the night the captain is receiving phone calls when the ship is near land. Typically the report goes like the this: “Sir, this is the Officer of the Deck…I have a contact, broad on the starboard bow at 12,000 yards. He is drifting left to a CPA [closest point of approach] on our port bow, at 6,000 yards, in 20 minutes. My intention is to maintain course and speed.”

When the OOD calls, the captain envisions the situation in his or her head and then either concurs with the recommendations of the OOD or, if necessary, gives instructions. Sometimes, if the OOD is concerned with the situation, the officer will ask the captain to come to the pilot house. Other times, the captain gets a bad feeling and she goes without being asked. A captain has to know the OODs strengths and weaknesses. The COs need to know how to read voices—does the OOD sound settled and confident? Is there a hint of concern? What time is it?

It is in this area where things can and do go wrong. Sometimes, an OOD is afraid to call the captain. Maybe the captain is intimidating. Maybe the OOD, despite the best of intentions, lets a ship get within 10,000 yards before calling. Now the OOD may understand that he or she is in peril of getting rebuked by a captain who cannot possibly understand why the OOD did not understand the meaning of 10,000 yards. Maybe the OOD will lose the captain’s trust? Maybe the CO will fire the OOD—which would be painful and humiliating.

Captains must be careful not to get mad or cranky when called. You do not want to make your OODs hesitant to call. It takes a ship going 15 knots only 6 minutes to go 3,000 yards. If your ship and the approaching ship are traveling at 15 knots, the range can decrease by 6,000 yards in 6 minutes. At night, with all the confusion in a busy seaway, the approaching ship can be on you before you know it.

A Sea of Risks

It is too early to speculate exactly what happened in the Fitzgerald that night. One thing, however, is certain. The Navy will leave no stone unturned to determine exactly what happened and why. For the rest of us, the tragedy of the untimely death of young sailors reminds us that driving ships, has always been, and always will be fraught with risk.

When Am I Committed to a Collision? … Lieutenant Jotham M. Myers, U.S. Navy Reserve