Close the Hole in the Navy's "Wholeness" Argument 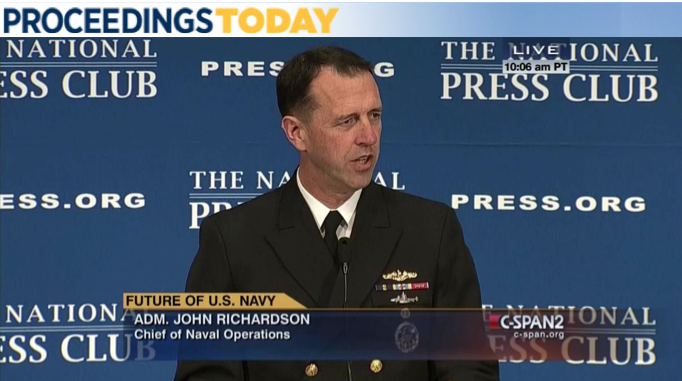 The Navy seems to have lost sight of its stated goal of getting the fleet to 355 ships, or even the President’s stated goal of achieving a 350-ship fleet. During their recent statements to the House and Senate Armed Services Committees, acting Secretary of the Navy Sean Stackley and Chief of Naval Operations Admiral John Richardson emphasized that their priorities within the fiscal year (FY) 2018 budget were to improve readiness and fully fund the Navy’s maintenance accounts. Admiral Richardson described the initiative as adding “wholeness” to the force by increasing the number of personnel—both active duty and civilian—as well as by spending more on ship maintenance. Richardson went on to state, “These investments are designed to help reverse years of significant strain on the fleet.” When pressed during questioning by several legislators, to include Armed Services Committee chairman and retired Navy captain Senator John McCain, on whether the additional funding provided within the FY 2018 budget should have been spent on acquiring more ships, the Navy’s leadership team replied that the best use of additional funds, at this point in time, is on fully funding readiness and maintenance accounts. There is, however, a hole in the logic of this argument.

Today’s Navy has 276 ships, of which 100 are currently at sea or deployed. That number just dropped by one with the tragic USS Fitzgerald (DDG-62) collision at sea. An average of 95-105 ships have been under way on any given day defending the nation’s interests around the world for the past generation. This was fine when the fleet was at 404 ships in 1994, as this meant that 25 percent of the force was deployed, 25 percent in maintenance, 25 percent working up for deployments, and 25 percent transiting either to or from deployment sites. At today’s numbers, a consistent 100 or so ships under way represents approximately 35 percent of the fleet, and the deployment rotation is significantly degraded. Given that training cannot be shortened without sacrificing deployed readiness, and it still takes the same amount of time to get to and from deployment sites, maintenance availability is the only place in the schedule that can be compressed to keep the fleet sailing along. Thus, “wholeness” to the force in the form of repaired and well-maintained ships can be reestablished through only one of three methods.

First, the nation could stop asking the Navy to do the same number of deployments with a smaller fleet. Reestablishing the former patterns of deploying only 25 percent of the fleet at any given time to ensure maintenance-training-transit-deployment ratios would provide the appropriate amount of time in the home-cycle for the Navy to properly maintain its warships. This would reduce the deployed force by 25 to 35 ships and create an unfortunate gap in three or more of the 18 maritime zones that have been identified by regional combatant commanders as being critical to U.S. national interests. Over time, these gaps likely would lead to the erosion of local adherence to presently accepted rules of order, such as freedom of navigation and the characterization of the high seas as a global commons—open to all who wish to sail on it.

A second option is to base more U.S. ships in overseas ports. Currently we have approximately 30 ships forward deployed on a semipermanent basis in Spain, Japan, and Bahrain. These ships generally are credited as providing 0.5 presence credits (U.S.-based ships are scored with a 0.25 presence credit) in Navy rotational force models, as they are immediately “on station” the moment they come out of their home ports, rather than having to transit across the oceans to reach their patrol areas. If the Navy were to make significant investments in overseas bases, in terms of housing, piers, and maintenance facilities, to allow for additional ships, their crews and their families to be forward based, it would lessen the strain on U.S.-based ships. Given there is a growing conversation about the need for a new round of base closures in the United States, however, gaining political support for investments in additional overseas infrastructure may be difficult.

A third, better alternative is to build a large enough fleet so that 100 deployed ships would once again represents 25 percent of the total Navy. This would mean a fleet larger than the 355 ships called for by the Navy in December 2016, perhaps something closer to the 450-ship Navy that former CNO Admiral Jonathan Greenert advocated in March 2014. Greenert’s plan is unlikely to receive congressional support because of cost, but funding the 355-ship Navy envisioned by the President and the Navy would allow a greater portion of the current fleet to enter into maintenance availabilities more consistently and stay there longer. The best way to restore “wholeness” to the fleet—given simple math and a respect for the historical ship rotational cycle—is to increase its size as quickly as possible.

There are a number of paths to rapidly achieving a larger Navy. The Navy already is planning to build 80 new ships over the next eight years. The planned decommissioning of 49 ships during the same time period, however, lessens the impact of the shipbuilding plan. If the Navy could extend the lives of some of these ships through service life extension programs (SLEP), that would add significantly to the number of ships available for deployment. There also are 50 ships in the Naval Sea Systems Command Inactive Reserve fleet—popularly known as the “Ghost Fleet.” Ten of these are in Mobility B status, and another 11 are available for foreign military sales. Nearly $170 million a year is budgeted to ensure these categories of ships are available for return to the fleet in a time of need. If half of the ships in these two categories could be reactivated and returned to the fleet, they would have an immediate impact on deployment cycles and “wholeness.”

The United States also must build more ships. There is ample industrial capacity to increase ship production above the Navy’s current plans. In a February 2017 white paper, the Navy itself produced an “accelerated” shipbuilding plan that added 29 ships to the fleet over the next seven years by taking “warm” destroyer, submarine, and amphibious ship production lines and turning them “hot.” This initiative, however, pursues a conservative approach and invests largely in the most complex and expensive platforms. It would continue the Navy’s post-Cold War trend of investing in platforms of higher capabilities while shrinking the size of the fleet. While attractive from a budgeting perspective, this approach leads to a real quantity problem for the Navy.

The Navy would do well to take a lesson from the late 1960s to mid 1970s era when it explicitly pursued a “hi-low” procurement strategy. Then, in the aviation context, the Navy purchased a small number of highly capable long-range fighter interceptors in the F-14 Tomcats while also acquiring a larger number of cheaper F/A-18 Hornets for the inner battle. Similarly, the Navy purchased approximately three low-end antisurface/antisubmarine Oliver Hazard Perry (FFG-7)-class frigates for each high-end air-defense Ticonderoga (CG-47)-class cruiser. Today the Navy should consider doing something similar for the surface fleet by forgoing an additional $1.8 billion destroyer and instead purchasing two $750 million frigates and a couple missile-laden high-speed vessels. This adds four ships to the fleet instead of one. Over the next seven years, such a hi-low procurement strategy could add nearly 40 ships to the fleet.

Legislators were right to appear skeptical of the strategy presented by the Navy’s leadership at its recent round of congressional hearings. “Wholeness” is an attractive vision. After years of decline and operational turmoil, it would be good to establish some sense of balance in the fleet, invest in our shipyards, and build enough “slack” into the home-cycle schedule to send the ships through a thorough maintenance cycle. But so long as U.S. maritime interests are worldwide, building more ships is the only path to meet combatant commander requirements and achieve balance in the fleet.

Getting to the President’s goal of 350 ships quickly through SLEP, return of selected ships in the reserve fleet, and new construction is the Navy’s best path to close the wholeness gap. The President should take note of the discontinuity in the Navy’s presentation, and Congress should continue to exercise its authorizer and appropriator roles and initiate construction of more ships sooner rather than later.

Dr. Hendrix is a retired Navy Captain, former Proceedings author of the year, senior fellow at the Center for a New American Security, and principal with the Stoneridge Group, LLC.