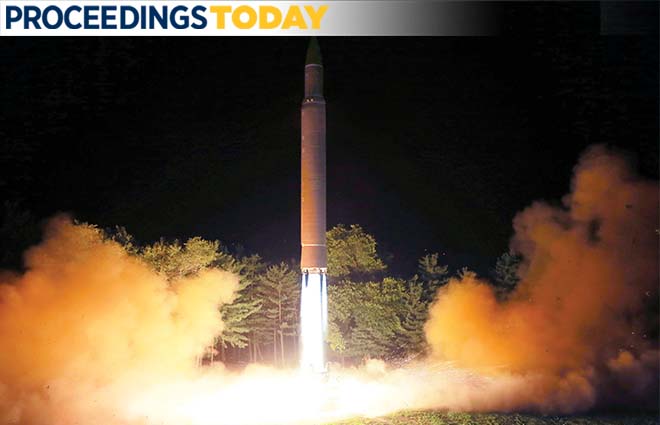 Countering Pyongyang’s threat requires a shift in strategy from an exclusive reliance on midcourse intercept for homeland defense to the fielding of boost-phase intercept capabilities as a part of the nation’s layered missile defense. The U.S. Navy is most able to deliver such a capability in the near future.

The combination of concerns over North Korea’s continuing missile program and recent aggressive behavior has made the country one of the United States' prime national security threats. North Korea conducted five nuclear tests between 2006 and 2016, launched satellites into orbit in December 2012 and February 2016, and expanded its missile tests under Kim Jong-Un.

Recent test developments indicate North Korea is making rapid progress to field a credible and effective ICBM capability. An April 2016 test of the submarine-launched KN-11, progress on the intermediate-range Hwasong-10, test flights of the KN-08, and the 4 July and 28 July Hwasong-14 launches highlight advances in underlying ballistic missile technologies.[i] The 28 July test of the Hwasong-14 demonstrated the kinematic capability to achieve 6,700 kilometers in range. Such a missile could strike Alaska and Hawaii.[ii] Press reports have suggested North Korea may have miniaturized a nuclear warhead, but such claims have yet to be acknowledged by the U.S. government.[iii]

Boost-phase intercept (BPI) technology can provide an increase in the capabilities of the present U.S. Ballistic Missile Defense System, especially in the context of the North Korean threat. BPI is attractive for several reasons, but is constrained by the attacking missile’s burn time and the speed of the interceptor.[iv] The principal advantage of BPI is its ability to alleviate the need to perform midcourse discrimination.

A boosting ballistic missile presents a large target with a bright signature, making detection and engagement easier. Since countermeasures generally are not deployed during the boost phase, the missile presents a single target for engagement.[v],[vi] The ability to avoid discrimination that all mid-course intercepts require is particularly valuable. According to a 1999 National Intelligence Estimate, countries with the capability of building long-range missiles also have the capability to build countermeasures to defeat such discrimination.[vii]

Boost presents different challenges to an intercepting system. Because of the short duration of threat missile boost—no more than five minutes for most missiles, and as short as three minutes for faster-burning solid-propellant threats—the engagement timeline for BPI is short. Further, the missile defense system must be in range of the threat trajectory at the time of launch. Effective targeting requires continual observation of the adversary’s missile systems, and the kill vehicle must be able to withstand the physical stresses associated with engaging a rapidly accelerating missile. Together, these complications constrain boost-phase systems to specific geographic conditions. Smaller adversary countries enable BPI, as interceptors can maintain station closer to potential launch sites within the country. Features such as allied countries or open water for basing interceptors nearby also enhance boost-phase opportunities. A BPI system based on existing or near-term naval capabilities could provide defense against intermediate- and intercontinental-range ballistic missiles under the correct geographic conditions.

Such conditions exist surrounding the Korean peninsula.[viii] Improving the U.S. Navy Aegis missile defense capability against intermediate-range ballistic missiles and developing an airborne BPI system could provide the United States with an improved ability to defend assets in theater while simultaneously providing a homeland defense capability against North Korean ICBM threats. The sooner the United States invests in this capability the better.

Part Two of this series lays out the technical opportunities and challenges to fielding a Navy boost phase capability.

Lieutenant Lacinski graduated from the U.S. Naval Academy in 2015. Following commissioning, he completed a two-year program at the Massachusetts Institute of Technology, earning a master of science in technology and policy. He currently is stationed in Pensacola, Florida, where he is beginning flight training as a Navy pilot.