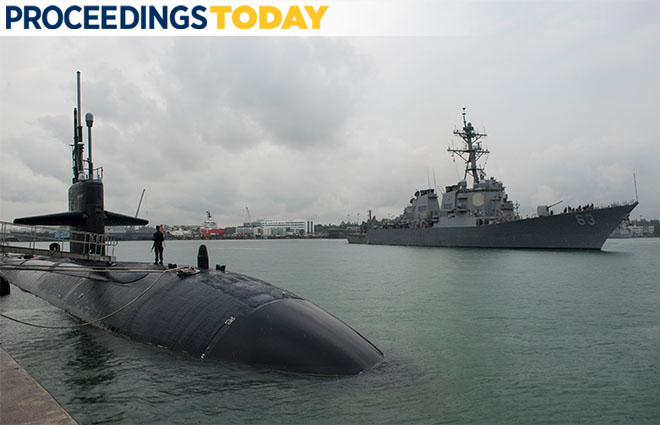 The recent collisions of two Navy Aegis guided-missile destroyers were not random, chance events. These were not torpedo attacks inflicted by an unseen enemy. The events were eminently avoidable, and thinking otherwise can kill a crew.

Almost all of my eight seagoing tours were conducted in the Seventh Fleet. I have transited in and out of Tokyo Wan and Sagami Wan dozens of times, have passed through the Straits of Malacca, and have tied up in Hong Kong and Singapore. I’ve operated out of the very shallow moorages of Fiji and Saipan, as well as deep-water ports like Guam and Subic Bay, up north to Busan and down south to Perth. My crews and I have operated surfaced and submerged in very shallow and congested waters using little more than passive sonar, a periscope, some basic fire-control systems, maybe a speedboat-style consumer-market Furuno radar while on the surface, the Mark One Mod Zero eyeball, and most important, our brains.

During my final active-duty assignment prior to retirement, however, I spent more time on surface ships than on submarines. And I observed many cultural differences in the way the surface ships are operated. These differences may have some bearing on the conditions that contributed to the unfortunate outcomes.

This is not to suggest that submarines operate perfectly, which of course they do not. But there is a level of conservatism inherent in submarine operations that, as a general rule, I did not observe in the operation of surface combatants. That is the cultural underpinning of certain paradoxes I intend to demonstrate here.

The first paradox has to do with an ethos driven by the very nature of submarining. In a submarine, the presumption is that if a serious casualty occurs, the entire crew will be lost. Although there is no such thing as an acceptable number of deaths on any ship, in a submarine everyone knows that a serious mistake by anyone means the death of all. This induces a certain level of gravitas that I did not usually sense when embarked in surface combatants. The paradox, then, is that because surface crews may believe they are in less actual physical danger than do submarine crews, they may be more likely to act in ways that induce higher levels of risk than do their submarine counterparts, who operate with the knowledge that they are only one major casualty away from catastrophe.

On submarines every member of the crew, regardless of seniority level, is allowed to—is expected to—“call out” any other crewmember, up to and including the captain, any time he or she feels that something is wrong. Yes, a seaman apprentice is expected to correct the captain if he or she sees something wrong. If every crewmember is going to die in a serious casualty, then everyone is responsible for keeping it from happening.

In their bearing and demeanor in the presence of the commanding officer (CO), surface crewmembers are very, for lack of a better expression, military in behavior. In contrast, submarine crewmembers tend to be substantially more informal—some might even say too informal, even within earshot of the CO. In matters of watchstanding and other areas where formality really does count, however, submarine crews are much more formal. This includes watch turnovers, watchstanding qualifications, readiness, discipline, and more.

Paradox number four is that submarines are thought of as high tech (and they are), but surface crews seem to rely on the technology far more than submarine crews do. Even junior sonarmen, fire-control technicians, and navigation technicians on submarines are taught to think through relative motion problems using mental methods, with the presumption that they always have to ask themselves if the situation presented by the machines actually makes sense.  Similarly, submarine officers are still trained to solve “approach and attack” relative motion problems in their heads while looking through the periscope, just as was done during World War II. The premise is that the machines will fail at the worst possible moment, and therefore you must first use your brain. This fundamental understanding of relative motion is constantly drilled into submariners and produces substantial benefits in matters of navigational safety as well as attacks.

In contrast, on surface ships with systems such as three-dimensional antiair radars, the mental test of whether what the machine says actually makes sense cannot usually be applied. Sometimes, rather than having an appropriately questioning attitude, there seems to be a willingness to simply believe what the machine tells you, even with simple systems like sonars and surface search radars, where it might otherwise be possible to conduct mental quality checks.

Paradox five is that because surface combatants generally have multiple sensor systems observing the same physical event, they are data-rich. But because they are inundated by data, they are often information-poor and less able to process what all the data means. The great volume of it often gives them more confidence than they should have in their situational awareness. They therefore often have a confidence-to-reality mismatch that sometimes causes them to act in inappropriate ways.

In contrast, on submarines, it is normal that a given target is only held on a single sensor (sonar when submerged, and a relatively low-tech radar when surfaced). If lucky, a submariner might even hold the target visually on the surface or at periscope depth. That means the mental aspects of situational awareness are far more elemental on submarines, and conservative, almost worst-case assumptions were far more likely to be made.

Paradox six is that even the most advanced fast-attack submarines are ungainly, maneuvering hogs on the surface compared with sleek surface combatants, yet the surface crews often take longer to act. Submarines on the surface have such small radar signatures that merchant ships using radar may presume they are nothing more than very maneuverable small boats. As a result, merchant crews almost always act as if they believe the small-boat-looking-submarine can easily maneuver out of the way of the merchant, which is not normally possible for a 6,000-ton warship with very little freeboard. Because of that, submariners must often presume that the maneuvering burden is on them, regardless of what the rules of the road prescribe. We train to maneuver early to avoid in-extremis situations.

In contrast, surface combatant crews often believe their ships’ exceptional maneuverability will get them out of trouble, and as a result they sometimes wait longer than is prudent to execute avoidance maneuvers.

The seventh and final paradox was revealed to me in 1994, when, as a submarine executive officer, I conducted a study of how to improve mariner skills. I found that the mindset required for being a good mariner is often in conflict with what is needed for being a good warrior, and this holds just as true in submarines as it does in surface ships. Aviators understand this:  junior officers are first expected to learn how to fly their planes competently while developing good “air sense,” long before they ever have to worry about fighting the plane. This is why I have recommended since the mid-1990s that mariner training be separated from ship combat training. Tactical qualifications should be delayed until officers prove themselves as competent shiphandlers and developed good “sea sense.”

It is often said that culture will trump strategy any day of the week. The lesson of these paradoxes is that culture also can trump technology.

I don’t know if any of these factors were at play in recent crises. I do know they may be contributing factors that should be examined.