Skip to main content
The USS George Washington (CVN-73) and her embarked carrier air wing (CVW-5) transit the Pacific Ocean in August en route to a hull-swap with the USS Ronald Reagan (CVN-76). “The carrier is a strategic, tactical, and diplomatic tool. . . .” the author notes. “We cannot do without them in war or peace.”
U.S. Navy (Chris Cavagnaro)

Now Hear this - Demise of the Aircraft Carrier? Hardly

Who’s afraid of the big bad wolf? “Not I, roared the lion, for I am the king of the jungle”—just as U.S. aircraft carriers are the kings of the sea.

Many authors of articles and opinions on anti-access/area denial (A2/AD) seem to be phobic over what they believe to be a devastating threat. And then there are those anti-big-deck-ship zealots who believe that A2/AD will negate the strategic value of the aircraft carrier altogether. I say, “Not so fast!”

No weapon or weapon system can be programmed to strike a specific ship or even a type of ship. A weapon can be programmed to strike a certain-sized target based on radar or sensor input—maybe even one with a video capability that can sense the shape of a target. That would be close to being able to attack an aircraft carrier. However, countermeasures can negate this type of sensor.

An enemy employing A2/AD must first locate the target. Then it must penetrate an extensive defensive layer to strike with sufficient force to disable the ship. American technology is as good at destroying incoming weapons as others are at making them. The 1969 accident on the USS Enterprise (CVAN-65) and on the USS Nimitz (CVN-68) in 1981 testify to the sustainability/survivability inherent in modern aircraft-carrier design and manufacture. In both of those instances recovery time from severe explosions and extensive fire was measured in hours, not days.

Finding a carrier is not easy. Yes, it is a big ship. But a lot of big ships are plying the world’s oceans. And many are much bigger than a U.S. carrier. Using imaginative lighting and some other deceptive tactics can make a carrier look like a super tanker or large container ship.

There are many examples of hiding an aircraft carrier from prying eyes. When the Nimitz launched helicopters for the ill-fated 1980 hostage rescue effort in Iran, neither the Russians, who were shadowing the Nimitz, nor the Iranians, who were kept informed by the Russians, knew where the carrier was. Through conditioning and the stealth of electronic silence, the Nimitz became invisible.

Other tactics have been employed successfully to make an attacking force believe that a missile ship was a carrier. Imagine the surprise when incoming aircraft or missiles are met by Aegis-launched Standard Missiles and not carrier aircraft.

Submarines pose the greatest risk of detection for carriers. If a submarine is attacking a carrier, defenses are available in addition to the hull structure, which is itself a great defense against torpedoes. However, the submarine still poses a significant threat, one that may well be more dangerous than A2/AD. If the submarine is reporting the carrier’s location, then electronic intelligence will hopefully provide a warning, and evasion tactics can be employed. The best defense against a subsurface threat is a friendly submarine followed by sophisticated antisubmarine-warfare ships that escort the carrier.

Defenses against any incoming missile or aircraft are numerous and very capable. The defense in depth of the carrier strike group still has to be overcome, starting with fighter aircraft at the outer edge of the defended area on combat-air-patrol stations. Next are the lethal Aegis ships using coordinated tactics to track and destroy the incoming attackers. These shooters are all coordinated through the airborne-early-warning capability provided by the Air Force or carrier-based E-2 aircraft. Close-in weapon systems on the carrier and in nearby escorts provide another obstacle for the incoming threat if it survives the outer defenses. Not many—if any—will.

Finally, the inherent survivability of the carrier means the weapon must be nuclear or a weapon of mass destruction to ensure target kill. Conventional weapons will cause damage but in most cases not significant enough to put the carrier out of business.

Aircraft carriers are very visible little pieces of America. They have provided lifesaving and humanitarian service during natural disasters. Carrier sailors have built schools, repaired needed institutions, and even helped educate children of other countries. The carrier is a strategic, tactical, and diplomatic tool. Those floating cities build friendships all over the littorals of this planet, thus enhancing the image of the United States. We cannot do without them in war or peace.

Admiral Macke is a naval aviator and a 1960 graduate of the U.S. Naval Academy. He retired from the Navy in 1996 as commander-in-chief, Pacific Command. 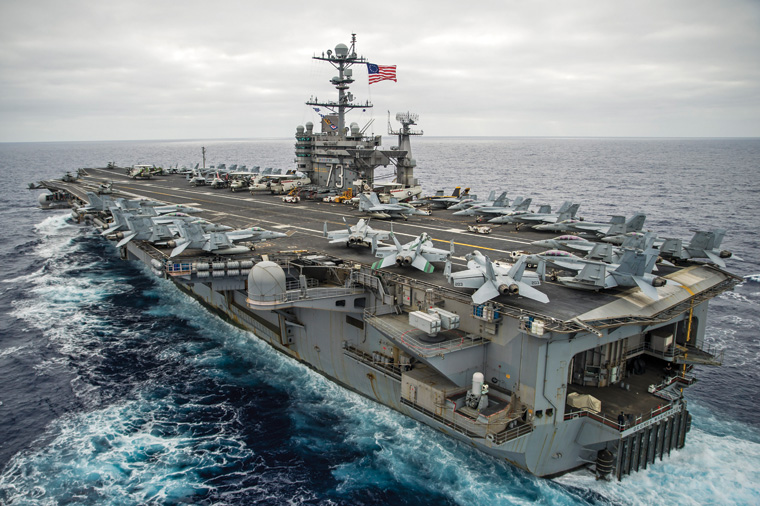 The USS George Washington (CVN-73) and her embarked carrier air wing (CVW-5) transit the Pacific Ocean in August en route to a hull-swap with the USS Ronald Reagan (CVN-76). “The carrier is a strategic, tactical, and diplomatic tool. . . .” the author notes. “We cannot do without them in war or peace.”
U.S. Navy (Chris Cavagnaro)