Skip to main content
Captain Karl Thomas of the USS Carl Vinson (CVN-70) serves dinner to his sailors on Thanksgiving 2014. “The senior acting as a servant to subordinates” is a morale-boosting trait of a strong leader. “If we truly value the concept of servant leadership,” notes the author, “we must live it.”
U.S. Navy (Nick Brown)

From the Deckplates - A Sense of Privilege or Service?

A recent conversation with a shipmate included a discussion of privilege and service. Service is the ideal that as we rise in rank, we have the responsibility to use privileges to serve others.

A sense of privilege is taking advantage of those situations only for personal benefit.

Servant leadership has become a popular concept, but it is as old as history itself. Unfortunately, failure to understand its origins leads to a belief it is just another in a series of throwaway catch phrases. It is not. It is the essence of leadership. Quite simply, it is a belief in follower-centered leadership, the senior acting as a servant to subordinates.

Those words may throw people off. Traditional definitions might wrongly lead some to believe servant leadership means doing for subordinates what they should do for themselves or handing them easy answers when tough lessons are needed. We must think of it differently.

Servant leadership is a focus on making conditions better for subordinates, not necessarily easier. It is doing for others what they deserve but cannot do for themselves. It is a focus on serving followers’ needs, not selfish desires. Leaders must dedicate time to their legitimate needs like personal growth, family, and education, but they must avoid selfish desires like power, money, and privilege. Leaders who do the right thing will be appropriately rewarded anyway.

As the conversation with my shipmate ended, a random situation illustrated exactly what we were discussing. Taking a break outdoors, we ran into a senior first-class petty officer who said he was bored. It was lunchtime and the Internet was down, so he spent his time building paper airplanes. This is as good a time-waster as any, I suppose, but I mentioned if he was bored, he could grab a screwdriver and remove weeds from the cracks in the concrete. I pointed out that the sailors he assigned to this very task earlier in the day had missed some spots.

He asked me why he should do that. “I have people for that,” he said. In response, I asked him why he would assign a subordinate a task he was not willing to do himself. He responded with a question delivered in such a way as to say, “Gotcha.” He asked, “As a senior chief, were you willing carry out every order you gave someone else?” “Of course,” I responded. “Go clean the toilet?” he asked. “Yes, I clean them at home; I can do it at work.”

I don’t suggest that the sailor is necessarily a poor leader or I any better, but he could learn a little about service (what is good enough for your people is good enough for you) and focus less on privilege (“I have people for that”). He is not alone. These lessons seem to escape many leaders, and many of the high-profile personal failings we see are rooted in a sense of privilege or entitlement. This mindset breeds arrogance and a sense of being above the law. Followers learn and emulate these traits, creating future leaders that continue the cycle.

A focus on servant leadership might break this cycle of entitlement, but too often the military turns valid concepts into meaningless catch phrases because leaders fail to fully understand the concept and enforce its practice. Random statements do no good. It must be believed and implemented so followers accept it, feel it, and employ it. If it becomes just another passing fad, it will be as useless in practice as many other programs we so often see halfheartedly supported.

Rank does have its privileges, but also its responsibilities. Effective leaders focus on the latter. They concentrate on using their privilege to serve others. Those who focus on privilege demand respect, but they are rewarded only with the outward appearance of it. Conversely, those who use their privilege in the service of others will reap true respect.

Servant leaders embrace these words, stolen from an Internet meme posted by another shipmate: “I don’t want to be better than other people. I just want to help others be better people.”

If we truly value the concept of servant leadership, we must live it. If we want future generations of leaders to learn that the beauty of privilege is using it for the benefit of others, we must make it part of our culture.

Senior Chief Murphy retired from the Navy after 21 years of service. His June 2012 Proceedings column, “Bring Back Humility,” was included in the recently published Naval Leadership, a volume in the U.S. Naval Institute Wheel Book series. 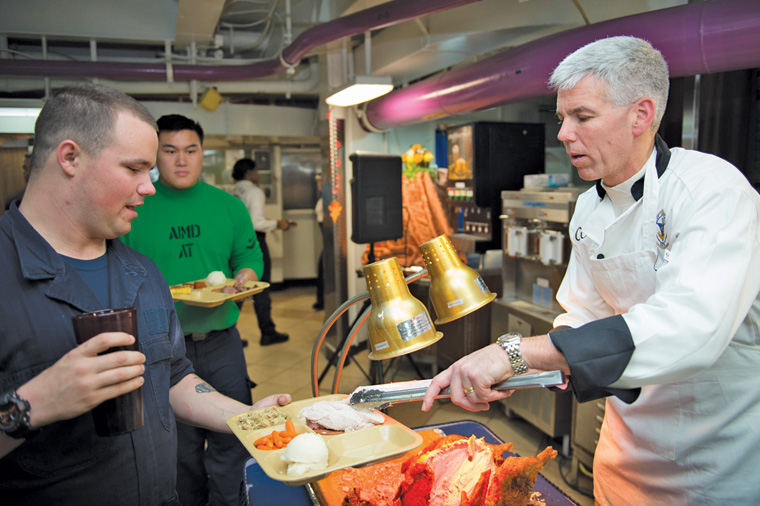 Captain Karl Thomas of the USS Carl Vinson (CVN-70) serves dinner to his sailors on Thanksgiving 2014. “The senior acting as a servant to subordinates” is a morale-boosting trait of a strong leader. “If we truly value the concept of servant leadership,” notes the author, “we must live it.”
U.S. Navy (Nick Brown)