The first of seven Arleigh Burke Flight II-class guided-missile destroyers, the Mahan (DDG-72), conducted builder's trials on 24 July 1997. The Block II ships externally differ little from their 21 Block I sisters, the notable change being the vertical topmast to support the Adcock-type very-high-frequency direction-finding array that is part of their AN/SRS-1 Combat Direction-Finder System. Another change is the substitution of the larger antenna group of the AN/SLQ-32(V)3 electronic warfare system for the original AN/SLQ-32(V)2 array, which has been supplemented by Sidekick jammers on the earlier ships to bring their EW systems up to AN/SLQ-32(V)5 status. The Block II ships displace 9,033 tons full load, some 718 tons more than did the Arleigh Burke (DDG-51) when completed.

Visible at upper left of this July 1997 aerial view of the Royal New Zealand Navy base at Devonport, near Auckland, is the Leander-class frigate Canterbury, with a 20-mm Phalanx close-in weapon system atop her helicopter hangar; astern is New Zealand's first MEKO 200-class frigate, the Te Kalla, which was commissioned on 22 July. The 12,390-ton underway replenishment oiler Endeavour and 100-ton capacity floating crane Hikillui occupy the other side of the pier. On the other side of the basin are the frigate Waikato, now reduced to pier-side training duties and soon to be retired, and the 10,500-ton Charles Upham, a former commercial vehicle ferry undergoing conversion as a troop and vehicle transport. The white-painted survey ship Monowai, opposite the Charles Upham, is to be retired next spring on completion of modifications to the newly acquired Resolution (ex-U.S. Tenacious, T-AGOS-17) to replace her.

The U.S. Coast Guard's Kukui (WLB-203), the third of a planned 16 Juniper-classseagoing buoy tenders to be launched, takes to the water on 5 May 1997 at Marinette Marine Corporation, Wisconsin. Intended to replace the more than half-century old Balsam class, the 225-foot, 2,000-ton-full-load Kukui and her sisters can break ice up to 1-meter thick by ramming or 35-mm freshwater ice continuously at 3 knots. Crewed by 6 officers and 34 enlisted personnel, the Juniper-classships have an endurance of 45 days and a range of 6,000 nautical miles at 12 knots. To date, Marinette also has launched 4 of a planned 14 of the similar-looking, 840-ton, 178-foot-long Keeper-class coastal buoy tenders, all to be named for lighthouse keepers. 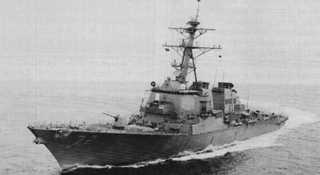 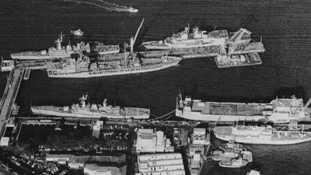