On 26 October 1962, at the height of the Cuban Missile Crisis, the U.S. Navy stopped and boarded the Lebanese-flagged freighter Marucla bound from Beirut to Havana. Three officers and a signalman from the USS Joseph P. Kennedy Jr. (DD-850) along with the executive officer of the John R. Pierce (DD-753) inspected the ship for more than two hours before recommending that the Kennedy clear the vessel to proceed. This was the only boarding during the Cuban blockade. The ship had been chosen specifically to demonstrate U.S. resolve to enforce the embargo. It may just have been coincidence that the lead ship in the exercise had been named for President John F. Kennedy’s elder brother. 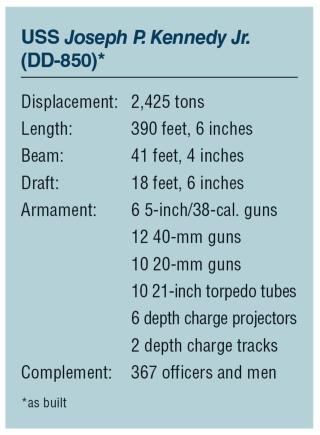 The ship’s namesake had been killed on 12 August 1944 when a PB4Y-1 Liberator he was piloting accidentally exploded. The aircraft had been fitted out as a drone missile to strike a German V-3 large-caliber gun site at Mimoyecques, France. Lieutenant Kennedy posthumously received the Navy Cross.

The destroyer was launched on 26 July 1945, less than a year after his death, at the Bethlehem Steel Company’s Fore River Shipyard in Quincy, Massachusetts, and commissioned at Boston on 15 December. She was one of 98 Gearing–class ships built from 1944 through early 1946.

With the war over, the new ship, homeported in Newport, Rhode Island, initially was relegated to Naval Reserve training until October 1946, when she made her first international cruise bound for Chile, Peru, and Venezuela through early December. During the training period, another brother of the namesake—the future U.S. Attorney General and New York Senator Robert F. Kennedy—served on board. In February 1947, she deployed to the Sixth Fleet in the Mediterranean, the first of 11 that she made there over her 28 years of Navy service. This was followed by additional training cruises until August 1949, when she returned to the Mediterranean as flagship of Destroyer Squadron 18.

That deployment was curtailed after six months because of the Korean War outbreak. After training for convoy and bombardment duties, she sailed westward for Japan by way of the Panama Canal on 3 January 1951 and arrived a month later to join Task Force 77 off Korea. There she screened for the aircraft carriers Valley Forge (CV-45), Princeton (CV-37), and Philippine Sea (CV-47) until 8 April. She then was dispatched to the Formosa Patrol to buttress forces against possible Communist Chinese aggression against the island republic. By 20 May, she was back in Korean waters off Wonsan, where her six 5-inch guns barely stopped firing during the bombardment of the city. She was released from combat duty on 13 June and transited westward with Destroyer Squadron 8 to complete a circumnavigation. She arrived in Newport on 8 August.

Her career included interesting and unusual assignments. In June 1959, she participated in the opening of the St. Lawrence Seaway in which both President Dwight D. Eisenhower and Queen Elizabeth II took part. This was followed by a freshwater cruise of the Great Lakes, including a port visit at Chicago. In January 1961, she visited Washington, D.C., for the inauguration of President Kennedy. Later that spring, she supported two test launches in the Project Mercury man-in-space program. 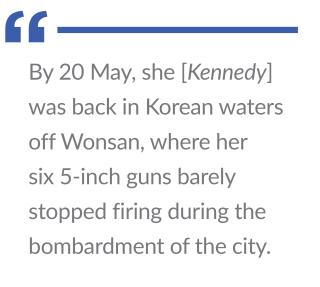 In July, she entered the New York Naval Shipyard for a near yearlong Fleet Rehabilitation and Modernization (FRAM) IB overhaul, which significantly changed her profile—and capabilities. The work rebuilt her superstructure and updated electronic, radar, and sonar systems as well as weapons. The second twin 5-inch gun mount was removed and replaced by a pair of triple Mk-32 torpedo tubes. An eight-cell Anti-Submarine Rocket (ASROC) box launcher was mounted aft of the fore funnel, and a hangar and landing pad for one QH-50C DASH antisubmarine warfare drone helicopter were aft of the second funnel.

After a post-refit shakedown cruise, she returned to Newport in September 1962 to host President Kennedy during that year’s America’s Cup races. After sailing to the Caribbean on 22 October for the Cuban crisis, she remained on patrol there until 7 December. She later assisted in the qualification trials of two Polaris missile submarines and, in late November 1965, sailed once again to aid NASA as part of the afloat recovery team for Gemini VI-A (15 December) and Gemini VII (18 December) after their orbital and rendezvous mission in space. A year later, she took part in the recovery operations of Gemini XII.

The Joseph P. Kennedy Jr. was stricken from the Naval Register of Ships in 1973 and acquired by the Battleship Cove Museum in Fall River, Massachusetts, in 1974, where she remains a museum ship and a National Historic Landmark. In early 2000, the destroyer portrayed herself and the John R. Pierce in the Kevin Costner film about the Cuban Missile Crisis, Thirteen Days.

By J. M. Caiella
The most mysterious and indeed mythical ship in the U.S. Navy never sailed and was never completed.
NH Historic Ships

By J. M. Caiella
The Recruit was to serve not only as a recruiting vehicle, but also as a training “ship” and a hands-on interface between the Navy and general public.
NH Historic Ships