I enjoyed the article “Bleak December,” which inspired a number of questions about what was not done that could have been done in those opening weeks of the Pacific war. Why wasn’t Lingayen Bay mined before 7 December 1941? This would have forced the Japanese to clear the bay first. This delay would have given our subs a chance to hit ships waiting outside the bay. As it was, hundreds of our naval mines, unused, had to be destroyed to keep them from falling into Japanese hands.

Why was Fort Wint abandoned? This fort covered Subic Bay. This bay should have been mined as well. A “forlorn hope” could have been left to fire on and tie down Japanese forces as long as possible. How do you sweep for mines when you’re under fire from the fort’s guns? Subic Bay is much closer to Bataan!

It is fortunate that the Imperial Japanese Army Air Service did not commit more planes to the close-air support role. The U.S. retreat into the Bataan Peninsula could have been easily turned into a bloody rout.

It was not just the U.S. submarine forces that had problems during the defense of the Philippines. More study should be done on both our defense of these islands and Japanese antisubmarine tactics.

Artist Behind the Artistry

I was drawn to the story in the December issue featuring aviation stamps (“Pieces of the Past”).  Readers may be interested to note that the art was provided by my longtime friend and fellow Oregonian William S. Phillips, who was selected to produce two batches of aviation stamps c. 1997 and 2005.

As described at the artist’s website, “The Smithsonian Institution’s National Air and Space Museum presented a one-man show of Phillips’ work in 1986. He is one of only a few artists to have been so honored. In 1988, Phillips was chosen to be a U.S. Navy combat artist. For his outstanding work, the artist was awarded the Navy’s Meritorious Public Service Award.”

Those who admired Mr. Phillips’ postage-stamp artistry can find out more about him at aviationarthangar.com/wisph1.html. 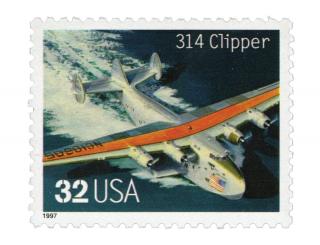 Ode to the Mighty ‘Clipper’

I have just finished the reading the December issue, a great one as usual. My attention was particularly captured by the article concerning U.S naval aviation celebrated in U.S. postage stamps over the years (“Pieces of the Past”).

What particularly caught my attention was the stamp with the Boeing Model 314 on it. I have long been fascinated by this aircraft, and I had always hoped to find somewhere that it may have been preserved. I was disappointed to read that all 12 had been scrapped after the war. But it was great to see another reference to the mighty “Clipper” again.

The transfer of the USS PC-467 to the Royal Norwegian Navy as King Haakon VII (“Historic Ships”) was not the only U.S. ship transfer to a European navy-in-exile. The United States also gave PC-class ships to the Dutch, Greek, and French navies.

The Royal Netherlands Navy commissioned the Queen Wilhelmina (former PC-468) on 6 August 1942 at the Washington Navy Yard. The ship was sent to the Caribbean for service under U.S. operational control, based at Curacao for most of 1942–44 on convoy escort duties. The Queen Wilhelmina left the Caribbean for Miami in October 1944 for a refit before sailing via Bermuda for Britain in February 1945.

After the Allied landings in French North Africa, French naval forces that served the Vichy government gradually changed their allegiance to the Allies. The French were very short of escort vessels for coastal convoys in West and North Africa and in 1943 requested 30 patrol craft from the United States. Thirty-two were transferred to the French Navy between March and November 1944 at various ports including Casablanca and Toulon.

The British transferred many new ships to the European navies, but there were limited numbers to spare until later in the war. The U.S. decision to transfer PCs and other types of warships was a helpful supplement to British support of the European allied navies and foreshadowed the postwar role of the United States as an important source of warships for NATO members.

It was great to see details of the U.S. Navy’s Mk IV 14-inch railway gun (“Our Highest Hope Was Gained”). Your readers might be interested in some back story on this World War I artillery.

As related in Benedict Crowell’s The Armies of Industry, part of the six-volume series How America Went to War (1921), the Army commenced a massive program to field 8- through 16-inch railway guns and howitzers. Even by contracting with the same manufacturers that produced the naval units and getting spare tubes from the Navy, they were not complete by the Armistice. The same thing happened to the rest of the Army designs. Those that reached Europe were shipped back, and many were canceled. After the war, the Navy turned over the gun cars and trains to the Army, yet by some miracle a surviving Mk IV is on display outside National Museum of the U.S. Navy in Washington, D.C.

Readers weigh in on topics from the Bay of Pigs to deployment to Adak, Alaska.