Skip to main content
November 1942: A British troop convoy beaches at Bougie, Algeria, marking the commencement of the Tunisian campaign. Meanwhile, German and Italian forces already are closing in on the Allies’ target destination.
public domain

On the heels of the Allied landings in Operation Torch, the rapid capture of Tunisia was the salient goal—but the Axis got there first. How did this happen? A lesson in the pitfalls of split command.
By Vincent P. O’Hara
Naval History Magazine
Featured Article
View Issue
Comments

Coming ashore successfully at all nine landings in French North Africa was a great relief to the Allies, but this was only Operation Torch’s first step. The goal remained the rapid capture of Tunisia. But the Axis got there first and built up its strength more quickly, despite needing to rely on vulnerable sea lanes. The Axis powers successfully disputed air superiority, at least in the campaign’s first month, but the factors that determined victory in the battle for Tunisia were urgency and risk. It was as if the Allies had used up their allotment of risk in Morocco and Algeria and had nothing left to spend in Tunisia—particularly at sea. The Allied failure to block Tunisia in the campaign’s first weeks was a naval failure of tremendous impact.

On 10 November 1942, the French and U.S. commanders in Algiers, Admiral François Darlan and Major General Mark Clark (he would be promoted to lieutenant general the following day) agreed to end the fighting in Algeria and Morocco. The next day, the Tunisian campaign got under way with a British brigade landing around Bougie, one quarter of the way to Tunis from Algiers. That same day, Germany invaded the Free Zone of France, and 14,000 Italians landed in Corsica. The last Axis forces retreated from Egypt ahead of the British 8th Army’s slow advance. It also was the day the first Italian transports departed Palermo bound for Tunisia.

On 11 November, the Allied Expeditionary Force’s naval commander, Admiral Andrew Cunningham, received a message from a fellow admiral extending “warmest congratulations on the phenomenal success achieved in reaching the objectives, with comparatively no losses.”1 With Tunisia still in play, it was early for such congratulations, which reflected the widespread relief that the actual landings had succeeded. But coming ashore was only the first step. Operation Torch’s goal was the complete conquest of French North Africa, and that included Tunisia.

From the beginning, the Allies realized they needed to capture Tunisia’s harbors before Axis forces could cross the narrow Strait of Sicily in force. The Allied High Command had rejected a direct landing there on 8 November because it was too exposed to air attack. Instead, the final Torch plan assigned the easternmost assault in Africa to Algiers, 500 miles from Tunis. Follow-up landings were scheduled for Bougie and Bône, with air drops at Bizerte and Tunis itself after that. The major effort, however, was to be an overland advance from Bougie and Algiers, a movement the planners calculated would take two weeks. They estimated the enemy would require ten weeks to field a full-strength division in Tunisia. So it seemed there was time enough to secure the objective before the end of November.

In the event, the first German troops deplaned in Tunisia on 9 November, and on 12 November the first Italian cargo ships unloaded 1,000 men and 1,800 tons of equipment and supplies in Bizerte. Over the next two and a half weeks the Italians delivered by sea 17,000 men, 34,339 tons of supplies, and more than 2,200 vehicles and 700 tanks in 42 hulls and 25 convoys.2

The alacrity of the Axis response caught the Allies flat-footed. The Axis powers built up their forces and pushed forward faster than the British, with the first clash occurring 50 miles west of Bizerte on 17 November. By 28 November, the British had fought their way to within a dozen miles of Tunis, but Axis tanks, literally driving straight from the docks, stopped their advance there and forced the British back. Stalemate followed, and Tunisia did not fall until May 1943—nearly six months later.

‘We Are Not Moving Fast Enough’

How did this happen? Admiral Cunningham, past victor of Taranto and Matapan and future First Sea Lord, had a reputation for aggressiveness, and as early as 12 November he seemed aware of a problem when he wrote: “We are not moving fast enough. Tunis is anybody’s who cares to walk in but the Huns are beating us in the race. I cannot understand why our soldiers do not embus and get on but they are methodically piling up OPL, and amm[unition] and really haven’t got going yet.”3 This suggests that Cunningham saw the capture of Tunisia as a military rather than a naval problem, and, in some respects, it was, but Axis equipment, supplies, and most of the men had to arrive by sea, and that was a naval problem.

Cunningham did not lack for resources to address this problem. By 15 November, Force H consisted of two battleships (HMS Nelson and Rodney), two carriers (HMS Furious and Formidable), several light cruisers, and a dozen destroyers This was in addition to another five smaller carriers, five light cruisers, and at least 12 more destroyers from the Eastern and Central Task Forces largely freed from support duties by the 10 November ceasefire.

Force H, however, spent six weeks intimidating the Spanish, French, and Italian fleets by cruising between Gibraltar and Oran. Meanwhile, what the Italian naval command feared most was the use of battleships and carriers against their traffic.4 But thankfully, from their point of view, Cunningham never considered ordering the battleships to bombard Bizerte or Palermo as he had Tripoli a year and a half before, or ordering a carrier strike in the face of enemy air superiority. The last time he did that, it had put the Formidable into the docks for five months. Nor did he set up a surface strike force using more expendable cruisers and destroyers, believing that Bône, the closest available base, was too exposed to air attack. 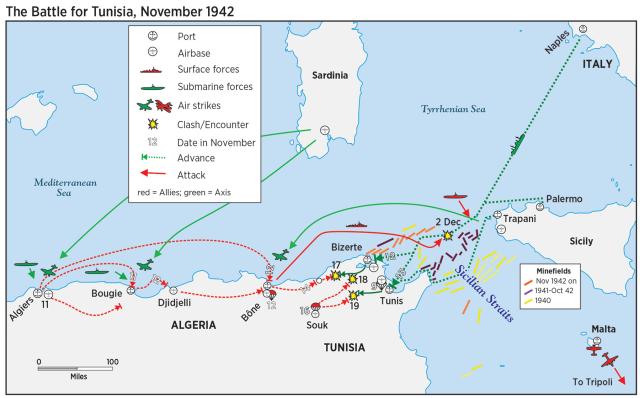 In the Mediterranean, the Axis had 1.7 million tons of suitable shipping available in 465 hulls, but these vessels also needed to sustain armies in the Balkans, ship oil from the Black Sea, and handle routine coastal traffic.5 In the subsequent campaign to supply Tunisia, along what the Italians named la rotta della morte (the Route of Death), the Axis forces used 610,000 gross register tonnage of shipping in 175 hulls grossing more than 500 tons. Of these, they lost 85. Italy’s Regia Marina had six battleships, seven cruisers, and 25 destroyers. What the fleet lacked was fuel oil, and this, along with the limited range of its destroyers, reduced its ability to intervene against Operation Torch.

Nonetheless, the Italian command did transfer three light cruisers and three destroyers to Messina, joining two heavy cruisers there. On 12 November, the three modern battleships with ten destroyers transferred from Taranto to Naples, joining three more light cruisers there. Thus, should the fuel become available (from hidden stocks or sudden German grants), the fleet could sortie.6

The British initially attacked traffic to Tunisia with submarines. Signals intelligence allowed the seven submarines available to take good positions along the sea lanes into Tunisia. Italian records mention submarine attacks on 13, 16, 17, 18, 20, 22, 23, 25, and 29 November. These were all without result. Aircraft made another six attacks but also failed to score except for strafing damage. The reasons for the poor performance cited in British histories included heavily mined waters, difficulties of navigation, the fact that days were getting shorter, and poor weather.7 British advantages such as radar and Ultra intelligence were offset partially by the fact that the that Italian convoys were heavily defended, had to cover short distances, and generally transited at night. From Naples, it was a crossing of 45 hours at 8 knots, or 24 hours at 15. From Trapani in Sicily, those times were 22 hours and 12 hours, respectively. Convoys were timed, insofar as possible, to depart at dusk and arrive at dawn.

The Allied staffs charged with planning Torch and Supercharge, the British 8th Army’s offensive, did not coordinate their efforts. This was a natural consequence of split command. Tunisia was fracture line between the Levant Fleet based at Alexandria, Egypt, under the command of Admiral Harold (“Harry”) Harwood and a new Mediterranean Fleet headquartered in Gibraltar under Cunningham. Malta, the British base closest to the Axis shipping lanes, fell under Harwood’s jurisdiction. The island still was under siege, and, with limited amounts of aviation fuel and ammunition, its air and subsurface forces could focus on only one objective. The Middle Eastern Command—worried about Lieutenant General Erwin Rommel of Germany’s Afrika Korps making a stand—considered traffic into Tripoli more important than traffic into Bizerte, and it directed air and naval actions accordingly.

The waters under dispute were dangerous and heavily mined by both Axis and British forces. Italy gave most convoys strong escorts, and most had air coverage during the day. These difficulties explain, in part, why the attacks conducted were ineffective, but they do not explain the small scale of the attacks or the failure to devote more air and naval forces to the job. Clearly the problem was not incompetence, a lack of foresight, or insufficient resources. It seems the Allied high command did not correctly assess the situation’s urgency; moreover, it was slow in appreciating that the capture of Tunisia was a naval problem, not a military problem.

In the planning documents for Torch there is a sense that Tunisia was there to be taken. The need to do this promptly was stated, but in the event, ground forces did not advance with the urgency or strength the situation required. Torch planning did not anticipate encountering so many enemy troops so soon on the road to Tunis. And even then, the Allies nearly succeeded, driving to within a dozen miles of the city. The margins were very fine. This suggests that had the British sunk or even delayed a few of the 42 ships that arrived in Tunisia, the Axis bridgehead might have fallen—and Rommel would have been trapped like a rat.

It was a time—a crisis, in fact—when the Allies needed to read the situation and to pivot. In the west, the massive naval forces under Cunningham’s command needed to establish the threat of a surface strike force in the short sea lanes between Sicily and Tunisia. In the east, Malta-based aerial strike forces needed to redirect their efforts away from Tripoli and toward Tunisia.

Cunningham designated a strike force of three light cruisers and three destroyers on 26 November. It took station at Bône, and on the night of 2 December it fell upon a large and strongly escorted Italian convoy and slaughtered it. Thus began the bitter campaign to supply Tunisia—but it was already too late to secure victory. The damage already had been done.

7. This is based on the accounts in Figravanzo, 137–40, and Arthur Hezlit, British and Allied Submarine Operations in World War II (Portsmouth, UK: Royal Navy Submarine Museum, n.d.), Chapter 16.

Mr. O’Hara is an independent scholar and the author or coauthor of 12 books, including Torch: North Africa and the Allied Path to Victory (Naval Institute Press, 2015) and Six Victories: North Africa, Malta, and the Mediterranean Convoy War, November 1941–March 1942 (Naval Institute Press, 2019). His articles have appeared in Naval History, Naval War College Review, MHQ, and other publications.

By Vincent P. O’Hara and Stephen McLaughlin
The Red Navy entered World War II as an underdog, yet it proved vital to the Soviet Union’s triumph.