Naval Guns, Inside and Out

In its most basic form, a gun consists of a barrel (tube), closed at one end, from which a projectile (bullet) is propelled by the rapid burning of a propellant (gunpowder). A projectile fired from a gun gets all of its traveling energy at the instant it is fired (unlike rockets and missiles, whose burning fuels continue to propel them through the air).

In years past, guns such as the 8-inch/55 and the 16-inch/50 were the main armament of large cruisers and battleships. Today, the most prevalent guns in the Navy are the 5-inch/62 (on cruisers and destroyers) and a specialized close-in weapon system (CIWS) known as the 20-mm/76 Phalanx system, which is mounted on many ships as a protection against incoming missile attacks and localized surface attacks. High-caliber machine guns often are used for close-in defense, and many Navy ships also carry saluting guns, which are used for ceremonial purposes and have no combat capability.

It was not until oared galleys were replaced by vessels propelled by sail that guns became a major component of a ship’s armament. With the oars removed, there was room to place rows of cannon along the ship’s sides. Guns were first placed on the main deck, but gun ports were later cut into the sides of the hull, allowing the placement of guns on board one or more decks below the main. With room for only a few guns on the forward or after part of a ship, most of the guns were placed along the broad side. This led to the term broadside, describing the firing of all guns along one side of the ship. This also led to the development of the tactic known as crossing the T, where one ship is able to successfully maneuver so as to bring her broadside across the bow or stern of an opponent, thus bringing many more guns to bear. 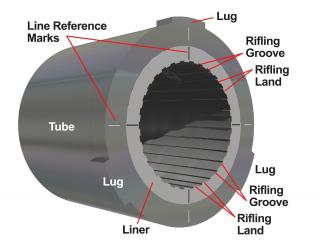 Early cannons had smooth bores (inside the barrel) and usually fired round shot. Modern guns have rifling in their barrels, which is a network of ridges (called lands) and grooves shaped in a spiral that causes an elongated projectile to spin on its long axis (much as a well-thrown football), significantly increasing the range and accuracy of the gun.

Projectiles carry out the tactical purpose of the weapon and consist of the base, the body (main part of the projectile; slightly smaller in diameter than the bourrelet), the ogive (curved forward portion of a projectile), the bourrelet (smooth machined area that serves as the bearing surface of the projectile during its travel through the bore of the gun), and the rotating band (circular ring made of copper or plastic that seals the gun chamber to prevent the escape of propellant gases and engages the rifling in the bore to impart rotation to the projectile).

There are and have been many types of projectiles used in naval guns. High-capacity (HC) projectiles were designed for use against unarmored surface targets, shore installations, and personnel, while armor-piercing (AP) projectiles included special delayed fuzes that allowed them to first penetrate armor before detonating. Other specialized projectiles include illumination rounds that shed light in nighttime scenarios by lofting parachute-equipped flares into the night sky, antiaircraft common (AAC) projectiles designed to spread clouds of shrapnel among enemy aircraft, chemical, variable-timed fuze, and dummy rounds for drill purposes.

Guns are not nearly as important to naval ships as they once were—sophisticated missile systems, with their greater range and superior accuracy, have taken the place of the gun as the mainstay of naval armament. Missiles tend to be much more expensive, however, and certain missions remain better performed by guns.