Skip to main content
Benjanmin Stoddert was the first U.S. Secretary of the Navy, serving under President John Adams from 1 May 1798 to 31 March 1801. Civilian control of the military is one of the governing principles of the United States.
Naval History and Heritage Command 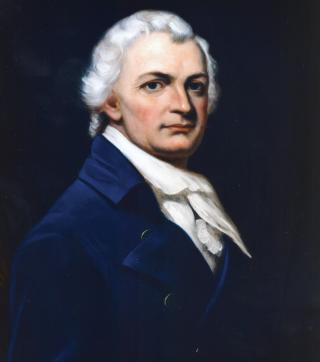 On 30 April 1798, President John Adams signed “a bill to establish an Executive department, to be denominated the Department of the Navy . . . the chief officer of which shall be called the Secretary of the Navy, whose duty it shall be to execute such orders as he shall receive from the President of the United States.” This new Secretary would be “hereby authorized and empowered . . . to take possession of all the records, books, and documents . . . pertaining to this department, which are now deposited in the office of the Secretary of War.”

Thus, the Navy, as its own discrete departmental entity, was born. And from a handful of frigates and bare-bones staff structure would evolve the most powerful fleet the world has ever known. In terms not only of size, but also organizational complexity, it is a far cry from that nascent force of first Navy Secretary Benjamin Stoddert’s day.

One might think that structuring a navy organization would be relatively simple: that ships would be organized into fleets to operate in certain waters of the world and that admirals would command those fleets; that a chain of command could be drawn from the commanding officers of ships to the commanders of fleets and, ultimately, to the senior-most admiral in charge of the whole navy. But this simplistic vision ignores the reality that there are a number of chains of command that must be understood if one is going to understand how the U.S. Navy is organized.

To begin with, the Navy consists of more than ships. There are aircraft, submarines, SEALs, Seabees, Marines, Cyber Protection Teams, and more that make up what can collectively be described as the operating forces of the Navy. Sometimes you will hear the operating forces referred to as simply the fleet.

Further, these operating forces cannot function independently. Some means of supplying and repairing them must be in place, and medical facilities must be available to care for casualties and the sick. These and other considerations require facilities ashore to provide such support, often referred to collectively as the shore establishment.

Because the United States is a democracy, one of its governing principles is civilian control of the military, meaning that sometimes there are civilians in military chains of command, such as the President of the United States (who is Commander-in-Chief of the armed forces) and the Secretary of the Navy.

A given unit (ship, squadron, etc.) is likely to be part of two separate (but sometimes overlapping) chains of command simultaneously: administrative and operational.

The administrative chain of command is what keeps the Navy functioning on a day-to-day basis, so units are ready to execute operational tasks when assigned. Less colorful, but essential, it consists of elements of preparedness, such as training, repairs, supply, human resource management, intelligence support, communication facilities, weather prediction, and medical treatment.

The operational chain of command controls forces (ships, aircraft, etc.) that are assigned to combat operations, operational readiness exercises, humanitarian relief missions, evacuations, etc., or are on-station carrying out missions such as sea control and deterrence.

Some individuals in this organizational structure may “wear two hats,” an expression meaning one person can have more than one job, and often those two (or more) jobs might be in different parts of the organizations described. For example, the commander of the Navy’s Fifth Fleet might also hold the position of Commander of U.S. Naval Forces, Central Command (a joint command position within the Department of Defense chain of command).

The Chief of Naval Operations wears a number of hats in that he or she is responsible for ensuring the readiness of the Navy’s operating forces, but also is the head of the shore establishment. And while this admiral is the most senior military officer in the Navy, he or she also works directly for the Secretary of the Navy and serves as a member of the Joint Chiefs of Staff.

The Reliability of Sound-Powered Phone Systems