Praise from Above: The American Tradition of the Military Flyover

The Navy Blue Angels and Air Force Thunderbirds aerial performance teams undertook an impressive joint flyover program in April, honoring frontline workers and first responders during the COVID-19 pandemic. Combined with National Guard flyovers, more than 100 sorties stretched across the United States in more than 40 states, soaring above communities that are not often treated to these displays of military technology and aerial precision. This new exposure to a 100-year-old tradition raised questions of how flyovers began, why they continue, and what a flyover symbolizes today.

It is not very often that the same display would be appropriate at a football game or a funeral, but the flyover—a defined formation of aircraft passing over a gathering—pertains to both in practice and heritage. Most present-day flyovers are relatively simple affairs with fewer than six aircraft performing a routine that any flying unit might execute after a few hours of training.

Flyovers have their origin in World War I. The first combat aviators passed over battlefields after an engagement to let those on the ground count planes to learn if their mission was successful or if friendly aviators were lost. During some of these flyovers, a wreath was dropped on the site where a fellow airman went down.

This is the antecedent of the “missing man” formation. By 1931, this practice was established enough to be noted in newspapers, though it looked different than the today’s “finger four” formation, which was developed during World War II. When Army Air Corps chief Major General Oscar Westover was buried at Arlington Cemetery in 1938, the flyover featured a formation of at least 60 fighters and bombers with a “blank column.” When Air Force General Hoyt Vandenberg was buried in 1954, the usual artillery caisson was replaced by six B-47 Stratojets flying overhead with a gap in their formation representing the deceased aviator, followed by 16 F-84 Thunderjets and 16 F-86 Sabres.

Using flyovers to connect with the public by creating a sense of safety or awe developed  concurrently with funerary honors. Perhaps the first military flyover was at Game One of the 1918 World Series at Comiskey Park in Chicago, where the gathered crowds were witness to a procession of more than 60 aircraft as well as the shutout pitching of Babe Ruth. Flyovers at sporting events became an occasional treat, but demand for the displays exploded after 11 September 2001. Because of the high demand, flyovers now have a more rigorous screening process.

Most flyovers are performed by aviation units as part of their normal training to maintain currency and competency and come at no additional expense. For a few units, however, the demonstration flying is the entire point. Naval aviation developed expertise in landing on ships, launching aerial torpedoes, and flying long distance—all activates that took place outside the public eye. Admiral Chester Nimitz, concerned that naval aviation would fall from view after World War II, ordered the creation of a flight exhibition team to maintain public awareness. The new team, flying F6F Hellcat fighters, performed for the first time on 25 August 1946. An announcer called them “Blue Angels,” the name of a night club he had read about in The New Yorker. The name stuck, and so did the performance team. The Air Force followed suit in 1953 with the Thunderbirds. Other teams have popped up over the years to showcase the maneuverability of specific air frames, such as the F-22 Raptor demonstration team.

While the COVID-19 flyovers were outside of the pattern of flyovers for funerals, sports, or equipment demonstrations, this kind of display is far from unprecedented. The Challenger and Columbia space shuttle disasters both rated flyovers. In 1999, Air Force aircraft flew over a Texas A&M football game to mourn students killed when a bonfire collapsed. After the 1999 shooting at Columbine High School in Colorado, the Air Force honored the student victims with a flyby. The Navy honored former naval aviator President George H. W. Bush with an unprecedented 21-aircraft missing man flyover at his interment in 2018.

At its deepest level, air power is an indicator of safety. In the lead-up to D-Day, General Dwight D. Eisenhower sought to make ground troops feel safer by assuring them they would have air cover. Associating safety with aircraft is no accident. Even in World War I, flyovers showed to troops below that they were protected. The Air Force, in particular, stresses the partnership between air power, global security, and safety at home, in addition to tactical protection of ground troops in combat. With not one, but two recordings of F-86s performing the missing man formation, the 1954 Warner Brothers film The McConnell Story brought the lore of the display into theaters across the United States. Particularly through partnerships with Hollywood, aviation became one of the most visible reminders that Americans were safe at home during the Cold War; from Strategic Air Command to Top Gun, movies equated air power with patriotism.

Flyovers are an American tradition, fitting for the country that produced the Wright Brothers. However, flyovers have worldwide roots and worldwide flavor. The British also performed flyovers on the Western Front during World War I, and “the fly past” remains a tradition in the British, Canadian, and Australian armed services. During the Coronavirus pandemic, the Italians were the first to begin aerial flyovers—synchronized to opera—as a morale booster. These displays are not without their own risks.  A Canadian fly past last Sunday ended in tragedy when a pilot was injured and a public affairs officer was killed after one of the famed Snowbird CT-114 Tutor aircraft crashed in British Columbia

Flyovers may be most important for the feelings of awe they produce. Whether at a sports event or an air show, the flyover is a sign of speed, power, and expertise. Over a battlefield or a funeral, the symbolism of the missing man is a fitting farewell for those who serve in the air.  The feeling of safety that air power symbolizes is a connecting thread between World War I doughboys and healthcare workers across the United States, even if the situation is different.  The flyover is one American tradition that carries on, even as so much else has halted during COVID-19.

“History of the Flyover,” Hill Air Force Base https://www.aerospaceutah.org/military-flyovers/. 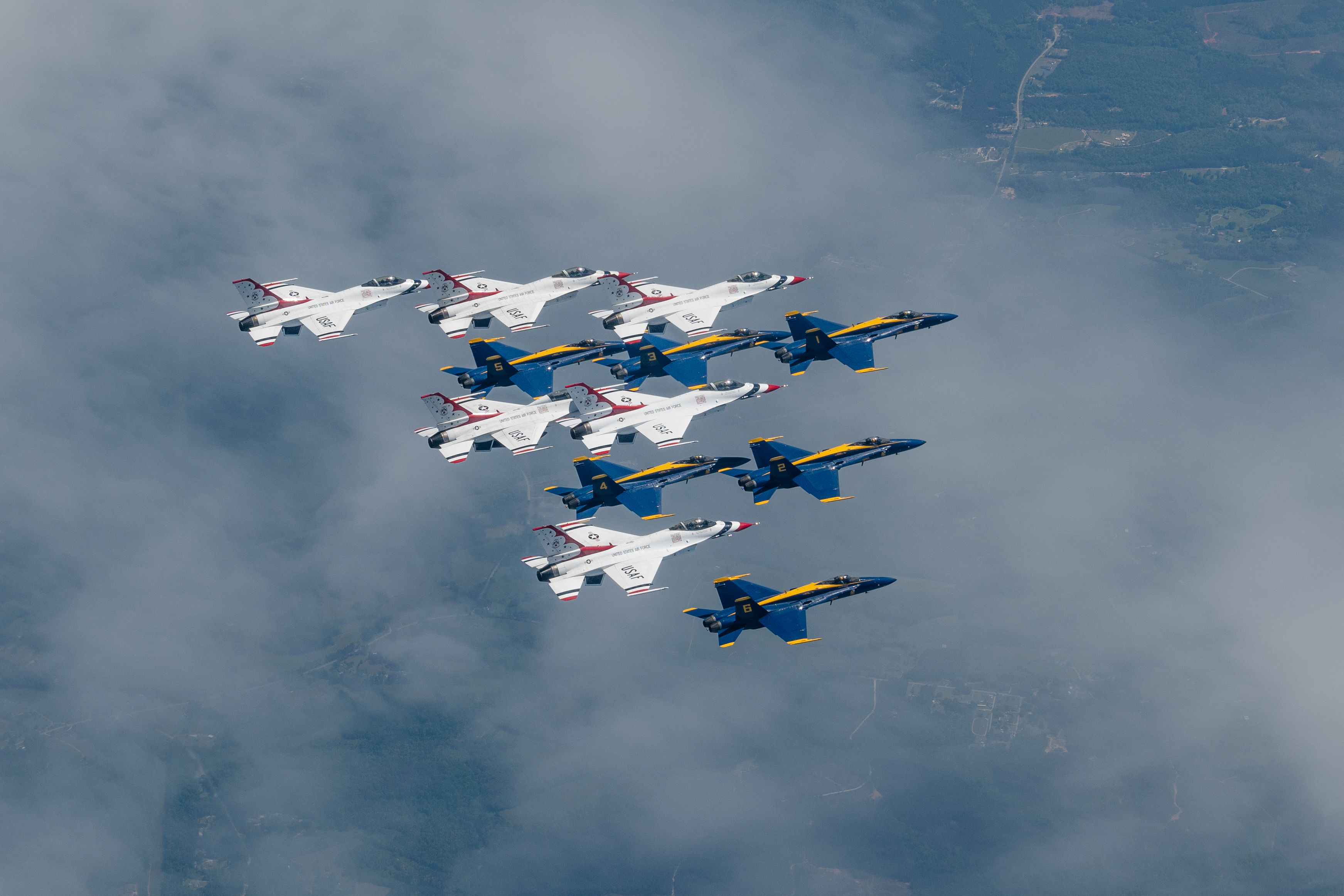 Major Summers Lowe is a curator of modern military history at the National Museum of American History, Smithsonian Institution, an officer in the District of Columbia Army National Guard, and a nonresident fellow at the Modern War Institute at West Point.