Skip to main content
A most venerable vessel: The historic cruiser Olympia marks a milestone anniversary this year.
ALAMY

In a remote Pacific locale in the 1940s and ’50s, the United States conducted a series of nuclear weapons tests, sinking warships, tanks, and other vehicles. Today, 180 feet down on the floor of Bikini Lagoon in the Marshalls, a dozen wrecks—some of them the size of an ocean liner—lie as vestiges of a simulated nuclear battlefield.

In December, researchers from the University of Delaware and the underwater archaeology firm SEARCH announced they had brought the latest oceanic technology to bear in mapping the complex deep-sea tableau of Bikini Atoll test sites.

“It has been 30 years since the last archaeological work at Bikini,” said SEARCH Senior Vice President Jim Delgado. “The last three decades have seen tremendous leaps forward in surveying technology; we planned this as a team to take the latest technology and add a new dimension in terms of large- and small-scale detail to our understanding of the physical remnants of the Bikini nuclear tests.”

Art Trembanis, associate professor at the University of Delaware’s College of Earth, Ocean, and Environment, led the team in sweeping the seafloor to establish the general contours of the ships and surrounding seascape. “In short order, the team produced a detailed, three-dimensional map of the simulated nuclear battlefield, with every ship accurately pinpointed,” Delgado said. “This is the largest undersea battlefield surveyed and mapped, and it is a game changer in assessing major events that have left a profound footprint on the seafloor. What Art and the team have done is given the world its first-ever look beneath the sea into the heart of an atomic explosion and its aftermath.”

“When people think of that photo with the mushroom cloud, that’s where we were,” Trembanis told UDaily. “You see how dwarfed these massive ships were by that blast,” he said. “In many ways, I was struck by it being this idyllic, beautiful Pacific island and I thought ‘This was the site of the most violent explosions on the planet.’”

For Delgado, who also worked on the earlier mapping efforts at Bikini in 1989–90, the results were especially meaningful.

“As we have seen in the past year, undersea technology is finding the lost ships of the war, even at great depth, and these types of projects are adding much more
detail and understanding as we assess the loss of these ships. We are at the cusp of what I believe will be a decade in which many of the mysteries of the sea will be solved and a number of stories not known to current generations will be come to light,” he said.

To the Deepest Depths 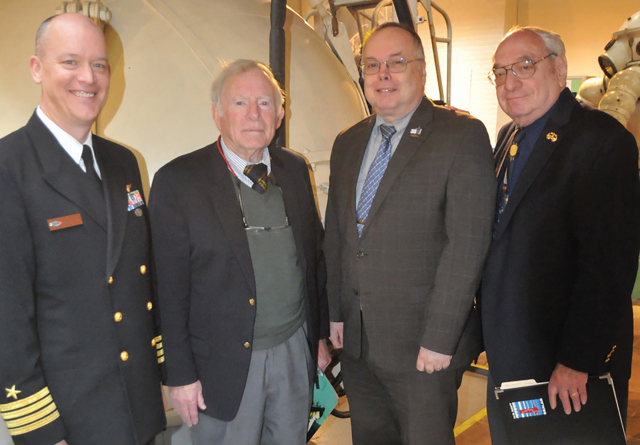 On 23 January—60 years to the day after the bathyscaph Trieste became the first craft to reach the deepest part of the Earth’s oceans—the achievement was commemorated at the National Museum of the U.S. Navy in Washington. Speakers, pictured in front of the Trieste’s pressure sphere, included (left to right) Captain Matt Farr of the Office of Naval Research Global; Don J. Walsh, who was on board the vessel for the historic dive; Rear Admiral Samuel Cox, director of the Naval History and Heritage Command; and naval historian Norman Polmar. 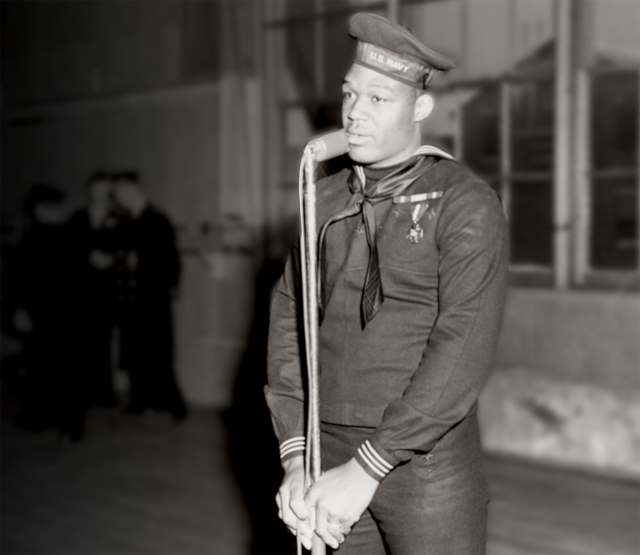 Acting Secretary of the Navy Thomas B. Modly announced the naming of a future aircraft carrier the USS Doris Miller (CVN-81) during a Martin Luther King Jr. Day ceremony at Pearl Harbor, Hawaii, on 20 January. Doris “Dorie” Miller saved the lives of a number of his shipmates and then fought attacking Japanese forces during the 7 December 1941 raid on Pearl Harbor. He was awarded the Navy Cross—the first African American to receive the honor. He was killed in battle in 1943. “Dorie Miller stood for everything that is good about our nation,” said Modly. “His story deserves to be remembered and repeated wherever our people continue to stand the watch today.”

The USS Olympia celebrated her 125th birthday in February. The former Navy cruiser served as Admiral George Dewey’s flagship at the 1898 Battle of Manila Bay and later brought the World War I Unknown Soldier home from Europe. Berthed in Philadelphia, the Olympia has served as a museum ship for almost 70 years.

Planning efforts include connecting with family members of the Navy crew that served on board the ship in 1921, as well as descendants of the Marine Corps Honor Guard that accompanied the Unknown Soldier. The goal is to invite these family members to anniversary celebrations.

The Flagship Olympia Foundation is tracking down the families through research conducted at the National Archives and through documents shared on Ancestry.com. The organization also is working with other military organizations, such as the Jewish War Veterans of the USA and the National Naval Officers Association, to identify the crew members.

The Olympia is one of two World War I ships still in existence. She hasn’t been dry-docked in 75 years, and the Flagship Olympia Foundation is working with Congress to obtain a one-time appropriation to clean the ship’s hull. Doing so will help ensure she stays afloat for another 125 years. For more information, visit https://flagshipolympia.org.

The Naval History and Heritage Command (NHHC) hosted a ceremony in December in honor of the National Museum of the United States Navy (NMUSN) receiving its reaccreditation from the American Alliance of Museums (AAM), joining the ranks of museums such as the Smithsonian American Art Museum and the White House Office of the Curator.

Chief of Naval Operations Admiral Michael Gilday, the most senior military officer of the Department of the Navy, acknowledged the achievement by NMUSN in a tweet, stating: “Bravo Zulu to the National Museum of the United States Navy on their recent accreditation. Based on a rigorous peer review, accreditation means the NMUSN meets the highest standards and best practices for museums in the U.S.”

In its accreditation, the museum was singled out for exemplary practices in long-range planning, as well as its educational outreach programs and guided tours.

“When you think of accreditation you think of the Smithsonian standard,” said Jeffrey Barta, assistant director of NHHC’s Navy museums division. “NHHC is the Navy’s only history organization, and we are the keepers of the Navy’s history and heritage. These museums are the property of the American people, and we want to make sure we are taking care of our priceless heritage assets using the best practices possible.”

AAM accreditation brings national recognition to a museum for its commitment to excellence, accountability, high professional standards, and continued institutional improvement. Developed and sustained by museum professionals for more than 45 years, the AAM’s museum accreditation program is the field’s primary vehicle for quality assurance, self-regulation, and public accountability.

“Accredited museums are a community of institutions that have chosen to hold themselves publicly accountable to excellence,” said Laura L. Lott, AAM president and CEO. “Accreditation is clearly a significant achievement, of which both the institutions and the communities they serve can be extremely proud.” 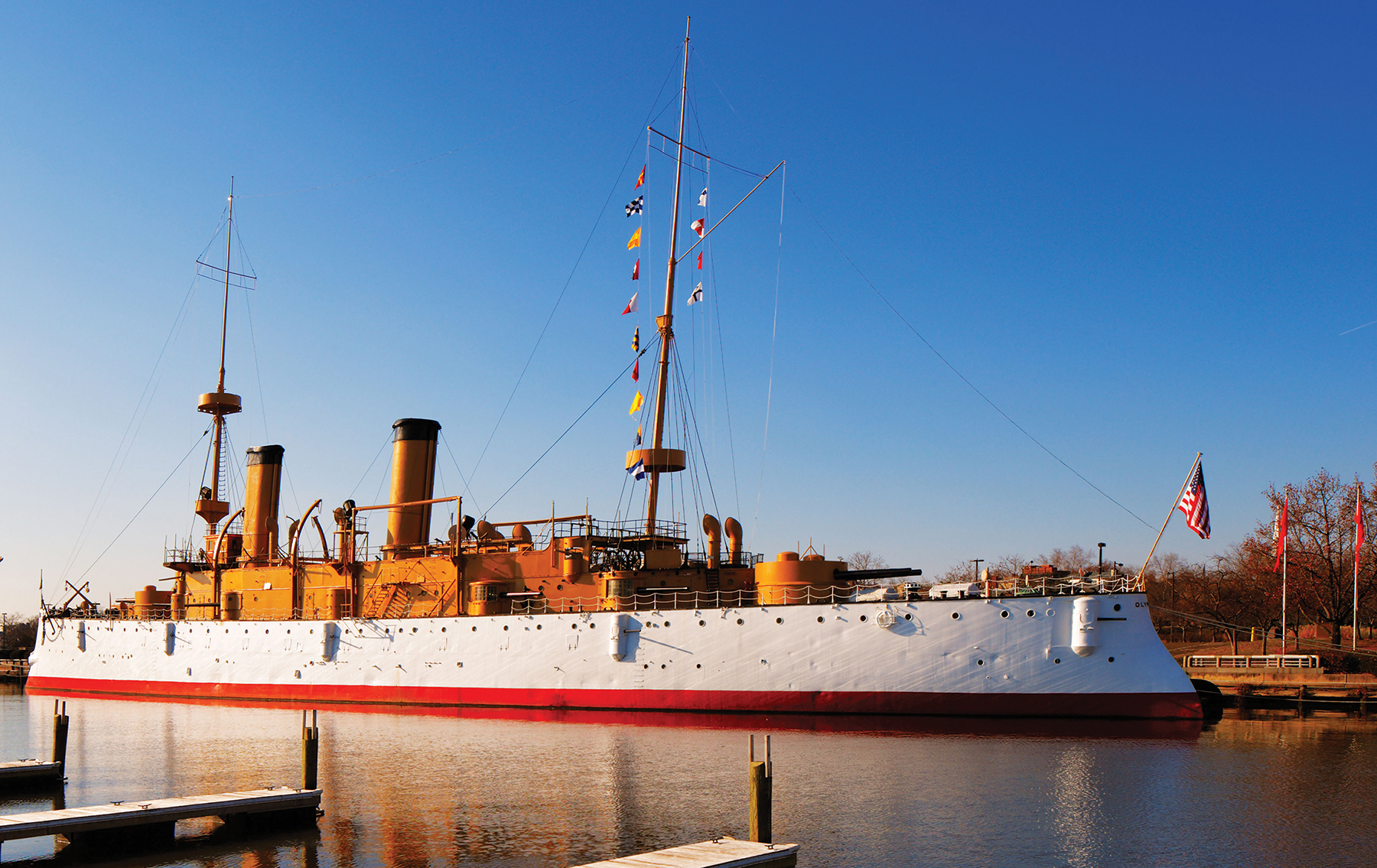 A most venerable vessel: The historic cruiser Olympia marks a milestone anniversary this year.
ALAMY