Skip to main content
A Nieuport 28 takes off from a platform atop a 14-inch gun turret on a U.S. battleship about 1921. Note the hydrovane under the engine. The U.S. wing markings included a red circle within the star insignia (deleted in 1942 because of confusion with Japanese aircraft markings); the tail fin has vertical red, white, and blue stripes.
U.S. Navy

The U.S. Army, Navy, and Marine Corps pilots in combat during World War I flew almost exclusively European-designed and -built aircraft. In his final war report, General John Pershing, commander of U.S. ground forces in Europe, wrote, “In aviation we were entirely dependent upon our Allies.”1

One of the most popular fighters of the later stages of the 1914−18 conflict was the French-built Nieuport 28. Designed by Gustave Delage, it was one of a highly successful line of fighters that continued a design philosophy of a lightweight and highly maneuverable aircraft. Beyond the French air service, the earlier Nieuport fighters were flown by Britain’s Royal Naval Air Service and Russian military aviation. Although not flown by the U.S. Navy during the war, it had a role in post-war naval aviation development.

The prototype Nieuport 28 made its first flight on 14 June 1917. By the time the aircraft became available, the SPAD XIII already had been chosen to equip French fighter units and was the first choice for the projected U.S. Army “pursuit” squadrons.2 However, a shortage of SPADs led to Nieuport 28s being flown by four of the U.S. squadrons between March and August 1918, making them the first aircraft to see operational service with a U.S. pursuit/fighter squadron. The American Expeditionary Forces (AEF) acquired 298 Nieuport 28s directly from the factory; the aircraft was not flown in Europe by either the U.S. Navy or Marine Corps.

The Nieuport 28 was a relatively innovative design in the Nieuport fighter series, with biplane wings of equal size while most previous fighters in the line had a smaller lower wing. Ailerons, which were controlled via an arrangement of torque tubes, were fitted only to the lower wings. The leading edges of the wings were plywood structures, which proved to be structurally weak in service. While the aircraft was successful, it became necessary to reinforce the leading edges, and by the time the problem was solved, the AEF had gone over to the SPAD XIII.

Still, Nieuport 28s of the AEF’s 94th Pursuit Squadron became the first U.S. aircraft to see combat when, on 14 April 1918, two pilots shot down two German aircraft. By summer, most of the U.S.-flown aircraft were replaced by SPAD XIIIs.

After the war, the Army brought about 50 aircraft back to the United States, 12 of which were obtained by the Navy in August 1919. The planes were assigned Navy serial numbers, but they were not given a Navy designation.

The Navy aircraft were assigned to the fleet and flown off platforms affixed to a main battery turret and guns of eight battleships. These “naval aircraft” were provided with emergency flotation bags, and hydrovanes were installed to prevent them from nosing over in the event of an emergency water landing. They were launched by the ships sailing into the wind and turning their main battery turret with the platform into the wind. The aircraft then were to land ashore.

The Nieuport’s career in the U.S. Navy was brief. Others brought back to the United States did serve in Army aviation, and a number found civilian use, especially in the many Hollywood films about the Great War. 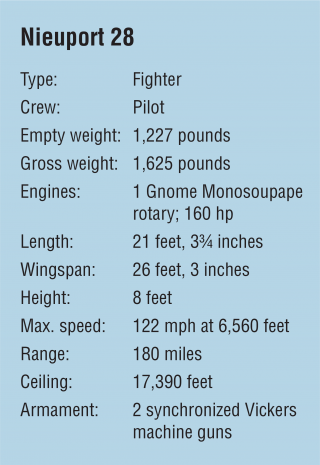 2. The aircraft was developed by the Société Pour L’Aviation et ses Dérivés (SPAD).