When I take an out-of-town trip, I always try to squeeze in at least a brief visit to a historical site—be it a museum, ship, or battlefield. Naval History readers, I suspect, try to do the same.

To help you plan trips to historic nautical destinations, or just to take you on an armchair visit to them, we publish Museum Report in each issue. The one-page articles often can only scratch the surface of a particular location's naval history, but in this issue, we're giving you more.

Tom Huntington's article about the Charlestown Navy Yard and the USS Constitution is the first of periodic longer feature stories that will delve into the history of a particular travel destination while providing the logistical information to help you plan a visit there. The former editor of Historic Traveler and American History magazines, Tom has vast experience in mixing history and travel, and the Boston area—home of the Constitution and the navy yard—is arguably America's maritime heritage hotbed. Complementing Tom's article is frequent Naval History contributor retired Commander Tyrone Martin's account of his stint as a modern-day captain of the Constitution, which is the world's oldest commissioned warship still afloat.

While Commander Martin is one of the leading authorities on the Constitution, Dr. James Bradford and retired Navy Reserve Rear Admiral Joseph Callo are noted experts on John Paul Jones, who was memorialized by President Theodore Roosevelt and other dignitaries at the U.S. Naval Academy 100 years ago. Dr. Bradford marks the centennial of that event with an article about what a present-day Roosevelt might say about Jones and his life's lessons, and Admiral Callo recounts the naval hero's service in the Russian Navy and how he fared in battle against the Turks. Admiral Callo's biography of Jones, John Paul Jones: America's First Sea Warrior, is due out in March from the Naval Institute Press.

Another noteworthy Naval Institute Press release is Black Shoe Carrier Admiral: Frank Jack Fletcher at Coral Sea, Midway, and Guadalcanal, by World War II naval aviation expert John Lundstrom. The book is scheduled to be released in May, but you can get an early look by reading the excerpt in this issue about the tension-filled morning of 7 May 1942 that climaxed with the sinking of the Japanese aircraft carrier Shoho.

Finally, this issue marks the arrival on the Naval History staff of Senior Designer Kelly Erlinger and the return of former Editor-in-Chief Fred Shultz. Fred left the Naval Institute in March 2005, and after trying his hand at editing less engaging material, he's back home. Most of his work time is now devoted to the Naval Institute's Proceedings, but he'll be helping with Naval History as time allows. Besides Fred's sharp editing skills, his sage advice will greatly help me ensure that Naval History maintains and exceeds the high standard of quality he helped establish.

It's hard for me to believe, but this issue of Naval History is our fourth to feature a bonus foldout battle/campaign guide. The first, focusing on Guadalcanal, was in the August 2007 issue. To tell the truth, that centerfold, a relatively late addition, was a child of necessity. We had lots of maps to accompany Richard Frank's three articles but little room for them with the stories. Since then, we've tried to refine the process and improve the product.

A problem when trying to take a naval look at the Normandy invasion is that historians have mainly focused on the Allied armies' role, not the navies'. It's no surprise then that many D-Day books published over the past 15 or so years—from Stephen Ambrose's D-Day June 6 1944 to Joseph Balkosky's Omaha Beach and Utah Beach to John McManus' The Americans at D-Day—were written by army, not navy, historians.

A refreshing break from that trend is Gators of Neptune: Naval Amphibious Planning for the Normandy Invasion by Christopher D. Yung, a senior research analyst at the Center for Naval Analyses and the author of three articles in this issue's D-Day package. The first, "The Planners' Daunting Task," examines the years-long preparation behind Operation Neptune, the naval portion of the invasion, which was primarily led by the Royal Navy.

"Action This Day of Days" then takes a look at naval operations on D-Day while mainly focusing on action off the American beaches, Omaha and Utah. The navies' Neptune tasks did not end when they landed the assault troops on 6 June 1944. How they enabled the Allies to win the battle to build up men and materiel in Normandy is the subject of "In D-Day's Wake."

Jumping from 1944 to the present day, Robert S. Neyland's "The Underwater Navy at Normandy" examines the condition of invasion ships and craft sunk off the American landing beaches, and Retired Navy Commander Dan Felger's "Monument to Sacrifice Strengthens Friendship" describes how the most recent D-Day memorial along the Normandy coastline is fostering fraternity.

As with each of our gatefold packages, we received help from far and wide. Jonathan Gawne, author of Spearheading D-Day: American Special Units in Normandy, and his Paris-based publisher, Histoire & Collections (www.histoireetcollections.com/en/), graciously allowed us to use images from their outstanding book. Briton Richard Drew, whose extensive research about German coastal fortifications in France is online at www.atlantikwall.co.uk, provided "The Nevada's Penetrating Shot" photos on page 35. Closer to home, Michael Walling and Paul Stillwell pointed out eyewitness accounts that accompany two of the Operation Neptune articles.

Finally, "D-Day and Beyond along the American Beaches," our gatefold invasion guide, wouldn't have been possible without the tireless toil of Naval History Design Director Kelly Erlinger and Senior Editor Jim Caiella and the financial assistance of the Naval Institute Foundation. The guides are a way for us to give you something extra, and with your support we hope to continue improving our product for a long time. 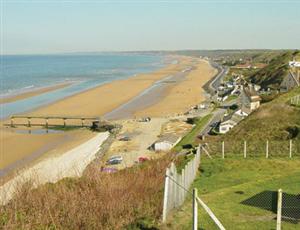 From heights at the western end of Omaha Beach, next to the Vierville draw, German defenders delivered devastating flank fire against D-Day landing craft and assault troops.
Richard G. Latture