Bucher and the Pueblo

A new presidential administration has just taken office. And, as was the case when a different administration arrived 40 years ago, the political and military leaders inherited wars in progress. Back then the United States was dealing with the Cold War generally and the Vietnam War specifically.

One particularly flagrant Cold War incident occurred in January 1968, when North Korean gunboats captured the 900-ton U.S. intelligence ship Pueblo (AGER-2) in international waters. The skipper of the Pueblo, Commander Lloyd M. Bucher, was wounded by gunfire. He surrendered the ship without the crew firing a shot and without disabling the engines. His decision was to protect his crew against the casualties that might have resulted from resistance.

North Korea held the crew in prison until December 1968, the month before President Lyndon Johnson left office. Dealing with the aftermath fell to the incoming administration, that of Richard Nixon. And it fell to the leadership of the Navy to deal with the thorny problems raised by the incident. Admiral Thomas Moorer, the Chief of Naval Operations, wanted to see Commander Bucher punished as a lesson to the Navy's commanding officers—don't give up the ship, especially without a fight.

The officer who headed the East Asia politico-military shop on Moorer's staff was Captain William J. Crowe Jr. Twenty years later, as a four-star admiral, he was Chairman of the Joint Chiefs of Staff. Because the incident fell in his geographical bailiwick, in 1968 he attended a series of meetings chaired by Admiral Bernard Clarey, the vice chief of operations. The meetings produced contentious debate among half a dozen different fiefdoms, both inside and outside the Navy, that wanted to be in charge. Crowe sat through the meetings as a bemused bystander while the squabbling went on. But finally Clarey tabbed Crowe to write the repatriation plan because he seemed to be the only person in the room who had no vested interest in the issue.

Admiral Crowe's 1993 published memoir, The Line of Fire, and his oral history—the latter recently released by the Naval Historical Foundation in Washington—provide an insider's account of the crew's return. Moorer assigned Crowe the lead role in an "I want it right away" investigation of what happened to the Pueblo men during their bleak months in North Korea. Johnson and Moorer were particularly interested in finding out whether the men of the Pueblo were tortured while in prison.

Once the crewmen were released and reached San Diego, Crowe and his team questioned them and learned of multiple incidents of torture. Crowe and his assistants wrote the report of their investigation on a red-eye flight back to Washington. The report went to President Johnson, who had threatened action but took none. He had only a few weeks left in office and was not in position to start another war in addition to the one in Vietnam.

Early in 1969 a court of inquiry began, with Commander Bucher on the hot seat. In some ways his position was a sympathetic one. He had suffered at the hands of the North Koreans. Moreover, he had been sent on what turned out to be a hazardous mission, but his seniors in the chain of command had not foreseen the hazards nor devised any plan for protecting the ship. Bucher was a submarine officer who had been deemed unsuitable for a submarine command, but he was held to the standard for the front-runners who got the better jobs.

Bucher's civilian lawyer was a Naval Reserve captain named Miles Harvey. Crowe recalled that Harvey did a superb job in dealing with the admirals who made up the court. He got for Bucher the opportunity to tell the emotional story of his ordeal in open court. The public did indeed sympathize with him. Harvey thus outmaneuvered those in the Navy who thought Bucher should have battled harder, that he should have gone down with the ship rather than surrender.

It became apparent to Admiral Moorer and the new Secretary of the Navy, John Chafee, that the public would not abide punishment for Bucher. The president of the court, Vice Admiral Harold Bowen, was called to Washington to be advised on the climate of opinion. Nevertheless, the admirals on Bowen's panel recommended that Bucher be court-martialed.

The report then went to Admiral John Hyland, commander-in-chief of the Pacific Fleet, for his endorsement. Hyland, under whose command the Pueblo had operated, initially also called for Bucher to face court-martial. But Clarey, the VCNO, directed Crowe to get on the phone with Hyland and essentially to dictate what he should say in his revised endorsement. Hyland would have to recommend no further action be taken against the ship's skipper. In a decision announced in early May of 1969, Secretary Chafee said that Bucher had already suffered enough. The political aspects of the case had overruled the naval tradition of holding the skipper accountable. 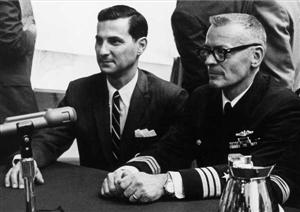