Skip to main content
The lead plane of the second section of Observation Squadron 18, assigned to the Nevada

From 24 February 1930—when the Bureau of Aeronautics issued preliminary instructions pertaining to the identification of aircraft—until the beginning of World War II, the U. S. Navy and Marine Corps had some of the most colorful aircraft in the world.

Color photography was just becoming available to the general public at a reasonable price in 1940 when these photos were taken. The photographer was Lieutenant (junior grade) Francis F. Hebel, who flew from the Nevada (BB-36), which was based at Pearl Harbor. Shortly after these photos were taken, Lieutenant Hebel was transferred to a carrier-based fighter squadron, VF-6, and was killed while trying to land at Ford Island following the Japanese attack on Pearl Harbor.

While the carrier-based squadrons have always been looked on as the "glamour boys" of naval aviation, the ship-based squadrons were the "forgotten men." Based on board battleships and cruisers, with just enough personnel to operate the three or four aircraft attached to each ship, they were cut off from the mainstream of naval aviation and operated as a component of the ship's complement. Recognition for excellence in spotting for naval gunfire was dependent upon the proficiency of the entire ship's gunnery department, rather than being based solely on the flight crews' skills, as in the case of carrier- and shore-based squadrons.

When the ship-based squadrons were first introduced, they were greeted with something less than enthusiasm. The planes had to be launched before the main battery guns could be fired or the aircraft would be damaged by the blast. Upon completion of a spotting mission, the ship had to turn out of position in order to recover the planes. Then, too, there were some who just thought they cluttered up the decks!

The floatplane crews lived an exciting and dangerous part of naval aviation. Every takeoff was a catapult launch during a time when rolling takeoffs were the norm. Each landing was in the open sea with all the problems of wind and waves encountered by those flying the large flying boats. To lessen the problem of landing, the ship would make a turn so that her wake would create a slick for the aircraft to land on. A sled would then be towed alongside the ship, which the pilot would taxi up onto and cut the throttle. A hook on the bottom of the float would engage the sled so the aircraft would be towed at the same speed as the ship. The plane's crew then had to attach the hook from the ship's crane to be hoisted aboard. While this maneuver was being accomplished, the deck crew used long poles to fend off the aircraft so it wouldn't be damaged against the side of the ship.

The Curtiss SOC floatplanes in these pictures show how colorful the aircraft could be. The red empennage identifies the plane as belonging to Observation Squadron One (VO-1B) assigned to Battleship Division One of the Battle Fleet. The white engine cowls and chevron on the top of the upper wing show they are the second section of the squadron which was based on board the Nevada (the second ship in the division). The first, third, fourth, fifth, and sixth sections were to be identified with the colors red,blue, black, green, and yellow. The ship's name is also applied to the rear of the fuselage. The colored band around the fuselage identifies the section leader, as does the fully painted engine cowl. Number two wingman has the top half of the cowl painted, while number three has the bottom half painted. The squadron number, type, and aircraft number are shown on the side of the fuselage, as is the squadron insignia. In the event a plane was forced down, the yellow top surface of the wing was an aid in locating the aircraft. Introduced in 1934, these SOC floatplanes served into the early days of World War II, and were the last combat biplanes in the Navy to serve with the fleet.

The training command painted their aircraft in accordance with a different set of instructions than the fleet. Everyone knew and recognized the aircraft used for preliminary training by its overall yellow color. This Naval Aircraft Factory-built N3N is a good example of the Yellow Peril.

Major Elliott is a historian in the Naval Aviation History and Archives branch of the Naval Historical Center. He is currently working on a four-volume series entitled The Official Monogram U. S. Navy and Marine Corps Aircraft Color Guide, of which Volume I, covering 1911 to 1939, has already been completed. 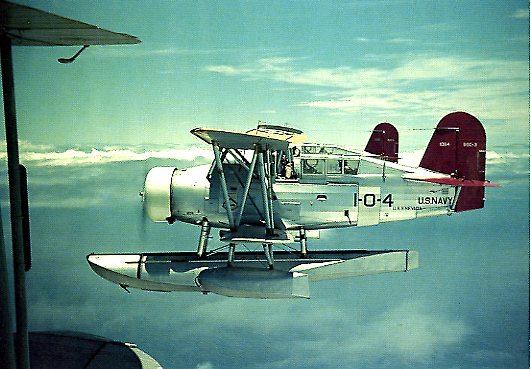 The lead plane of the second section of Observation Squadron 18, assigned to the Nevada 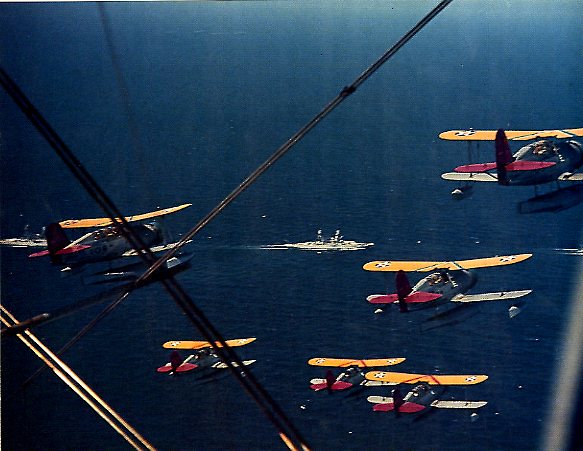 The number two pilot from the Nevada 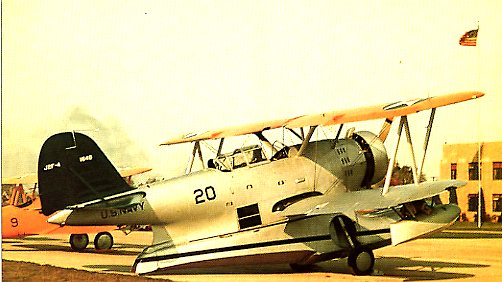 Typical flying attire for this period, including soft helmet and life preserver