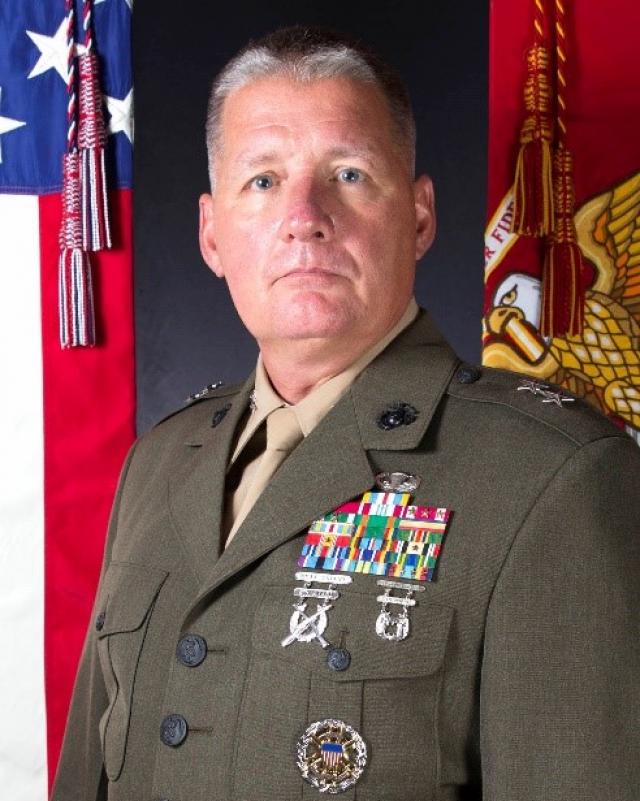 Born and raised in Oklahoma City, Brigadier General King was commissioned out of the University of Oklahoma. He has served in all three Marine Expeditionary Forces (MEF) and with all four elements of the Marine Air-Ground Task Force. His tours of duty include the Mountain Warfare Training Center-Bridgeport, California, Marine Forces Reserve in New Orleans Louisiana, Marine Corps University as the Director of the School of Advanced Warfighting, Joint Duty with the Institute for Defense Analyses, and as the Chief of Staff, 1st Marine Expeditionary Brigade.

In 2003 he was assigned to I MEF for Operation Iraqi Freedom. During that same year he reported to II MEF and served as the Pacific and European Command Regional Plans Officer and as the Future Operations Officer for II MEF (Forward). In 2005 he reported to 1st Marine Aircraft Wing for duty as the Commanding General’s Staff Secretary and as Commanding Officer, Marine Wing Support Squadron (MWSS) 172. He later commanded Combat Logistics Regiment (CLR) 15, I MEF and 3d Marine Logistics Group, III MEF. He is currently assigned as Deputy Director for Strategy, Plans and Policy—Asia, J5, Joint Chiefs of Staff.

He is a graduate of Summer/Winter Mountain Leaders, Amphibious Warfare School, Naval Command and Staff, the School of Advanced Warfighting, and the National War College. He holds a Master of Arts in Strategic Studies and a Master of Science in National Policy. He is married to the former Ms. Ann Fenton, also from the great state of Oklahoma. They have two children, Chase (23), a First Lieutenant in the United States Marine Corps, and Sydney (21), a student at the University of Oklahoma.